A Pakistani man stands on a dry portion of the Rawal Dam in Islamabad. Church groups across the region are urging world leaders to take action during the Paris climate change conference starting Nov. 30. (Photo by Farooq Naeem/AFP)

Church groups from across South Asia are urging world leaders to take immediate action to protect the environment, ahead of a key global summit on climate change.

The call comes from church activists in countries that are among the world’s most vulnerable to the effects of climate change. This sense of urgency has been prompted in part by Pope Francis’ May encyclical on the environment, Laudato si’, in which the pope warned of "the spiral of self-destruction which currently engulfs us."

In India, lashed by increasingly unpredictable weather, the message has been heard in Delhi Archdiocese, where the diocesan social service wing, Chetanalaya, has programs that focus on environmental issues in the community.

"It is the first time that any pope has come out with an encyclical for the whole of humanity and not just the Catholics. So it is our duty to follow what he has said and try to rectify the damage being caused to our mother earth," said Father Savari Raj, Chetanalaya’s director.

Environmental scientists believe climate change will trigger new levels of unpredictability in severe weather events, such as droughts and floods. It’s a major worry in countries like India, Pakistan, Sri Lanka and Bangladesh, where large portions of the population live in poverty.

Already in India, the country has witnessed a series of calamities related to climate change. This month, a deluge in southern Tamil Nadu state was termed the heaviest in a decade, killing a reported 70 people. India’s chief meteorologist told local media that the deadly floods "fit the larger picture of climate change."

Conversely, states like western Maharashtra have witnessed scant rainfall for years; not coincidentally, the state is home to an alarming number of farmer suicides — 300,000 deaths in the last 10 years in the state alone, according to Vidarbha Jan Andolan Samiti, a farmers’ rights organization. 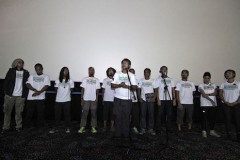 Will faith lead to action on climate change?

In Pakistan, the sense of urgency has also spread to church groups in the country’s relatively small Catholic community.

On Nov. 21, hundreds of people turned out for an interfaith rally in Lahore, echoing calls to world leaders from activists across the subcontinent. The 2015 United Nations Climate Change Conference is scheduled to begin Nov. 30 in Paris.

"The time is now. People of faith from different communities living in Pakistan are very much concerned about the environment," said Columban Father Liam O’ Callaghan, the Lahore-based coordinator for the Columban Justice, Peace and Integrity of Creation.

During the demonstration, participants from across the faith divide, including Muslims, Hindus, Sikhs and Christians, urged world leaders to take meaningful action on climate change.

Haroon Akram Gill, secretary-general of the Green Save Foundation, said Pakistan is already seeing the effects of climate change.

"In our country, we are facing environment degradation, water pollution and problems in sanitation as well as agriculture, which is affecting our livelihoods," he said.

It’s a message echoed in Bangladesh, where much of the country lies on flat land only a few meters above sea level, making it vulnerable to natural disasters.

"God forgives people and people forgive each other. Nature doesn't forgive us for our mistakes," Sarkar said.

In the island nation of Sri Lanka, there is a small yet growing environmental movement burgeoning within the local church, spurred in part by the pope’s encyclical.

The government’s meteorology department predicts that fluctuating monsoon patterns caused by climate change could cause water scarcity in parts of the country, placing a heavy burden on marginalized farmers.

The Intergovernmental Panel on Climate Change — a scientific body set up through the United Nations — predicted that overall crop yields in South Asian countries could plummet by 30 percent by the end of the century.

And a new U.N. Children's Fund report released Nov. 24 highlights the disproportionate dangers of extreme weather on children across the globe.

"Climate change will not affect all equally," the report stated.

"Flood and drought zones often overlap with areas of high poverty and low access to essential services such as water and sanitation. This means that children and families who are already disadvantaged by poverty … are likely to face some of the most immediate dangers of climate change." People pray on the day marking the feast of Christ the King on Nov. 22 in New Delhi. (Photo by Bijay Kumar Minj)

Time will tell whether world leaders in Paris will be able to hammer out their stated goal: a legally binding global pact to reduce emissions and the effects of climate change.

Back in India, however, Catholics are trying to make a difference, albeit on a much smaller scale.

On the day marking the feast of Christ the King, Nov. 22, roughly 13,000 Catholics in Delhi took a pledge to protect the environment, by following five commandments to be implemented in their daily lives, including using energy-efficient light bulbs, reducing car use and composting at home.

Such steps may be a drop in the bucket compared to what climate scientists believe is needed to address climate change. But to Catholics who took the pledge, they carry meaning.

"I know about Pope Francis’ call to save the environment. By taking this pledge, we would work more seriously toward saving nature," said Lisa Mathew, a Catholic who attended the feast. "We cannot always take from the earth. It is time we give our care and love to it."