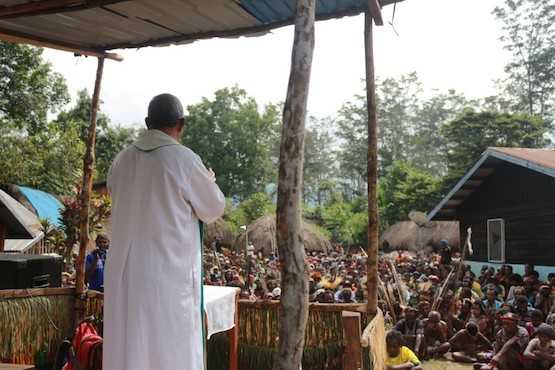 Indonesian Father John Djonga has continually found himself in trouble with security forces in West Papua.

In the latest incident, Father Djonga, a priest of Jayapura Diocese and a renowned human rights defender, was questioned by the police for his role in leading an ecumenical prayer service for the inauguration of the Papuan Indigenous Council Center in Wamena, which is also an office for the United Liberation Movement for West Papua.

Around 5,000 Papuans from various denominations attended the ceremony.

The allegation against Father Djonga is treason, an accusation that has put many Papuans behind bars as political prisoners and a few others executed through extrajudicial killings. Progressive Protestant leaders such as the Rev. Benny Giay and the Rev. Yoman Socrates also faced such accusations and now are under strict military surveillance, as confirmed by leaked military documents in 2011.

In 2008, Father Djonga had similar trouble as a parish priest in the remote area of Keerom in Papua as he was defending indigenous Papuans fighting against land grabbing, deforestation, and military violence on the border with Papua New Guinea.

The priest also criticized the involvement of security forces in illegal logging, which caused him trouble when the military's special forces troops, known as Kopassus, allegedly urged him to keep quiet or he would be buried alive. The civil society networks then rescued him, but when he returned to Keerom, instead of remaining silent as he was warned, he continued his work and established a human rights foundation.

In his defense, Father Djonga asked authorities also to reveal a phone list of his containing the numbers of Indonesian police and military officials, and announce the names of all Jakarta officials, including ministers, who had contacted and communicated with him.

He told investigators at that time that as a pastor, it was his duty to bridge communication and dialogue with all parties, without resorting to the use of violence.

Churches often proclaim their concerns for human rights and their mission of liberating the oppressed. However, in complicated situations like in West Papua, where the state and corporate powers conspire against the well-being of the people, concerns for human rights and solidarity with the oppressed are not as simple as preaching from a podium or publishing a pastoral letter.

In everyday reality, defending the rights of Papuans means a confrontation with dominant groups, such as the state apparatus and corporate oligarchies. The dilemma in defending the indigenous' rights to their land and forests means fighting against investors and politicians, many of whom are also Christians and donors to the development of churches.

Does the church choose solidarity with the people at the expense of development donations? This is an option with a cost that not all church leaders are willing to absorb.

Voice of the Voiceless

Churches are often idealized as the voice of the voiceless. But in Papua, the people are not voiceless. They have been speaking up, crying out, asking for help and seeking solidarity, while their struggle has withered on for decades. It is the churches that are often voiceless. The leaders of institutional churches — whether in Papua, on the national level and global — have remained silent to the struggles of Papuans seeking self-determination.

The Indonesian bishops' conference and the Communion of Churches seem to have aligned themselves with the government's developmental and security approach in Papua. The Papuans' experiences of systemic violence, discrimination, resource appropriation, marginalization, neglect of rights to self-determination are ignored.

Despite the silence of the institutional churches, the grass-roots church groups in Papua managed to grow and consolidate. The basis for those movements is similar to the independence declarations in Indonesia's 1945 Constitutions: "independence/freedom is the inalienable right of all nations, therefore, all colonialism must be abolished in this world as it is not in conformity with humanity and justice".

This struggle for self-determination has strong Christian foundations, as eloquently summarized by the theologian and anthropologist, the Rev. Giay: "The Christian faith proclaimed by the church has provided a great power of faith to the people who live under the oppressions."

The church and the Bible are felt as the power of emancipation. Christian salvation and liberation is not understood as a matter of heaven, but liberation from human rights violence, discrimination, and marginalization.

These communities and grass-root churches delink themselves from the authority assumed by the state and corporations, and followed by mainstream churches. They established other visions of a good life in which survival, well-being and dignity of the people, their nature, and culture is the priority.

As another Papuan human rights advocate, a Catholic woman Yosepha Alomang puts it: "The church is a mother, who should be here in the everyday life of her children, giving them life, protecting them when they are threatened, defending them when they are discriminated, and walk with them toward a decent life."

It is this political faith and theology of liberation in which the religious gathering at the inauguration of indigenous council's office in Wamena was held.

This is the test of history for the churches in Papua and Indonesia in general.

Cypri Jehan Paju Dale is an author and researcher at the Institute of Social Anthropology, Bern University, Switzeland.