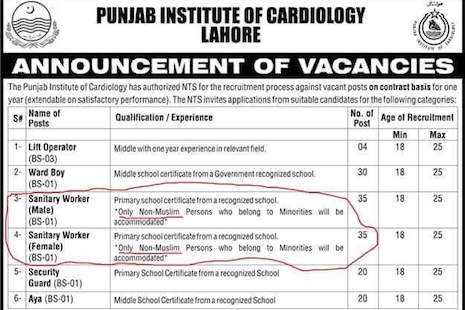 Christian activists say this job advertisement, which appeared in local newspapers in Pakistan in September, is discriminatory because it tries to fulfill court-mandated job quotas for religious minorities using only jobs involving menial labor. (Photo supplied)

Activists for Christians in Pakistan have denounced a recent government job advertisement as "discriminatory and insulting" toward religious minorities because it specifies sanitation jobs for only non-Muslim people.

The advertisement, which appeared in local papers in September, seeks recruits for a variety of positions, including a lift operator and sanitation workers. However, only the sanitation jobs are specified to be targeted toward non-Muslims.

"Only non-Muslim persons who belong to minorities will be accommodated for both male and female sanitary workers," reads the advertisement, which was issued by the Punjab Institute of Cardiology in Lahore. Activists say the job ad is a prime example of "institutional discrimination" against religious minorities.

In a landmark ruling last year, the Supreme Court of Pakistan mandated a quota system for religious minorities in the Muslim-majority country. The judgement ruled that 5 percent of government jobs must be set aside for religious minorities. Critics say the rule is rarely enforced. Even when it is, the reserved jobs are often found only in sectors not seen as desirable by mainstream society.

"There is a widespread perception in Pakistan that menial jobs are only meant for Christians and other minority groups," said Peter Jacob, head of the Center for Social Justice, an advocacy group for minorities. "This leads to systematic segregation of the minority communities from the mainstream society."

The advertisement in question is far from an anomaly, said Jacob, who was formerly executive director of the National Commission for Justice and Peace, the human rights arm of the the Catholic Church in Pakistan.

"This is a standard ad, which has been appearing in newspapers for the last three decades. This is a reflection of the deep-rooted discriminatory mindset of authorities towards minorities," he said.

Jacob called on the Supreme Court to ensure its job quota ruling is enforced in a way that is not discriminatory.

"It seems that government authorities [are] deliberately misleading to cover the 5 percent quota by pointing only Christians [to] these menial jobs and systematically humiliating Christians in the eyes of the society," Gill said in a statement.