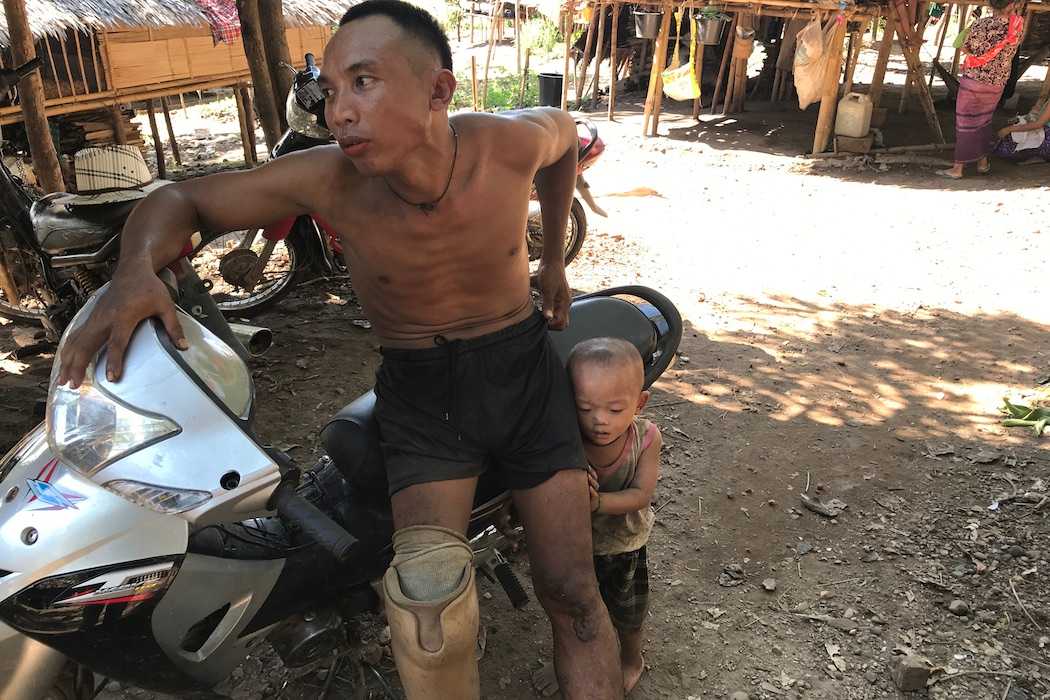 Pha Ngar Toe, a displaced Kayin who lost one of his legs due to a land mine, is pictured with his child at Myaing Gyi Ngu camp for IDPs. (ucanews.com photo)

After fleeing his home in Myanmar's Kayin (Karen) State for the second time in September 2016 due to military attacks against a local insurgent group, Saw Shwe Tun never imagined he would have to spend two years in a camp with no end in sight.

But this is the fate that has befallen the 26-year-old father of three and his family, who remain marooned at one of two camps for internally displaced persons (IDPs) in the village of Myaing Gyi Ngu.

While a greater sense of calm has settled on the state in recent years, due to peace negotiations between the government and armed militias, outbreaks of violence still occur and the IDPs are reluctant to head home due to the threat of land mines and other unexploded ordinance.

More than 4,700 Kayin Buddhists from 28 villages have now taken refuge at the camps in the village, which lies on the east bank of the Salween River some 70 kilometers north of the state capital of Hpa-an. Over 1,000 of the IDPs are younger than five while 60 of the people living there are pregnant women.

Shwe Tun said he returned twice last year to his native Yinmai village in Hlaingbwe Township, part of the conflict-torn Mae Tha Waw area in the same restive, mountainous state — but it was too unsafe to stay.

"Nobody lives there now except the Border Guard Force (BGF) troops who are stationed there. We want to go back but we fear we may have to flee again if more clashes occur," said Shwe Tun from inside the camp, which he now helps to run. Saw Shwe Aung is now in charge of running one of the IDP camps at Myaing Gyi Ngu village. (ucanews.com photo)

His family first escaped the conflict in 2011 and then fled again in 2016 after the military-supported BGF reportedly attacked a splinter group of the Democratic Karen Buddhist Army (DKBA).

"We now rely for our daily meals on aid from donors as we have no jobs and no land on which to farm," he said.

Another of the IDPs, Naw Ma Lay, said she ekes out a living at the camp with nine of her relatives by selling groceries. She set up the store in April after piecing the structure together from bamboo and layering a thatched roof on top.

Ma Lay said there are scant other employment opportunities there, so she borrowed money from her relatives to get the shop going. One of the Kayin Buddhist IDPs at the same camp. (ucanews.com photo)

"There is no regular income for people here so sometimes they come to get the things they need and promise us they will pay up whenever they can," she said, adding she earns up to 10,000 kyats a day (US$7.40).

She has no idea if or when she will be able to safely return home.

As the camps attempt to recreate some semblance of normal life for their guests, a makeshift school has been set up at a nearby building to serve around 400 children aged 5-10.

They are instructed by teachers who were also forced to flee from their homes due to the repeated outbreaks of violence that have since eased. Kayin State is generally considered less dangerous than in previous years since three of the local militias joined five other armed groups in signing a nationwide ceasefire agreement (NCA) with the government and military in October 2015.

Signatories included the Karen National Union (KNU), the largest of the groups which has been fighting the military for the last six decades, the DKBA (also known as the Democratic Karen Benevolent Army), and the KNU/Karen National Liberation Army Peace Council (KPC).

Part of the warfare before that involved the laying of land mines in areas of conflict, as Pha Ngar Toe knows only too well. He lost one of his legs after stepping on one last year as he was returning to his village in the Mae Tha Waw area.

Local aid workers and Red Cross officials helped him by sending him to a government-run hospital in Hlaingbwe.

He said there are no other jobs at the camps, so sometimes he volunteers to help out with menial road work.

"I can't say right now when we will be able to go back home," said the father of six whose family is living at the Myaing Gyi Ngu camp for IDPs.

While Toe lost his leg, two of his fellow villagers lost their lives due to land mines, according to camp officials.

The Landmine and Cluster Munition Monitor's (LCMM) 2017 report states that 71 townships in 10 states and regions are "contaminated" with land mines.

Kayin accounted for 31.1 percent of all mine-related casualties from 2007 to 2016, according to the report, making it the most dangerous state in Myanmar in this respect.

The LCMM ranks Myanmar third after Colombia and Afghanistan in terms of having the highest mine-related casualty rates in the world. Myanmar recorded 3,745 such casualties between 1999 and 2014. Nearby Cambodia is considered another danger spot.

Myanmar is one of very few nations that has yet not signed the 1997 Mine Ban Treaty, while over 80 percent of countries around the world have.

The Myanmar military has laid land mines every year since 1997. Reports also show that most of the country's armed ethnic groups — of which there are at least 20 — have also actively used mines to wage war.

IDPs rarely eat meat in the camps as Buddhism prohibits the killing of animals for food.

Furthermore, they need to help with monk-led projects such as roadwork and building halls for religious purposes.

During a recent visit to the camp, ucanews.com saw a large monastery with several buildings and a project under way to build dozens of stupas.

U Thuzana, an influential monk in Kayin, helped found the DKBA, which split from the Christian-led Karen National Liberation Army (KNLA) in 1994. The division led to more internecine fighting, resulting in many deaths between the two groups.

He launched a campaign in 1992 to build pagodas throughout the state. In 2016, however, he inflamed religious tensions by ordering his followers to build stupas on sites featuring a Christian Church and mosque.

The 70-year-old has spent most of his time lately in Bangkok seeking medical attention due to the poor conditions at the camp. One of his trustees confirmed to ucanews.com that his health is ailing.