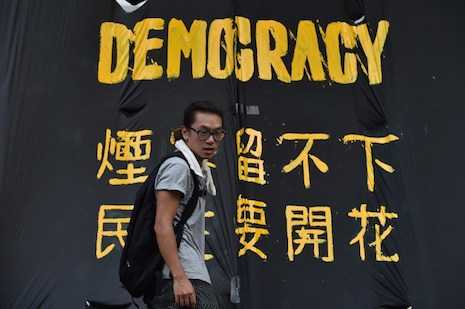 China's National Day could not have come at a worse time for Beijing. Following a lull in protests on Connaught Road and Causeway Bay on Tuesday afternoon, tens of thousands of people in Hong Kong are expected to join rallies on Wednesday as the Communist Party celebrates 65 years of rule on the mainland.

But can Occupy Central maintain its recent momentum? Beijing and Hong Kong's Chief Executive CY Leung clearly think not. They believe Occupy Central now finds itself in a difficult position after making the decision to withdrew riot police on Sunday following increasingly physical confrontations with protesters.

After protest leaders altered their stance from calling for dialogue with Leung to demanding his resignation, the chief executive responded on Tuesday by reminding protesters that if he steps down - or is forced aside by Beijing - a nominating committee will choose his replacement, as happened in 2012. In other words, protesters face a choice between two different brands of Chinese Communist-style “democracy”.

In withdrawing police, Leung has gained the upper hand for the time being. Firstly, Occupy Central said it would halt demonstrations if things got out of hand, which it is yet to do. Similarly, withdrawal of riot police plays into the pro-Beijing message that the lingering protesters are using physical intimidation and even violence against the authorities.

Propaganda is likely to be decisive: In East Asia, only the Japanese have a greater appetite for reading newspapers than Hong Kong's seven million people, and here again the authorities have an advantage.

Of the top-three newspapers in Hong Kong by circulation, two are pro-Beijing ‑ the free Headline Daily and the long-running Oriental Daily.

Mirroring the party line in mainland China, these papers have characterized Occupy Central as violent rule-breakers who represent an extreme minority. Many have also portrayed Occupy Central as a brainwashing force on vulnerable students who started their own protest last Monday.

Some have even created links between protest leaders and foreign meddlers, a favorite Communist Party strategy. Last week, the pro-Beijing Wen Wei Po newspaper accused student leader Joshua Wong, a Christian, of being manipulated by the American government.

This approach was echoed on Monday when the pro-Beijing Oriental Daily, which claims a circulation of half a million copies, drew parallels with the “color revolutions' in Eastern Europe.

“This is a game between powers against the bigger backdrop of the United States' 'pivot to the Asia-Pacific', and an inevitable result of Hong Kong's internal affairs under the influence of international politics,” it printed in an editorial.

Only the Apple Daily, a staunchly pro-democracy Chinese-language paper, has anywhere near the circulation to challenge the pro-Beijing papers in the ongoing propaganda war ­‑ last year it recorded over a quarter of a million daily readers.

It's a tough audience, however. In a city that boasts among the highest property prices ‑ and rents ‑ in the world, worrying about money comes before taking to the streets in protest. As such, people here are considered to have a lower threshold for long, disruptive rallies more commonly seen in cities including Bangkok and Kiev.

This is not lost on the Communist Party. The state-run China Daily, the highest circulation Chinese language newspaper in the world, ran a front-page article on Tuesday on the 1.9-percent decline on Hong Kong's stock exchange on Monday. It then went on to quote a 60-year-old woman who had problems going to a doctor's appointment because of the protests.

Whether or not some of the more far-fetched claims stick ‑ Apply Daily founder Jimmy Lai has been linked to the CIA, for instance ‑ is largely irrelevant.

Directly or through proxies and supporters, the Communist Party controls most of Hong Kong's media and its censorship shackles newspapers and television stations on the mainland. Its political control in both China and Hong Kong works in a similar way.

In biding its time and withdrawing riot police, authorities are clearly hoping that the protests will burn themselves out as an increasing majority is influenced by the anti-protest media messages that surround them and gets tired of disruption.

As the protests enter a critical phase, it's these challenges that will surely determine whether the pro-democracy movement can further test Beijing’s staunch resolve.