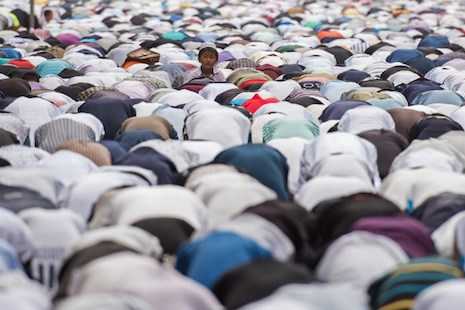 Chinese Muslims perform morning prayers on the street near a mosque in Shanghai on Sept. 24. The Communist Party has moved to solidify its control over religions, with new regulations managing relations with different faiths. (Photo by AFP)

The Catholic Church faces fresh hurdles in China after the ruling Communist Party entrenched its control over all religions, issuing for the first time public rules for the party's department that manages relations with different faiths and other sectors of society.

In a move that fits with the growing anti-Western rhetoric of the Xi Jinping administration, the United Front Work Department has been charged with the "prevention" of overseas involvement in religious activity. Party members are now officially banned from following a faith as part of rules stipulating that religion must be separated from the Chinese state.

This clause has the potential to be a stumbling block in ongoing talks between China and the Vatican about ending China's practice of appointing bishops in the party-run version of the Catholic Church not recognized by the Vatican, observers noted.

The United Front is particularly influential over religious groups because it oversees the State Administration for Religious Affairs, which in turn manages China's five recognized religions — Catholicism, Protestantism, Islam, Buddhism and Daoism.

"The new rule says it is essential for the Chinese Communist Party to unite all forces in society as China transforms itself, with reforms in almost every area," state news agency Xinhua reported on Sept. 23.

Far from uniting China, the new United Front regulations entrench divisions in the world's most populous nation, said Ying Fuk-tsang, director of the Divinity School at the Chinese University of Hong Kong.

"Insistence on church-state separation has rarely been mentioned for years and now it reappears in this regulation," he said. "Religion cannot interfere with politics while the government can interfere with religion."

The new guidelines have been issued amid a surge in popularity of all religions in China, particularly Christianity, Buddhism and Daoism. Some estimates put the number of Christians in China as high as 100 million.

They also come as the Communist Party has instated China's most severe crackdown on Christianity and Islam in years, according to religious rights groups including China Aid and The Uighur Human Rights Project, both based in Washington D.C.

Authorities in Zhejiang province have removed more than 1,200 crosses since the end of 2013 and demolished dozens of Catholic and Protestant churches. Recent clashes in Zhejiang — dozens have reportedly been injured trying to protect crosses — show the United Front is failing to build bridges with China's Christians, said Ying.

"These events are in violation of the conventional work of the United Front. It is difficult to understand," he said.

In Xinjiang, China's largest geographical region, Muslim Uighurs, who until recently made up most of the population, have complained that authorities have outlawed cultural and religious markers including burqas and even large beards. Beijing has maintained it is targeting a minority of Muslim separatists responsible for a recent wave of deadly bombings and stabbings in Western China.

The new rules indicate Beijing has failed to learn from key contradictions eroding religious freedoms in China, said Fenggang Yang, director of the Center on Religion and Chinese Society at Purdue University in the United States.

"Aren't Chinese Communist Party members Chinese citizens?" Yang said. "If they are, shouldn't they have a citizen's right to believe or not believe in religion? Are party members under state law or above state law?"

A survey conducted at Yang's department at Purdue University found almost 85 percent of party members followed some religious or magic beliefs and practices in 2007. It remains to be seen how the Communist Party will tackle such problems and how these new rules for the United Front will work in practice, Yang said.

"The devil is in the detail," he said. "Like in the past, there is room for local party officials to take it to the left or the right."