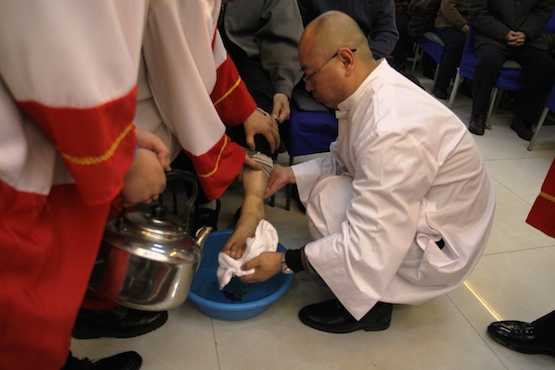 A priest washes the foot of a Catholic in China during Holy Thursday Mass last year. Some churches in China are struggling to find female participants in the ritual due to cultural norms. (Photo supplied)

When Father Thomas Liang Weiguo washed the feet of parishioners on Holy Thursday in 2014 in the Philippines, it was the first time the Chinese priest had performed the ritual on women.

Although Pope Francis began including women in the foot-washing ritual to remember Jesus' Last Supper, Chinese Catholics have been slow to embrace it.

In January, Pope Francis broke the tradition even further by instructing the Congregation for Divine Worship and the Discipline of the Sacraments to effect the changes in the rubric of the missal, allowing for the inclusion of women.

"But it is another thing in China," said Father Liang, who serves in Shanxi, home to nearly 300,000 Catholics.

"I asked my parishioners last week but most of the laywomen could not accept it [the change], especially the younger ones," Father Liang said.

In eastern Jiangsu province, where there are an estimated 220,000 Catholics, Father James Gao's parish has no intention of changing the ceremony.

His parishioners, 60 percent of whom are women, are "rather conservative," he said.

"They will feel uneasy taking off their shoes and having their feet washed by a man other than her husband or son in public," the priest said.

"After all, this is different from hand-shaking … there will be gossiping afterward," he said.

"Physical contact between men and women remains sensitive [in Chinese culture]. It takes time to accept and we need to consider the feeling among different age groups, especially the elderly," Father Liang said.

However, some clergy plan on making a bold attempt to adhere to Pope Francis' directive.

Father Zhao Hongchun of Harbin in Heilongjiang intends to pick two or three women to participate in the ceremony this year to "help laypeople adapt to the development of the church rite." The northeastern province has an estimated Catholic population of 100,000.

"The service and salvation of Jesus is for all. Women of course are included. It is a natural expression of pastoral theology," said Father Hongchun, apostolic administrator of Harbin's underground community.

"We should be more open to engaging women to let them contribute their passion, dedication, creativity and sense of mission to the church," he said.

Bishop John Wang Ruowang of Tianshui in northern Gansu province had considered including women in the past. "But this was not allowed then and I dared not break the church rule," he told ucanews.com.

Maria Wang, a laywoman in Tianshui, said she would likely raise her hand if Bishop Wang is looking for participants.

"Every year when I saw the men participate in the foot-washing rite, I wondered in my mind why women were excluded. I longed to be one of them to receive this grace," she told ucanews.com.

"I don't think there is any embarrassment because the foot-washing takes place in a holy rite. I feel the priest is representing Jesus coming into my life," she said.