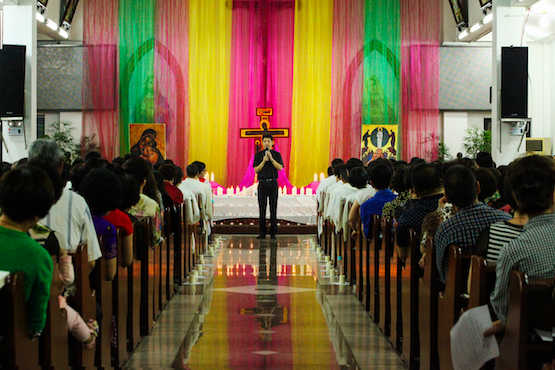 A prayer gathering in Wenzhou diocese. Recently, more faith communities are turning to the internet to celebrate their faith outside the reach of Chinese authorities.  (Photo supplied)

The highest echelon of Chinese government officials attended a national conference on religious work held in Beijing on April 22-23.

A workshop on cyber security and information technology had convened one day earlier. Chinese President Xi Jinping addressed both meetings.

Xi placed high importance on regulating religious affairs and cyberspace, saying the path of Sinicization was through making things more Chinese and that includes both religion and the internet.

An article by Shanghai Dianji University professor Zhao Bing in the academic journal "Online Communication" in February 2015, coined the phrase, "cyberreligion," as faith communities turned to the internet to celebrate their faith outside the reach of Chinese authorities.

Zhao said the nature and characteristic of "cyberreligion" is the same as "real religion" — both are evangelical in nature but only in different spatial dimensions.

Religious activities on the web have grown in recent years. Behind the thriving phenomenon of internet-based faith communities, the frustrations and injustices faced in the religious sector in China is revealed.

The emergence of the internet opens a window to religion to develop by launching religious activities that were once impossible in the real world. Catholics can read the daily Gospel or post church news on social media and listen to homilies through voice messages in their chat groups.

In real world China, religion does not have the same freedoms. Chinese media has called for "desensitizing religion" for many years, but only in words. Under the government's control, the media can only show the public one facet of a religion, while its diversity and universality could not be made known to the people.

The development of the internet provides space for religious organizations and the faithful to express themselves freely. As the number of internet users increases, their voices draw more attention.

Xi's promulgation of Sinicization clears the way for stricter government control of religion under disguise. The Chinese Communist Party is always contradicting in its own policies. One can always observe this phenomenon from past remarks by party leaders: the more the party talks openly about civil liberty, the more it seeks to monitor and control activities behind the scenes.

Sinicization was a key word in Xi's speech at the religious works conference. It means religion must embrace the Chinese characteristics of socialism and uphold the party's primacy.

His aim is to eliminate the influence of religion in China, rather than offer an opportunity for religion to freely develop. One can anticipate an eventual stricter control on ideology, with ultimate goal being to promote atheism while eliminating theism.

Hence, one should not expect too much from Xi's participation at the religious work and the cybersecurity conferences. In a society that one could not express his or her opinions freely, how would the window suddenly be thrown open to let its people see the world outside?