Some 100,000 prospective patients could lose opportunity for eye care due to Australia scaling back its foreign aid budget 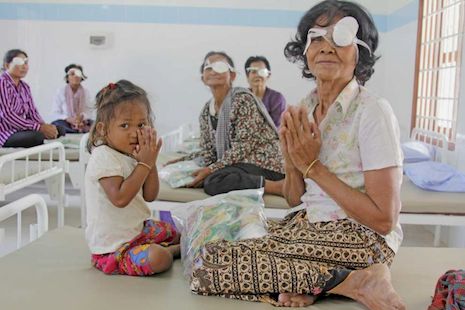 Share this article :
For 31 years, Mom Mean lived with visual impairment from the cataracts he was born with, but coming from a poor rural background in the south of Cambodia, he could not afford to have them surgically treated, and they worsened over time. By the time he finally underwent the 20-minute procedure two years ago in his native Prey Veng province, it was too late for him to be fully cured, but not for his son, then aged six, who was born with the same condition. Driven by the memories of schoolyard taunts, Mean set out to find a solution. “I did not want the same thing that happened to me to happen to my son,” Mean said yesterday. “He can see things clearly now. For me, I can say it’s better than before but not 100 percent clear.” The operations were facilitated by the Fred Hollows Foundation, an Australian NGO focused on overcoming blindness in the developing world that Mean discovered through one of the organizations community outreach sessions. However, its work is under threat from US$11 billion in cuts to Australia’s foreign aid budget, even as Australia pours an additional A$40 million (US$31 million) into Cambodia as part of a controversial  refugee agreement. With more than two thirds of its funding coming from the Australian government, the Fred Hollows Foundation is likely to face some stark days ahead. As well as offering education and treatment to impoverished communities, the organization trains ophthalmologists, nurses and community health workers, and provides facilities and equipment needed to combat cataracts and other types of curable blindness, such as amblyopia — better known as lazy eye. The cutbacks are due to be implemented over the next four years, and how heavy they will be this year remains unclear until the announcement of Australia’s federal budget in mid-May. But according to the NGO’s Cambodia country manager Sith Sam Ath, previous cuts in Australian funding have already forced a scaling back of programs elsewhere in Asia and Africa, thereby jeopardizing the organization’s commitment to eliminate cataracts in Cambodia by 2020. “I think it makes it very difficult, and maybe not possible to achieve,” he said Monday. Cataracts currently affect more than 145,000 people in Cambodia, and Sam Ath is keen to highlight the underreported health and psychological problems that commonly accompany the condition, as well as the financial strain placed on family members forced to care for blinded relatives. The Fred Hollows Foundation performed almost 9,000 cataract operations in Cambodia last year, as well as over 100,000 screenings. But with a backlog of 80,000 patients and an annual incidence rate of 20,000 people, Sam Ath said 100,000 people stand to be affected by the funding gap, which he says the organization’s other current donors would unlikely be able to fill. It’s a situation that stands to most affect women, who make up 65 percent of the patients treated by the NGO. It is a statistic Sam Ath can’t explain but that has seen the organization enter an agreement with Cambodia’s Ministry of Women’s Affairs to educate mothers on how to teach their children proper eye care — a program now facing an uncertain future. Professor Ngy Meng, chairman of the National Program for Eye Health at the Ministry of Health, could not be reached for comment Monday, and the Australian Department of Foreign Affairs and Trade, which administers Fred Hollows’ funds, did not respond to a request for comment as of press time. But as Fred Hollows and other Australian NGOs brace themselves for the cuts, the Australian government is forging ahead with a $40 million scheme to relocate refugees from Nauru to Cambodia. When asked what he thought about Australia’s impending cuts in the face of its relocation plan, Sam Ath remained coy. “I can’t speak about that, all I can say is that many, many people will be affected by these cuts, especially in rural areas.” Additional reporting by Taing Vida Original story: Cuts put cataract mission in peril Source: The Phnom Penh Post