Shugden Buddhists stage protest, say it is 'hypocritical' for the Tibetan spiritual leader to address an interreligious gathering 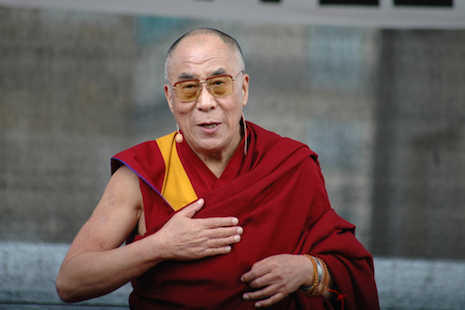 The Dalai Lama led a rare multi-faith congregation in prayers for world peace in Brisbane Cathedral on Thursday as his Australia tour again faced protests by minority Shugden Buddhists accusing the Tibetan spiritual leader of persecution.

In a reference to Saint John Paul II’s autobiography, the archbishop recalled the friendship between both men and the suffering each endured — the former pope at the hands of the Nazis and Tibet’s spiritual leader in exiled opposition to China.

“Here in the 21st century we face a number of problems that we have created and which we have to solve,” said the Dalai Lama. “And we have to employ warm-heartedness, not resorting to force, to make a peaceful world.”

Amid prayers to multiple deities spoken in languages including Chinese, Pali, Arabic and English, religious representatives called for growing trust between faiths.

“There is no doubt that the promotion of harmony, especially religious harmony, is of great significance,” said university professor and Imam Mohamad Adalla.

“The world today is in need of people like yourself,” he told the Dalai Lama, who will celebrate his 80th birthday early next month.

The Tibetan spiritual leader is halfway through a 12-day visit to Australia alongside Hollywood actor and devout Buddhist Richard Gere.

The Dalai Lama’s appearances in Australia have attracted small protests by Shugden Buddhists who accuse him of sanctioning persecution that has led to this minority being barred from many shops and hospitals run by Tibetans exiled in India. Sporadic violence has reportedly erupted between the two groups.

“From our point of view, it feels a bit hypocritical that he’s addressing a multi-faith gathering … when in his own community he’s created a huge amount of suffering,” International Shugden Community spokesman Nicholas Pitts told ucanews.com.

The division dates back to the 1990s when the Dalai Lama told Shugden Buddhists not to attend his teachings after he said the Shugden spirit is “of the dark forces”.

“It’s very easy for this to get lost in a bizarre theological debate but that’s not really what this is about,” said Pitts. “We’re talking about today, and today the Dalai Lama can solve this, and I just don’t understand why he doesn’t do it.”