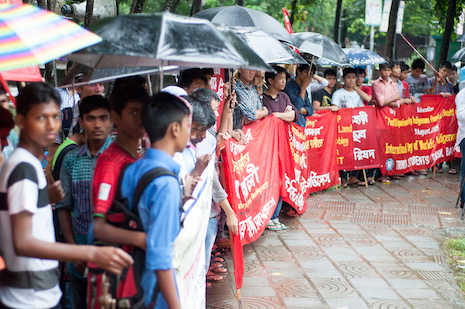 More than 200 indigenous people formed a human chain in Dhaka on July 31 to call on the government to recognize their constitutional rights.

They also demanded that the government officially recognize the International Day of the World's Indigenous Peoples, held every August 9.

"There are many international days celebrated in Bangladesh with state sponsorship and endorsement, but the government has been utterly negligent about celebrating Indigenous Peoples Day," said Sanjeeb Drong, secretary of the Bangladesh Indigenous Peoples Forum, the largest forum for ethnic minorities in the country.

"Indigenous people are routinely abused for their property and land because the state does not recognize them as equal citizens. They are evicted from their land, face violence including murder and rape, but our law and justice system can't protect them," said Drong, a Catholic.

In Bengali Muslim-majority Bangladesh, about 3 million of the country's 160 million people belong to 45 indigenous, or tribal, groups. The majority of indigenous people are Buddhists and animists. Bangladesh has about 500,000 Christians, most of whom are Catholic. About half of them hail from indigenous communities.

During the debate over a 2011 constitutional amendment, indigenous leaders called on the ruling Awami League government to insert the term “indigenous peoples” in the charter. This request was denied, but the government instead included them as "small ethnic groups."

In Bangladesh, more than 140 indigenous people were killed, more than two dozen women raped and some 10,000 forced to migrate to other countries, including India, in the past four decades, according to the Dhaka-based Kapaeeng Foundation, a human rights group for indigenous people.

However, the day was never officially celebrated in Bangladesh. Activists say the neglect to indigenous people has been deliberate and deeply rooted.

Bangladesh split from Pakistan and emerged as an independent nation due to the Bengali nationalist movement. But an ultra-nationalist attitude among political leadership and the administration has denied indigenous people in the country a constitutional recognition of their rights, said Mesbah Kamal, a history professor at Dhaka University.

"The nation of Bangladesh has recognized religious diversity and pluralism among Bengali people but it has constantly denied ethnic pluralism and diversity," said Kamal, head of the Research and Development Collective, a nongovernmental organization that works for the rights of ethnic and religious minorities.

"Since 1975, a rise of Islamic fundamentalism has endorsed and continued this trend as ethnic minorities are mostly non-Muslim people,” he said.

"If the government recognizes indigenous peoples constitutionally, it must guarantee their rights are protected and take initiatives to return their properties and prosecute their abusers. Without recognition, the government can shrug off all these responsibilities," he said.

Rashed Khan Menon, minister of tourism and chairman of the Bangladesh Parliamentary Caucus of Indigenous Peoples, declined a request for an interview.