As disease ravages Americas, preparations to meet in region are underway 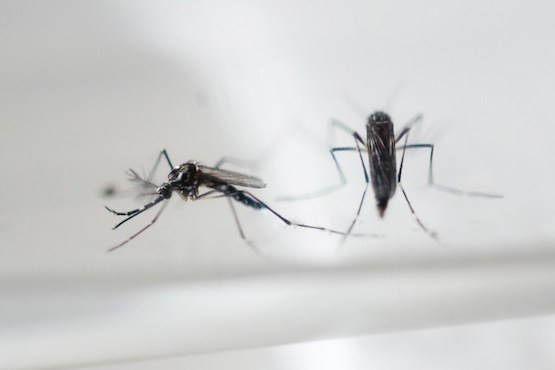 Aedes Aegypti mosquitos are photographed in a laboratory of control of epidemiological vectors in San Salvador, on Jan. 27. The mosquito is vector of the Zika virus which might cause microcephaly and Guillain-Barre syndrome. (Photo by AFP)

Health officials across Asia are bracing for a likely outbreak of the Zika virus, while church leaders have urged individuals to take precautions.

In the Philippines, which has the largest overseas labor force in the region, a Catholic bishop on Feb. 1 warned Filipinos abroad to take safeguards against the virus, which is spreading through the Americas.

"Please be cautious and aware of the danger ... don't take it for granted," Bishop Ruperto Santos of Balanga, head of the bishops' Commission on the Pastoral Care of Migrants and Itinerant People, said.

No Zika cases have been reported in the Philippines since 2012, when a 15-year old boy was infected in Cebu City.

"We should always be on guard because it's happening in other countries and it can also happen here," said Dr. Lyndon Lee Suy, spokesman for the Department of Health.

Spread by Aedes aegypti mosquitoes, the same species that spreads dengue and other highly infectious diseases, the Zika virus is expected to break out in all areas in which the mosquito is present.

Symptoms of the disease such as fever, joint pain and a rash, are usually mild, but in Brazil, the virus has been linked to thousands of cases of microcephaly in newborns — a neurological condition that can cause extreme intellectual and physical disabilities.

After a high-level meeting in India, Federal Minister for Health and Family Welfare J. P. Nadda on Jan. 29 said the government was "closely monitoring the situation and all necessary steps have been initiated to ensure India is well prepared in case of any eventuality."

A new technical group will monitor the disease and advise on necessary steps that need to be taken, the ministry said in a statement.

The government was to issue a travel alert advising pregnant women to avoid trips to the 24 countries where the virus has spread, local media reported on Jan. 30.

Beginning this week, India's international airports will ask passengers coming from South and Central America and the Caribbean to report symptoms of fever, body rash, conjunctivitis and joint and muscle pain within two weeks of travel, said a report in the Hindustan Times daily.

No outbreaks of the virus have been seen in India since the 1950s, meaning immunity is likely extremely low.

The Catholic Health Association of India, an umbrella organization of church medical care institutions and health workers in the country, said they are aware of the potential danger the virus could create in India and were monitoring the situation.

In neighboring Bangladesh, health officials urged calm noting that travel between the affected nations was rare.

"Zika is prevalent in Central and South American countries, which are very far away and we have less movement of people to and from those affected countries," said Professor Mahmudur Rahman, director of the state-run Institute of Epidemiology Disease Control and Research in Dhaka.

But, he noted, "Any country could become a victim of the virus, so we are alert. The government is engaged in mosquito control measures and spreading awareness about precautions against virus infection."

"The World Health Organization is yet to issue emergency guidelines for the Zika virus. Once we have them, we will take further measures," he added.

Dr. Edward Pallab Rozario, secretary of the Catholic bishops' Healthcare Commission, said they "have passed on information about the Zika virus and awareness guidelines to Christian health workers. They are taking precautionary measures against possible infections."

"Many pregnant women in rural areas come to our facilities for childbirth. We have been advising them to wear long clothes, use mosquito nets and be wary in the morning and evening when Aedes mosquitoes feed," he added.

Similar measures have been taken in Pakistan, where Father Robin Bashir, director of the Bethania Hospital in Lahore, said doctors were discussing sanitation and hygiene protection measures.

The Health Ministry issued a statement Jan 30 saying it is "monitoring the situation."

"Pakistani officials are fully aware of the threat the virus is posing globally. We are providing information to avoid unnecessary fear and misunderstandings among the public.

"There is not a single case of Zika in Pakistan, nor is there any threat of a virus outbreak," a ministry spokesman said.

In Malaysia, the Health Ministry said the country is highly vulnerable to an outbreak. In a Jan 29 press statement, Deputy Health Director Dr. Lokman Halim Sulaiman told local media that Malaysians are at high risk because they have no immunity to the Zika virus, making it likely the disease could spread very quickly if it makes its way to the region.

He warned that it would be extremely difficult to stop the spread of the virus to Malaysia because there was also no quick "point of care test" available.

Health authorities have urged all those who visited infected areas especially in South and Central America and who had taken ill to report to a quarantine center or the nearest health department.

In Indonesia, the Health Ministry called on locals to take an active stance in combating the spread of the virus by tackling mosquito breeding grounds.

"We call on the society to make the 'the 3M Movement' a habit," Health Minister Dr. Nila Djuwita F. Moeloek said in a Jan. 31 statement.

In late January, the Eijkman Institute for Molecular Biology announced that one case of Zika had been found on Sumatra Island and that they believed the virus had been circulating in Indonesia.

The country has already started screening visitors from Latin American and African countries at the airport to stop the potential spread of Zika.

They warn that travelers should take the basic precautions to protect themselves from mosquito bites.

Dr. Paba Palihawadana, the director of the Central Epidemiological Unit of the Ministry of Health said that the country had a low probability of Zika since there was very low number of tourists arriving from Latin American and African countries to Sri Lanka.

Hong Kong Secretary for Food and Health Dr. Ko Wing-man, said officials will meet this week to discuss a mosquito control campaign, while the Chinese Center for Disease Control and Prevention expects few cases given the cold weather, according to state media.