In another leap backwards, China jails its lawyers 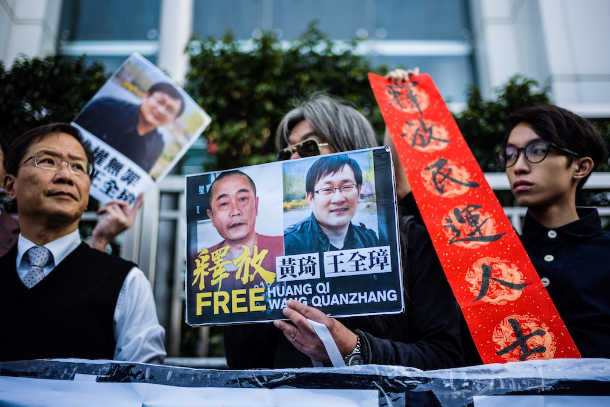 Hong Kong pro-democracy activists attend a protest in support of jailed Chinese human rights lawyer Wang Quanzhang (pictured right on placard) and China's first "cyber-dissident" and founder of human rights website "64 Tianwang", Huang Qi (pictured left on placard), outside the Chinese Liaison Office in Hong Kong on Jan. 29. Wang was sentenced on Jan. 28 to four and a half years in prison for state subversion. (Photo by Anthony Wallace/AFP)

Barely a week goes by without China’s human rights record being thrust into the international spotlight. Uyghurs in concentration camps, Canadians bullied over the Huawei affair, free speech advocates and religious leaders, are all feeling the politburo’s nasty pinch.

Even lawyers, the last line of defense, have not been spared.

This week China jailed Wang Quanzhang for four-and-a-half years and deprived him of his political rights for five years after a court in Tianjin found him of guilty state subversion, the final conviction in the "709" crackdown, so called because it began on July 9, in 2015.

Wang, 42, from the Beijing Fengrui law firm was denied his own choice of lawyer. Diplomats, journalists and other independent observers were barred from his trial.

No sooner had Wang’s sentence been announced that the world learned Chinese-born Australian writer Yang Hengjun had been detained in Beijing on suspicion of espionage. It was a double whammy for academics, writers and activists associated with China.

As the Sydney Morning Herald noted about Yang's case: “That someone so experienced in handling the vicissitudes of the party state could fall victim to its machinations points to just how perilous China’s politics have become.”

This and Wang’s sentencing underscores an emerging trend; “human rights with Chinese characteristics,” has been honed under Xi Jinping ever since he grabbed absolute power almost three years ago.

Since then his leadership has showed a stunning disregard for international laws by snatching and detaining Meng Hongwei, the former Interpol president, as part of an anti-graft campaign which is now widely viewed as ploy to rid Xi and his coterie of their critics.

According Wang’s family, he too ‘simply vanished’ in early August 2015 and was not heard of until Beijing announced the results of his one-day trial, conducted behind closed doors on Dec. 26.

“In the three years leading up to his sham of a trial, the authorities disappeared Wang Quanzhang into a black hole, where he was likely tortured,” said Doriane Lau of Amnesty International. “Wang’s family, who continue to be harassed by the authorities, didn’t even know if he was alive.” Li Wenzu poses for the media before shaving her head to protest the detention of her husband and Chinese human rights lawyer Wang Quanzhang, detained during the 709 crackdown, in Beijing on Dec.17, 2018. (Photo by Fred Dufour/AFP)

A total of 248 lawyers and human rights activists were arrested in the 709 sweep. They had built reputations by defending clients in trouble with China’s state security apparatus, including Falun Gong practitioners, victims of land grabbing and political advocates.

Those lawyers were bright and loyal to the Chinese constitution, using the letter of the law to hold the unscrupulous accountable regardless of where their political loyalties lay. Some of these lawyers have been jailed or placed under house arrest while others were freed but their legal work ceased.

Among them were Wang Yu. She specialized in sensitive cases, defending the Uyghur scholar Ilham Tohti and rights activist Cao Shunli who died in prison after being denied medical help. She was reportedly tortured and held in secret detention before release. She keeps a low profile.

Another was Li Heping who defended Christians and Falun Gong practitioners. His attorneys were told by officials that he had dismissed them, but that was never verified personally, and he was convicted of “subverting state power” and jailed for three years.

And there is Zhou Wei, the former journalism student who became a legal assistant at the Beijing Global Law Firm, who was charged with “subverting state power.” She was reportedly released but has not been heard of in more than two years.

Li Baiguang, a lawyer noted for his defense of farmers and fellow Christians, died suddenly in custody early last year. Officials said he suffered liver disease, a condition he never mentioned to friends, although he was beaten by police.

These lawyers worked and had normal lives under previous Chinese administrations. Li, in fact, thrived. In 2006, he met and openly discussed his work with U.S. President George W. Bush. He was also a prominent go-between for foreign reporters and the authorities during the 2008 Olympics. Back to the future

The 709 sweep has made a mockery of China’s judicial system.

Even among like-minded governments — where the judiciary is seen as compliant to the executive — lawyers who represent the aggrieved are rarely prosecuted. They are at least seen as part of a system that legitimizes authoritarian rule, and sometimes the innocent are found not guilty.

But in the People’s Republic guilt is presumed and innocence is out of the question.

Under Xi, China has returned to a dark era of absolute dictatorship with policy shaped by the same Marxist-Leninism ideology that drove it into the backwaters for much of the 20th century, a doctrine that is now openly pushed by Xi himself.

The incarceration and oppression of lawyers is sadly just another step in that direction.

Luke Hunt is an opinion writer for ucanews.com. Twitter: @lukeanthonyhunt