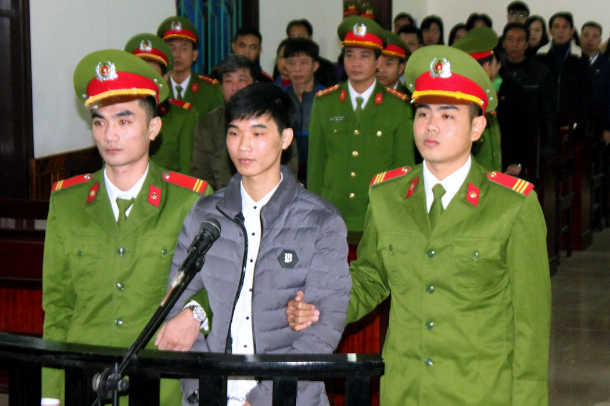 Nguyen Van Hoa stands trial at a local people's court in the central province of Ha Tinh on Nov. 27, 2017. He was jailed for seven years for disseminating anti-state propaganda including articles which supported protests against a Taiwanese firm responsible for a toxic leak. Hoa, 22, an environmental activist, was accused of instigating protests against authorities via his Facebook account, mainly following the 2016 toxic leak at a steel factory operated by Taiwan's Formosa. (Photo by Vietnam News Agency/AFP)

A jailed Vietnamese blogger who disappeared two weeks ago is now believed to be held in solitary confinement in a prison camp.

Imprisoned blogger Nguyen Van Hoa was separated from other inmates in An Diem Prison Camp in Vietnam’s southern-central province of Quang Nam, said his older sister Nguyen Thi Hue, who visited him May 28.

She said during the two weeks that Hoa was disappeared his legs were placed in stocks for 10 days.

“Hoa is now being kept alone in a cell of the K1 camp at the prison and he is being closely watched by cameras,” Hue said.

She said her brother will be held in solitary confinement for the next six months. His family visits and food supplies will also be restricted, she said.

Well-known blogger Pham Doan Trang said Hoa was initially beaten and then disappeared on May 12. This occurred after he accused prison officials of denying him access to letters sent by his family and for refusing to sign a document prepared by officials. Trang said officials were also unhappy about Hoa complaining about prison conditions and for telling government authorities that police tortured him in his home province of Ha Tinh.

As a result, Trang said, Hoa was accused of being "headstrong" and not obeying prison rules.

The 24-year-old blogger was sentenced to seven years in jail followed by three years’ probation for disseminating anti-state propaganda in 2017. Activists Vo Hong Ly and Nguyen Thuy Hanh pictured on May 28 when they were on a hunger strike demanding information about Nguyen Van Hoa's imprisonment. (Photo supplied)

Trang said other prisoners of conscience were still on their hunger strike supporting Hoa because they were unaware of his situation.

Activists across the country have joined the prisoners in a hunger strike that sought information on Hoa’s situation in the prison.

Hoa’s sister said that he thanked everyone for their prayers and support and she quoted her younger brother saying that “it is important that people should speak for us in jails so that we can have spiritual strength to overcome current difficulties.”

On May 24, Pham Thi Van, who is the mother of one of Hoa’s fellow inmates, Hoang Duc Binh, called for European Union and international human rights organizations to save her son and other prisoners of conscience.

Van said the lives of Binh and other prisoners who opposed Hoa’s disappearance are in danger because of their hunger strike, which began May 12.