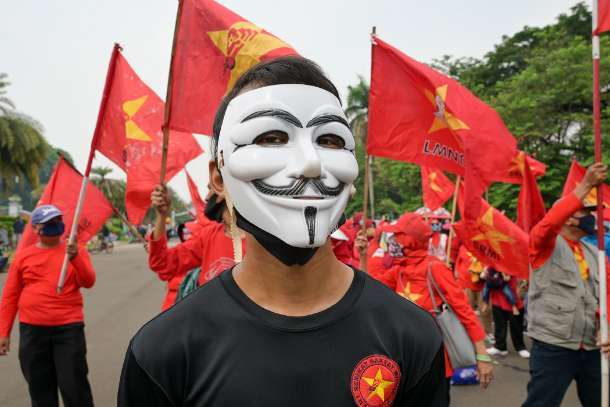 People ignore social distancing rules to curb Covid-19 in Indonesia by taking part in a rally against a controversial new law which critics fear will favor investors at the expense of labor rights and the environment, in Jakarta on Oct. 16, 2020. (Photo: Bay Ismoyo/AFP)

Hopes for a speedy recovery from the Covid-19 pandemic may have been dashed again, snatched away by many people who believe the virus does not exist, or are convinced they will never be infected.

This is despite the government having implemented extensive health responses and some of the best economic stimulus packages to help affected people and businesses.

However, a survey by the Central Statistics Agency published at the end of September suggested the misery will continue.

The survey, called Community Behavior During the Covid-19 Pandemic, revealed that 17 percent of the nearly 10,000 respondents, equivalent to 44.9 million of the 270 million population thought Covid-19 was not a major concern.

So many people underestimating the virus and subsequently disregarding health protocols is potentially catastrophic and can explain why the number of new cases has continued to rise.

On Oct.15, Indonesia overtook the Philippines as Southeast Asia’s leader in terms of new Covid-19 cases.

Today, the virus has killed more than 12,600 people in Indonesia, the third-highest death toll in Asia, after India and Iran.

But why do Indonesians not believe the virus is real, despite it having infected over 40.6 million people worldwide?

According to Suhariyanto, the head of the Central Statistics Agency, this failure to recognize the danger is linked to their level of education. People with a poorer education level are more likely to think they will not be infected.

Indonesian education is of a poor standard for many reasons: a lack of quality teachers, infrastructure, budget, and a low level of awareness on the importance of education particularly in remote areas. While the level of people’s education plays an important part, there is something else at work, which is the politicization of Covid-19 worsened by social media.

People’s attitudes towards the deadly virus has been influenced by disinformation, hoaxes or false news circulating around the world and the early response to the pandemic from the Indonesian government.

With 64 percent, or about 175 million, Indonesians connected to the internet, according to social media management platform Hootsuite, the use of social media as a primary source of information on the virus, particularly among youths, is inevitable.

Meanwhile, US President Donald Trump’s claim that Covid-19 was purely a Chinese conspiracy was repeatedly broadcast on social media and many Indonesians accepted it as truth. It shaped their view that the virus is not as dangerous, despite what the government was telling them.

Early claims by Indonesian officials before the first cases were detected in March that the virus would not survive in Indonesia also played a part in shaping people’s attitudes towards the pandemic.

Government flip-flopping on dealing with Covid-19 in the early days and months failed to show many people that the virus was dangerous.

Another error was the government's decision to proceed with regional elections in December, which sent the message that politics was more important than people’s health.

This was further exacerbated by recent comments by Moeldoko, the presidential chief of staff and the Central Java governor, Ganjar Pranowo, accusing hospitals of deliberately diagnosing patients with Covid-19 to get money from the government.

The Indonesian Hospital Association hit back by calling the accusations baseless, adding that they would erode public trust in hospitals and medical workers.

Such comments were ridiculous, unnecessary, and undermined efforts to combat the virus as they sent a message to the public that Covid-19 had been commercialized.  It meant people became more indifferent to health protocols such as social distancing because they considered Covid-19 was a money-making machine for medical workers and hospitals, so why should they bother.

Government officials need to realize that poor communication skills are often misinterpreted by the public, which in this case undermines overall efforts to fight the pandemic.

It means a bigger challenge for the government, particularly the Covid-19 Task Force, and the majority of Indonesians who have been following health protocols in the hope that the pandemic will end soon.

If these people don’t change their attitude towards Covid-19, such as those who attended recent mass protests against a controversial job creation law, and continue to ignore health rules, Indonesia will never rid itself of the pandemic.