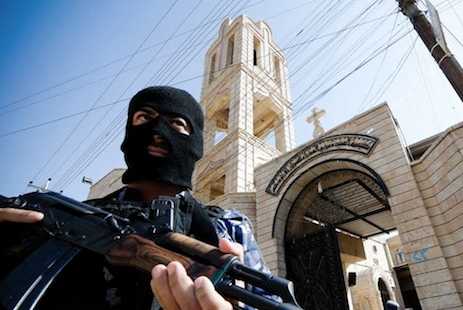 An Iraqi security officer stands guard outside the Church of the Virgin Mary in the northern town of Bartala, east of Mosul in 2012 (AFP Photo/Karim Sahib)

By Jason Jones and John Zmirak for Aleteia

“For the first time in 1,600 years there was no Mass in Mosul last Sunday,” reports Chaldean Archbishop Bashar Warda. An Iraqi city which once was a major center of Christian life is now almost devoid of the sacraments, and its thousands of resident Christians are fleeing Sunni radicals’ reign of religious terror.

If the occupation continues, at some point the last church will close, and the last consecrated host will be consumed -- at which point the city will be in one sense devoid of Christ. Think about that for a moment

Imagine your own city or town, and visualize what it would mean for every church and chapel to close, and the bishop to put the last ciborium in the trunk of his car and drive away. Would the city feel any different to you? Would its shambling life recall a zombie, a body without a soul?

Now think of the cities of Germany after Kristallnacht, where not a single synagogue could be seen whose windows had not been smashed, which had not been gutted by fires of sacred books. Think of those cities in Poland, in Russia, in Greece, where Jews had lived for hundreds or thousands of years -- where empty temples and abandoned graveyards now are the only traces left of those cousins of Christ. Walker Percy wrote in The Thanatos Syndrome that the fathomless, seemingly senseless hatred of Nazis for Jews had a real and comprehensible motive: the desire to make mankind a god, and the need to erase every concrete sign of the real God and of His people.

Ours has been a bleak and bloody century, and if we do not learn its lessons, we will reenact all its crimes.

But the hundred years since 1914 have not been uniquely evil. If we look back at the massacres of previous centuries, we might begin to see the explosion of racist violence in the 20th century less as a hideous innovation than as the resurgence of a profoundly human temptation. Our dark impulse to exclude and victimize the Other can only be kept at bay by consciously cultivating a sense of our common humanity.