William Grimm, a native of New York City, is a missioner and presbyter who since 1973 has served in Japan, Hong Kong and Cambodia.
If it happens on your watch
Published: November 08, 2021 09:53 AM 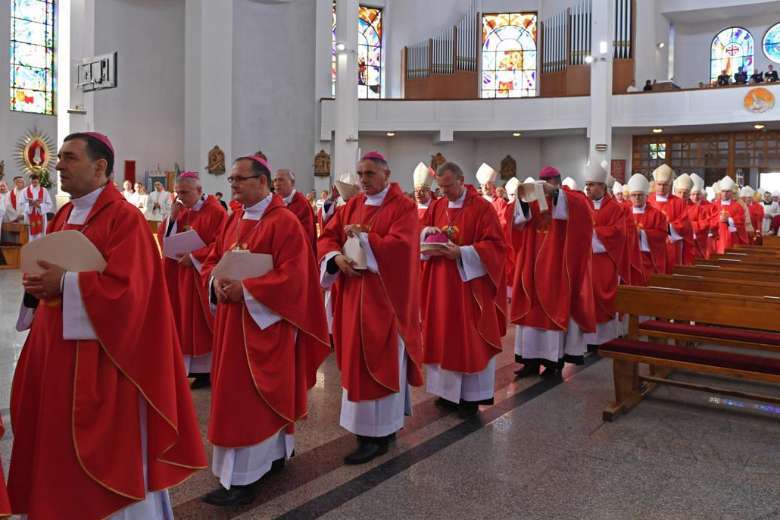 Polish bishops attend a special Mass on the sidelines of a meeting on child sex abuse scandals in Walbrzych in June 2019. (Photo: AFP)

I check several news sources each morning at the start of my day. That practice sometimes leads to interesting juxtapositions, as on the recent morning that I read about Polish bishops who during their ad limina visits to Rome complained that sanctions on bishops who have mishandled cases of clerical sexual abuse have been too severe.

Their complaint was that removal from office and, presumably in their eyes, “demotion” to pastoral ministry is unjustly harsh.

The head of the Polish bishops’ conference was quoted as having said in a mid-October interview that “a bishop who had shown tolerance towards a cleric guilty of abusing a minor is punished more harshly than the culprit.”

He did not seem to think that perhaps that means the punishment of abusing clerics might be too lenient. Neither did he seem to realize that “tolerance” towards an abuser is abetting a crime.

While one cardinal and eight bishops in Poland have so far been subject to sanctions, only three of them were removed from their ministry because the rest were already retired.

After reading that report, I read another about an American nuclear-powered attack submarine that collided with an undersea mountain. The seamount did not appear on any charts. The report said that the two senior officers of the USS Connecticut and a senior enlisted crew member were removed from their positions. There were no further details about the reasons for their demotion.

However, the sanctions were surely not unexpected by the officers because one of the principles of military command is that “if it happens on your watch” you are responsible whether you foresaw a problem or not. It is your duty to foresee danger and so anything that goes wrong when you are in charge is your responsibility.

Sometimes that may be obviously unfair, but one knows that possibility when accepting the responsibilities and rewards of command.

I assume that the Polish military follows the same protocol and the bishops of that country would do well to become familiar with it. Perhaps military chaplains can explain it to them.

Clearly the Polish bishops do not agree that something that happens on their watch, even so far as their personally abetting a crime, merits the ecclesiastical equivalent of the punishment meted out to the commanders of a submarine that bumps into an uncharted invisible mountain.

Of course, that attitude is not limited to the bishops of any one country. It is common among their ranks in many countries.

The word “bishop” literally means “overseer.” In other words, the definition of a bishop’s duty is his responsibility to be “on watch.”

Suddenly and uncomfortably, bishops in Poland and the rest of the world are finally being taught what it means to have something happen on their watch.

They are, one hopes, learning that being an overseer in the Church means more than simply the chance to wear fantastic fashions and a funny hat while accepting adulation and deference from the declining number of people willing to offer them.

The whining bishops are learning that delay, dawdling, deferring, cover-ups, selective blindness, avoidance and “tolerance” in dealing with abuse will no longer be overlooked by the headquarters in Rome.

Pope Francis in May 2019 issued an instruction, Vos Estis Lux Mundi, that in Vatican-speak basically says, “if it happens on your watch.”

“Even when making use of other persons, the metropolitan nevertheless remains responsible for the direction and conduct of the investigation, as well as for the timely execution of the instructions” given by Rome within 30 days of a case being reported. (A “metropolitan” is an archbishop overseer of other bishops in the area.)

Bishops in Poland and elsewhere are now finding out what happens to those who fail on their watch. They are removed

In other words, the overseers not just in Poland but around the world have been put on notice that they must do all that overseeing entails and do it without delay.

But it does not end there. Bishops in Poland and elsewhere are now finding out what happens to those who fail on their watch. They are removed.

That is as it should be. It is scandalous that such has not been the case in the past. Had it been so, the recent history and the apparent near future of the Catholic Church might have been very different.

All over the world, bishops have been untrustworthy, so now they must face the consequences of their inaction and action, their sins of omission and commission. Until the bishops as a class learn to be true to their job, that risk must be enforced with rigor, at least as much rigor as militaries use to enforce their expectations.

Some of that responsibility for enforcement lies with the rest of us. We cannot trust that overseers in Rome will always be good watchers. To do so would mean ignoring history, current events and common sense. We must all keep an eye on the watchers.

Bishops are being forced to accept the consequences of taking the job of overseer. It is poetic justice because so many bishops spent their careers as priests angling for promotion to command status. Now they must do the job because they shall be held responsible for what happens on their watch.

DESMOND COUTINHO
No Bishop has ever been censored in India. If they rape here all the great and the good rush to their defence. If they whined like the Polish Bishops that would be progress for the Indian Church
Reply

LYNN THOMAS
It is a nice article, and thank you William Grimm for the clarity of thought that you have brought in. It is indeed true that bishops also have the same responsibilities and duties like ministers and government officials. If ministers and officers in countries can be sacked and removed for negligence of duty, so can the bishops be also removed for neglecting and hiding sexual abuse cases in the Church. Please continue to publish such path-breaking columns in UCA News so that the Church's mission led by Pope Francis gets into new pastoral grounds. Best wishes
Reply