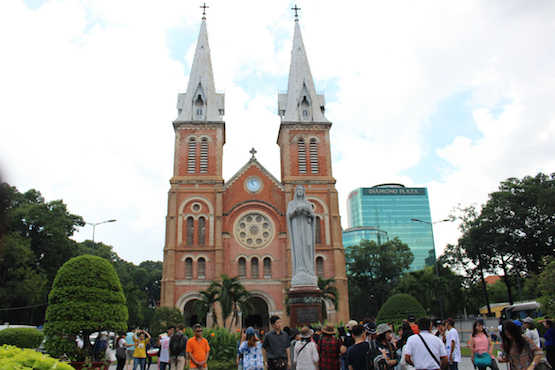 Tourists gather in the Queen of Peace Square in front of Notre Dame Cathedral in Ho Chi Minh City on July 6. (ucanews.com photo)

The Archbishop's House received the necessary building permits on June 30 and workers started erecting barriers around the 137-year-old cathedral on July 4.

The archdiocese's Board of Cathedral Restoration said the cathedral's roof and two bell towers are the main areas that will be restored.

An estimated 123,800 new tiles — imported from France and Germany — will be put on the roof while new material for the two 60.5-meter-high towers will also be imported from abroad.

The Roman-and-Gothic building with a capacity of 1,200 seats was built in 1880 by French missionaries. Initial building materials were imported from France.

Father Ignatius Ho Van Xuan, head of the restoration board, said in a report issued in March that the work is expected to take three years to complete.

He said the project is estimated to cost 100 billion dong (US$4,405,000). All funds for the restoration work comes from local Catholics.

While the restoration is being carried out, regular services remain unchanged but tours of the cathedral have been put on hold due to safety concerns.

The church was installed as Immaculate Conception Cathedral Basilica in 1959. It is one of the top 10 most popular destinations of Ho Chi Minh City, formerly known as Saigon.