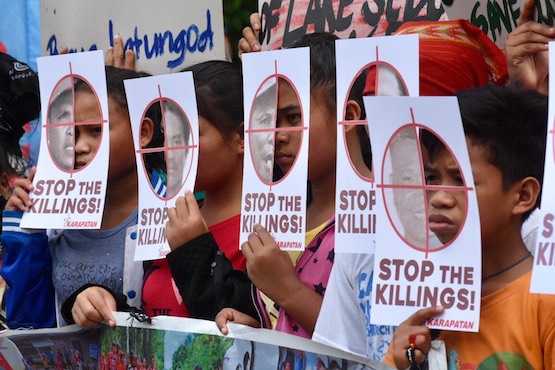 Activists hold a demonstration in Manila to protest drug killings in the Philippines. (Photo by Angie de Silva)

The International Criminal Court (ICC) is to conduct a "preliminary examination" into killings in the Philippines linked to the government's "war on drugs."

Human rights groups have reportedly compiled evidence in the past 19 months of police involvement in the killings.

Duterte said he was ready to face trial, and even dared the court to sentence him to death should he be found guilty of violating international laws.

"I welcome you and if you want to find me guilty, so be it. Find a country where they kill people with a firing squad. And I'm ready," said the president.

"If you haul me into a rigmarole of trial and trial, no need. Go ahead and proceed in your investigation. Find me guilty, of course, you can do that. I do not want imprisonment," he said.

Presidential spokesman, lawyer Harry Roque, expressed confidence that the investigation would not go beyond the preliminary examination into the "baseless" allegations.

Roque said the investigation would just be a "waste of the court's time and resources."

Several Catholic bishops welcomed the court decision, with one prelate saying that crimes allegedly committed by Duterte before he became president should also be included in the investigation.

Duterte's has been accused of involvement in summary executions when he was Davao City mayor.

Bishop Arturo Bastes of Sorsogon said "it is time that the [international court] should officially investigate these crimes against humanity."

Manila Auxiliary Bishop Broderick Pabillo said the court should pursue the investigation so that all those responsible for the killings would be held accountable.

"I hope the [International Criminal Court] will pursue the case so that people should know nobody can do things with impunity," said the prelate.

"All will be held accountable for anything that they do especially those in power. The more power the more accountability," added Bishop Pabillo.

Child rights group Salinlahi Alliance for Children's Concerns also welcome the investigation, saying that the families of children who died are crying for justice.

"Children's lives under Duterte is always in danger," said Eule Rico Bonganay, secretary-general of the group.

A preliminary examination by the ICC is not a full-blown on-the-ground investigation, but a first step to determine a possible basis for a formal investigation.

Bensouda, a Gambian lawyer, said the ICC reached its decision following a "careful, independent, and impartial review of a number of communication and reports."

The court's action came after Senator Antonio Trillanes and lawyer Jude Sabio filed a communication before the court last year accusing Duterte of masterminding the killings of drug suspects.

Philippine Justice Secretary Vitaliano Aguirre expressed confidence that the accusations against Duterte "will not fly."

Established in 1998 under the Rome Statute, the ICC is a "court of last resort" that aims to hold those responsible accountable for crimes concerning the international community such as genocide, war crimes, and crimes against humanity.