Philippine President Rodrigo Duterte speaks during the annual state of the nation address at the House of Representatives in Manila, on July 26. (Photo: AFP)

The International Criminal Court has suspended its investigation into suspected rights abuses committed under Philippine President Rodrigo Duterte's "war on drugs" following a request from Manila.

The Hague-based court in September authorised a probe of the campaign that has left thousands of people dead, saying it resembled an illegitimate and systematic attack on civilians.

Duterte was elected in 2016 on a campaign promise to get rid of the Philippines' drug problem, openly ordering police to kill drug suspects if officers' lives were in danger.

At least 6,181 people have died in more than 200,000 anti-drug operations conducted since July 2016, according to the latest official data released by the Philippines.

"The prosecution has temporarily suspended its investigative activities while it assesses the scope and effect of the deferral request," ICC prosecutor Karim Khan wrote in a court notification dated November 18.

He said the prosecution would request additional information from the Philippines.

Duterte pulled Manila out of the ICC in 2019 after it launched a preliminary probe, but the court says it has jurisdiction over crimes committed while the Philippines was still a member.

After long refusing to admit the court had any power to intervene and refusing to cooperate, Duterte backtracked in October to say he would prepare his defence. 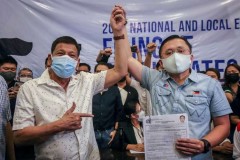 Despite its request to the ICC, Manila said it maintained that the court had no jurisdiction.

"We reiterate that it is the position of the Philippine government that the International Criminal Court has no jurisdiction over it," Duterte's spokesman Karlo Nograles said in a statement Saturday.

"In any event, we welcome the judiciousness of the new ICC prosecutor, who has deemed it fit to give the matter a fresh look and we trust that the matter will be resolved in favour of the exoneration of our government and the recognition of the vibrancy of our justice system," he said.

In his letter requesting a deferral, ambassador Malaya said the Philippine government was investigating the alleged crimes against humanity committed during the drug war.

He said the Philippine government "has undertaken, and continues to undertake, thorough investigations of all reported deaths during anti-narcotic operations in the country".

Human Rights Watch dismissed the claim that the Philippines' existing domestic mechanisms afford citizens justice as "absurd" and an attempt to stave off the ICC probe.

"Only 52 out of thousands of killings are in early stages of investigation. Despite many clear-cut cases of murder, no charges have even been filed," the rights group's Asia director Brad Adams tweeted Saturday.

"The reality is that impunity is the norm under President Duterte, which is why the ICC needs to investigate. Let's hope the ICC sees through the ruse that it is."