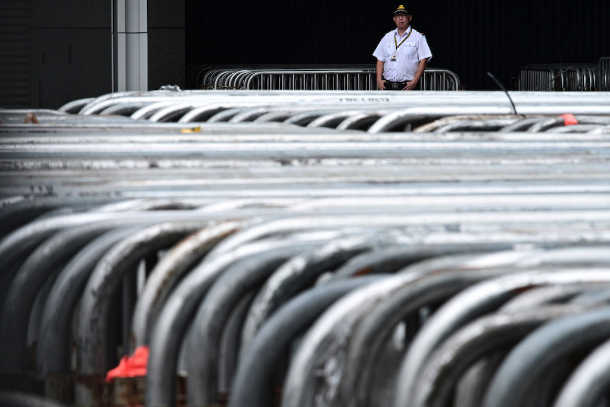 A security guard stands behind rows of barricades outside the Legislative Council in Hong Kong on July 11 after parts of the complex were reopened. A lockdown in Hong Kong's parliament was lifted 10 days after it was stormed by demonstrators, but tensions remained high with fights breaking out at protests that have cropped up across the city. (Photo by Anthony Wallace/AFP)

A group of hunger strikers in Hong Kong protesting a proposed extradition law that would allow the sending of criminal suspects to mainland China have vowed to refuse food indefinitely until the government officially withdraws the bill.

The protesters, who include members of religious groups, have been fasting since July 3 on a bridge near the main government building in the Admiralty district.

Fernando Cheung, a Labour Party lawmaker, joined them on July 10.

The protest was initiated by Protestant pastor Roy Chan, who said it aimed not only to send a message to Hong Kong authorities but also to stop young people harming themselves.

He pointed to the suicides of three young activists who killed themselves after putting up anti-extradition slogans during mass protests.

"We should let the public and young people know that there is a group of people who are willing to ruin their health and their lives in order to protest and fight," Radio Free Asia quoted Chan as saying at the start of the hunger strike.

Speaking to reporters on July 10, Chan said the fasting by at least five hunger strikers would continue until the government officially withdraws the proposed extradition bill.

His remarks came a day after embattled Hong Kong leader Carrie Lam declared the bill “dead” but stopped short of withdrawing it.

Critics accused her of being “stubborn” while other protesters like Chan have vowed to ramp up protests until their demand for the bill’s complete withdrawal are met.

They also want the authorities to release people arrested during the protests and are calling for an independent investigation into police violence against protesters.