At least 40 garment workers in a mass hunger strike in Dhaka have fallen sick as a tense standoff with factory managers entered a fourth day on Thursday with no sign of resolution.

Some of the 1,500 workers, mostly women, began to flag after they began striking on Monday at the start of Eid, the festival ending the month-long Ramadan fast.

Some were placed on saline drips but continued to refuse food or to leave the cramped office of their employer, the Tuba Group, after it failed to pay three months of wages and an Eid bonus.

“I am so sad and frustrated because the management has ruined our Eid and forced us to hunger strike. We won’t give up until our demands are met,” said Rabeya Akter, 35, a sewing machine operator.

Workers in the factory are typically paid between 10,000 taka and 12,000 taka (US$130 - $156) per month including overtime, among the lowest garment wages in the world, but have not been paid since the end of April.

“For three months, I have been in serious trouble because I have borrowed money to pay rent, food for the family and school fees for our two children. I hoped at least they would pay before Eid but they have disappointed us,” said Mohammad Mohsin, a 38-year-old sewing machine operator.

The Tuba Group has argued it is unable to pay staff what amounts to tens of thousands of dollars after its Tazreen Fashions factory was gutted in a fire that killed 112 workers in 2012.

Owner Delwar Hossain and his wife Mahmuda Akter and 11 senior managers were jailed in February for their “unpardonable negligence”. Only Akter has been allowed out on bail so far.

Babul Akhter, president of the Bangladesh Garment and Industrial Workers Federation labor organization, accused Tuba management of using the standoff to press for their release from prison so that they would then be free to settle the dispute.

“What Tuba is doing is ridiculous. Tuba’s business is going on as usual,” he said. 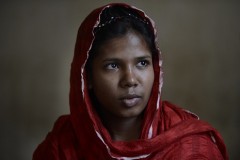 Remembering Rana Plaza, one year on

Negotiations between the management and the government had broken down, said Shahidullah Azim, vice-president of the Bangladesh Garment Manufacturers and Exporters Association (BGMEA), the industry’s main employers’ group.

“BGMEA could help to pay them, but we don’t have enough funds to do it,” he said.