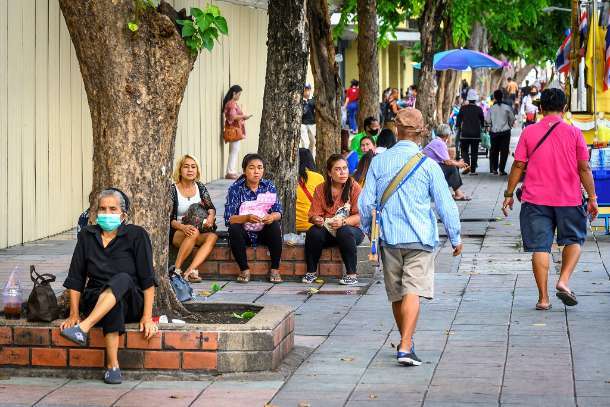 Unemployed people sit on the side of a major street in Bangkok on Sept. 15. After going for months without regular incomes, millions of locals and migrant workers have been driven to the edge of dire poverty. (Photo: AFP)

Numerous low-income earners and newly unemployed people are going hungry in Thailand as a result of a nationwide economic slump brought on by the Covid-19 pandemic.

After going for months without regular incomes or any incomes at all, millions of locals and migrant workers have been driven to the edge of dire poverty.

“I made only 120 baht [US$4] yesterday and I’ve had no customers so far today,” lamented Suchida Uttapan, a middle-aged woman who sells flower garlands on a street in central Bangkok.

“My husband is sickly and can’t work. We aren’t starving yet, but our situation is very bad.”

For many other underprivileged Thais, starvation is a looming prospect.

On the island of Phuket, a famed tourist destination that has had to do without foreign visitors for six months as a result of government measures to contain the spread of the coronavirus, numerous residents have been going hungry in recent weeks, according to media reports.

Having run out of their meager savings, the poorest residents on Phuket have resorted to government-sponsored food donations for sustenance, yet those, too, have run out of funds.

“Despite efforts to revive tourism in the area, thousands of people are still in need of donated food to survive and continue to queue up for donated food every day,” a newspaper reported.

According to a staffer at a local municipality, “there is no budget to do any more food handouts in the near future and there is no word on when or if there will be any more handouts.”

Among those without enough money are migrant workers from Myanmar who have not had any incomes almost all year as the hotels, restaurants and other tourism-related businesses where they worked have closed. Every day these migrant workers form long queues at a popular resort town on the island in the hope of receiving handouts from better-off locals, including expatriates.

“Such private donations are a result of charity events that are being held across the island with the assistance of dedicated volunteers,” a newspaper reported.

And the economic woes of many people in Thailand are set to continue at least until the end of the year as the country’s borders remain closed to mass tourism.

The economy has contracted sharply this year with key sectors such as exports, manufacturing, tourism and services all impacted.

As of August, the ratio of business closures had increased by nearly 40 percent year on year, according to the Economic Intelligence Centre (EIC), a think tank of Siam Commercial Bank.

By Aug. 18 as many as 13,400 businesses were known to have closed and many more businesses are expected to go bankrupt in the coming months, according to the EIC.