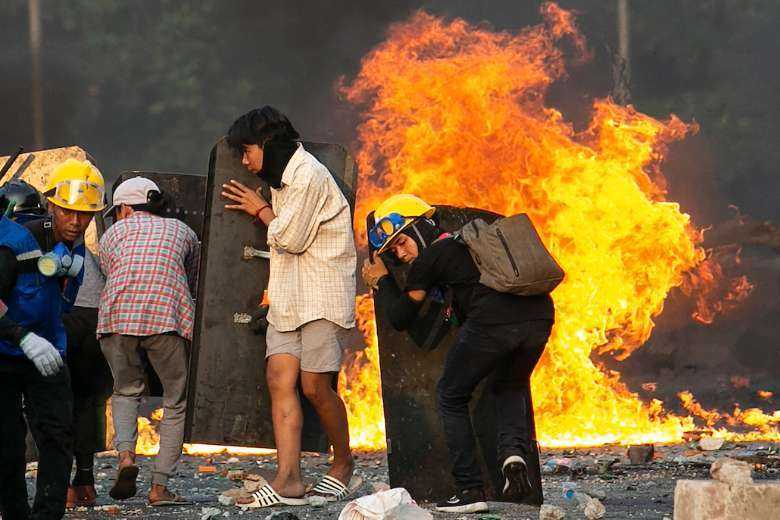 Protesters take cover behind homemade shields as they confront the police during a crackdown on demonstrations against the military coup in Yangon on March 16. (Photo: AFP)

Nearly 200 civilians, mostly Catholics, have been forced to flee their villages due to renewed fighting between the military and the Kachin Independence Army (KIA) in Myanmar’s conflict-stricken Kachin state.

The elderly, women and children were among the fleeing Kachin civilians in four villages in Injangyang township where fighting broke out on March 15.

People took temporary refuge at Our Lady, Queen of Heaven Church in Tang Hpre village where the parish priest took them after they had slept outside on March 15 night.

Father Stephan Supma Sut Awng said the military didn’t allow the civilians to go to an internally displaced person (IDP) camp on March 16 morning, so they had to stay in the church compound until the evening.

After negotiations between community leaders and military officials, they were allowed to go to the IDP camp.

“Tensions remain high, so staying in the camp is better for their safety. I don’t think they can go back to their villages in the present situation,” Father Sut Awng told UCA News.

Gum Awng, assistant leader at the Catholic Church-run Pa La Na camp in Myitkyina, the capital of Kachin state, said most of the fleeing civilians were from the camp but had returned to their villages to do farming work. Around 30 people were newly displaced, he said.

The renewed fighting in Kachin ended a truce between the military and KIA that started in December 2018.

A shelling on March 11 in Kamaing township reportedly injured four people including two children, according to the United Nations on March 16.

Local media reported that the KIA ambushed military-controlled areas last week, prompting the military to use fighter jets to attack the group.

More than 100,000 people have taken shelter at IDP camps in Kachin and Shan states since June 2011.

Most of Kachin’s 1.7 million people are Christians, including about 116,000 Catholics.

While the military is fighting ethnic groups in Kachin and Karen states, it is also conducting a brutal crackdown against unarmed protesters in urban areas including Yangon and Mandalay following the Feb. 1 coup.

At least 149 people have been killed, with at least 11 killed on March 15 and 57 over last weekend according to the UN on March 16.

It said arrests and detentions were continuing throughout the country, with more than 2,084 people remaining arbitrarily detained.

At least five deaths in custody have occurred in recent weeks, with at least two victims’ bodies showing signs of “severe physical abuse indicating that they were tortured,” according to the UN.

Myanmar has been in turmoil since the military seized power and toppled the elected civilian National League for Democracy government and detained leaders including Aung San Suu Kyi.

Mobile data has been cut off since 1am on March 15 after Sunday’s bloodshed in Hlaingtharyar, an industrial area on Yangon’s outskirts, when more than 60 protesters were killed and 300 injured, according to media reports.