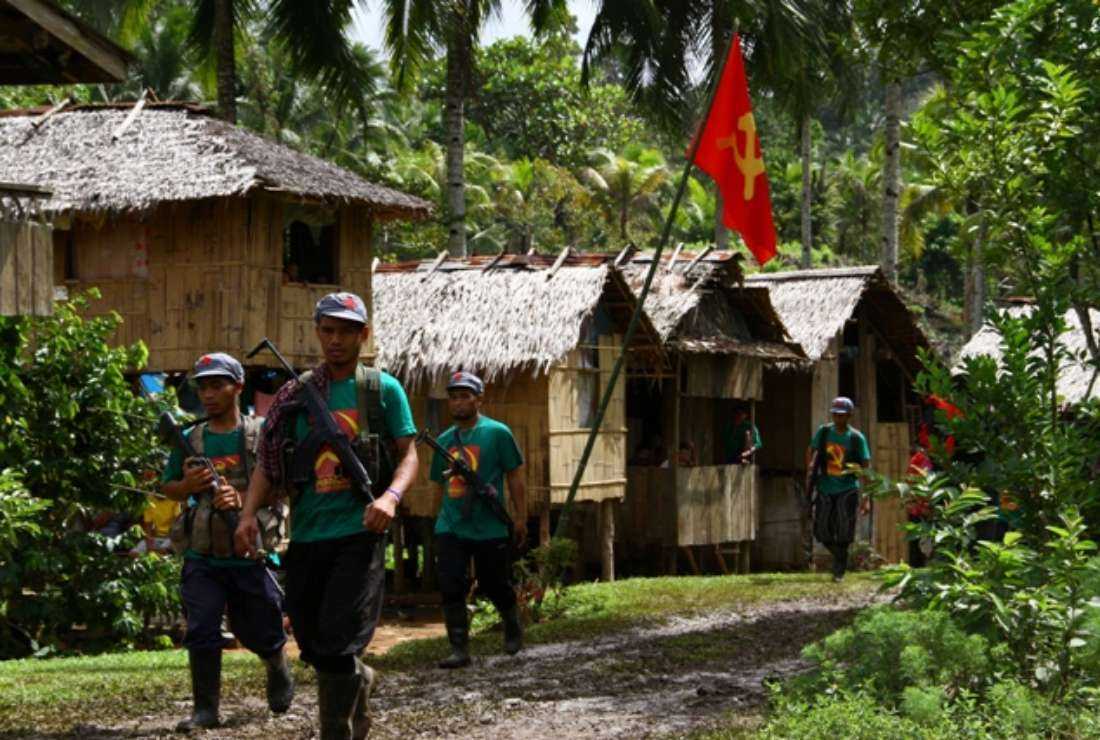 Members of the communists' armed wing, the New People's Army (NPA), walk past a hammer and sickle flag displayed in a village as they mark the 46th anniversary of its founding, on the southern island of Mindanao, on Dec. 26, 2014. (Photo: AFP)

Hundreds of villagers have fled their homes in two provinces in the Visayas region of the Philippines as deadly clashes erupted between the military and Communist rebels.

The rebels from New People’s Army (NPA), the armed wing of the Communist Party of the Philippines and military forces have started exchanging fires in the provinces of Negros Occidental and Samar on Oct. 6, security officials said.

At least two soldiers were killed and another two wounded in the clashes, while a child was allegedly hit by a stray bullet in Samar province.

“The Philippines is not a safe haven of terrorists. We do not breed terrorists. Rather we protect our citizens from them in order for our citizens to live in a peaceful and orderly society,” armed forces spokesman Colonel Medel Aguilar told reporters on Oct. 7.

The fighting forced hundreds of villagers in Negros Occidental as the military forces attempted to flush out a group of rebels camping on a hillside in the province.

“We acted based on the information of civilians because they (civilians) know that the New Peoples’ Army has been declared a terrorist group by the Anti-Terrorism Council. Any person or group caught aiding or helping them is guilty of aiding terrorists pursuant to the Anti-Terror Law,” Philippine army Brigadier General Inocensio Pasaporte of the 303rd Infantry Brigade told reporters on Oct. 6.

“It happened early in the morning around 6 o’clock so children were on their way to school and residents were preparing for work… It’s good that no civilian was hurt although some nonmilitary infrastructures were hit by bullets by the fleeing rebels,” Pasaporte added.

Residents fled by climbing the mountain barefoot for fear of being hit by stray bullets.

“We heard the bullets hitting the concrete wall beside us. It looked like someone was hammering the entire wall to collapse so we are very afraid. We put our heads down,” resident Arnel Cabangcal told UCA News.

Cabangcal said several families took shelter in a nearby parish.

“My relatives are at San Isidro Parish for safety. They were lucky because they had a car so they could get there easily to escape. But many of us who do not have motorbikes had no choice but to seek shelter here. Of course, we went to buildings with concrete houses so that the bullets could not penetrate the walls,” Cabangcal added.

“We have at least seven families here in the parish. We have advised them not to go back to their village yet because shots could still be heard in the area. We will wait for the advice of authorities if it will be safe for them to return,” Father Santiago told UCA News.

In Samar province, two soldiers died, another two were wounded, and a 10-year-old girl was hit by a stray bullet when NPA rebels allegedly attacked army troops patrolling the village of Jipapad.

An army officer said they have been hunting for the rebels who killed fellow soldiers.

An official from the Catholic Bishops’ Conference of the Philippines (CBCP) condemned the violence and called for peace.

“The cycle of violence must end. We are all Filipinos and therefore we must strive for peace,” Percival Cruz, a member of the CBCP Laity Commission told UCA News.

The NPA was formed shortly after the Communist Party was established in 1968-69. It has been engaged in guerilla warfare against successive government regimes to grab power with revolutionary insurrection.

The Philippine government declared NPA a terrorist group in 2017. The United States and European Union have also designated it as a foreign terrorist organization.