A series of arrests are widely seen as orchestrated, but the Cambodian govt says threats are real Share this article :
A recent spate of arrests raises questions concerning the Cambodian government's motives in a seemingly never-ending quest to root out purported terrorists. The government recently circulated to media outlets a photo of eight handcuffed Cambodians, ranging from young men to an elderly woman, lined up behind an allegedly seized cache of AK-47s and surrounded by police. They don't have the appearance of hard-bitten terrorists. Nonetheless, they are accused of planning to overthrow the world's longest reigning prime minister, Hun Sen. The eight suspects were last week charged with trafficking firearms intended to be used in a plot to overthrow the government and were linked by police to the shadowy Khmer National Liberation Front (KNLF) and Tiger Head movements.
Related News 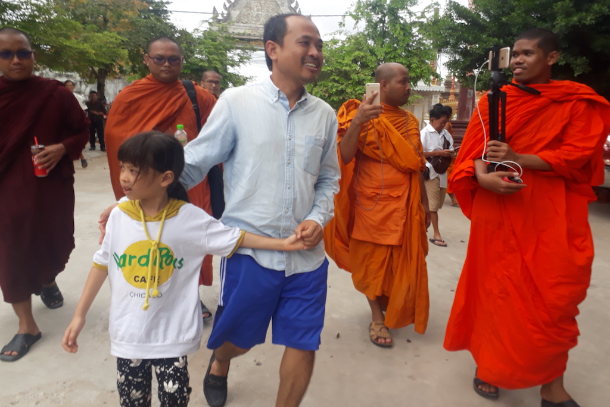 A man named Ros Samon was arrested soon after on suspicion of being behind the plot and admitted to receiving money from exiled KNLF president Sam Serey, the English-language Khmer Times newspaper reported. There are currently 18 alleged members of the KNLF serving lengthy jail terms in Cambodia. Sam Serey insists his movement is committed to non-violence. He was sentenced to nine years' imprisonment in absentia two years ago after being found guilty of plotting an attack. He has yet to begin serving the sentence as he remains in exile in Denmark, where he fled to in 2010. In April, he was arrested in Thailand after his visa expired, but was allowed to return to Denmark despite the efforts of the Cambodian government to have him handed over.  Contacted in Copenhagen last week, Sam Serey claimed he did not know any of the alleged KNLF members arrested and said it was likely an effort to "defame him after he met with Rhona Smith, the U.N. special rapporteur on human rights in Cambodia, in Geneva last month. "It is because KNLF is more popular now," he said, without stating how many active members it actually has. "We are gaining more support from Cambodian people and the international community."  The latest arrests came in the wake of myriad similar cases of people being taken into custody for allegedly joining groups plotting to topple Hun Sen, who has been in power for 33 years. The government has accused the KNLF of being an offshoot of the so-called Tiger Head movement. The Tiger Heads were accused of masterminding two Phnom Penh bomb plots in 2007 and 2009, which led to four of the group's leaders being sentenced to between 20 and 28 years in prison. Neither of the bombs detonated and all four have maintained their innocence. The only group to have been proved to pose any substantial violent threat to the regime was the Cambodian Freedom Fighters (CFF), an anti-communist paramilitary group. On Nov. 24, 2000, dozens of rebels armed with rockets and grenades attacked government buildings in the capital, Phnom Penh, killing several people and injuring many more. Chhun Yasith, a Cambodian-American accountant, was jailed for life in the U.S. in 2010 for plotting the failed coup. Despite the Cambodian government's claim that the likes of the KNLF and Tiger Heads pose an existential threat to stability in the country, analysts suggest there could be ulterior motives behind the continual rooting out of alleged 'terrorists' with scant evidence. "Their importance has been vastly overblown by the Cambodian government," said Sebastian Strangio, author of 'Hun Sen's Cambodia'", regarding the KNLF and Tiger Heads. "Like any authoritarian state, Hun Sen's Cambodia finds it convenient to have enemies — internal and external — that it can point to in order to justify crackdowns on political opponents and other dissenters." The CFF's botched effort in 2000 was the one real attempt at a coup since Hun Sen solidified his full control after factional fighting broke out with royalists in 1997, and even that dissolved into chaos at the first spray of gunfire, he said. KNLF President Sam Serey, center back, with alleged armed members of the group, in an undated photograph posted to the National Police website in 2014. (Photo supplied)   Political analyst Meas Nee said there were two ways to perceive the continual quest to jail so-called terrorists. The first was that, in fact, the threat of violent upheaval is genuine. The second was that Hun Sen could be looking for propaganda material in the face of further sanctions that have been threatened by the U.S. and the E.U. after the opposition Cambodia National Rescue Party (CNRP) was outlawed last year and its leader, Kem Sokha, thrown in jail. Sokha was transferred to house arrest last month after the ruling Cambodian People's Party (CPP) party won all 125 National Assembly seats in July's widely discredited general election. "Then, Hun Sen probably has to look for another motive to say: 'Hey now we have our country facing an emergency threat by terrorists and we need to handle it,'" Nee said. Anthony Davis, a Bangkok-based analyst for the defence and security publisher, Jane's, said the credibility of recent accusations against the alleged KNLF members hinged on whether there was evidence linking them to the weapons. "On the other hand, in a country like Cambodia under an increasingly authoritarian regime, the possibility that they were set up can hardly be discounted," he said. There were also often grey areas in the definition of a 'terrorist', Davis pointed out. "In situations where democratic avenues are being cut off leading to frustration and anger, some people may indeed actually gain access to some weapons," he said. "That does not necessarily make them terrorists with any training or real capability." The government hasn't just saved its labeling of terrorists for obscure fringe groups. In January, Military Police chief Sao Sokha branded the Cambodia National Rescue Movement, a group created by exiled former opposition leader Sam Rainsy after the dissolution of the CNRP, as terrorists planning to cause chaos. Interior Ministry spokesman Khieu Sopheak could not be reached for comment but told The Phnom Penh Post that the latest suspects were "bandits" who could join with an opposition party. Government spokesman Phay Siphan declined to comment on the ongoing investigation but said that the government was dedicated to maintaining national security. Cambodia just emerged from the tumult of the Pol Pot and civil war periods and people still had "unstable minds" so there had to be a high priority given to security issues, he said. However, Sebastian Strangio said the ruling party was deliberately reminding its opponents that it is dangerous for them to cross the regime. "This is a ruling party determined to magnify every minute threat into an existential national security challenge," he said. All the better to keep opponents of the ruling Cambodian People's Party on the defensive, he added.