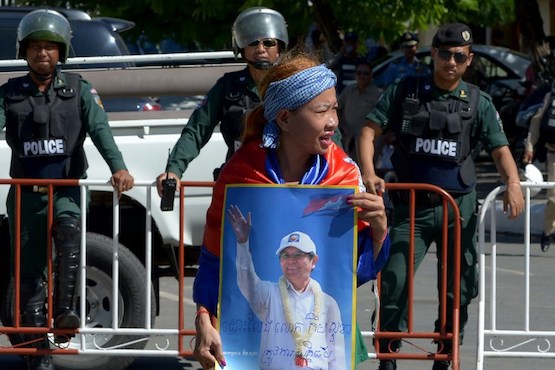 A Cambodia National Rescue Party (CNRP) supporter holds a placard with a portrait of CNRP leader Kem Sokha as police block a street during a protest outside the court of appeal in Phnom Penh on Sept. 26. Kem Sokha, was arrested on so-called treason charges earlier that month. (Photo by Tang Chhin Sothy/AFP)

Prime Minister Hun Sen and his government appear determined on turning Cambodia into a criticism-free state by any means necessary, said a leading rights group.

Amnesty International have censured the Cambodian authorities' efforts to shut down the country's main opposition party ahead of next year's general election.

The country's Interior Ministry filed a complaint on Oct. 6 with the Supreme Court asking for the opposition Cambodia National Rescue Party (CNRP) to be disbanded before the July 2018 elections.

It is the most recent act in what is seen as a persistent effort to stop all forms of dissent, no matter how peaceful, said James Gomez, AI's director for Southeast Asia and the Pacific, in a statement.

"[It] is a blatant power grab and another escalation in the authorities' crackdown on all forms of dissent," said Gomez.

The Interior Ministry argued that dissolving the CNRP would be acceptable since new legal amendments passed earlier in 2017 ban political parties from "conspiring with criminals."

This effort comes not long after CNRP leader, Kem Sokha, was arrested on so-called treason charges on Sept. 3. Kem Sokha has remained in detention since.

The Interior Ministry's move came in the same week as CNRP deputy leader, Mu Sochua, fleeing the country because she feared arrest.

"The Cambodian authorities' attempts to jail and harass key opposition figures through baseless and politically motivated criminal charges must end immediately," said Gomez. "But the cases of Mu Sochua and Kem Sokha are just the tip of the iceberg."