The move comes on the heels of the prosecution of opposition leader Kem Sokha, who founded the CCHR, and the dissolution of his Cambodian National Rescue Party (CNRP).

Kem Sokha established the CCHR in 2002 and resigned from the group in 2007 to return to politics. The center, based in Phnom Penh, has worked on various issues to promote respect for fundamental rights recognized under international human rights law. These include human rights education, rural land rights, and the rights of lesbian, gay, bisexual and transgender (LGBT) people. The center has also provided free legal aid to victims of human rights violations.

"Prime Minister Hun Sen needed little time after shutting down the main opposition party to go after a major human rights group," said Brad Adams, Asia director at Human Rights Watch. "The prime minister is showing his fear not only of free elections, but of free expression and association." 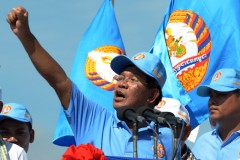 Desperate to hang on, a strongman shows his true colors