Rights groups say the Cambodian PM is trying to legitimize the junta regime that has killed more than 1,400 people 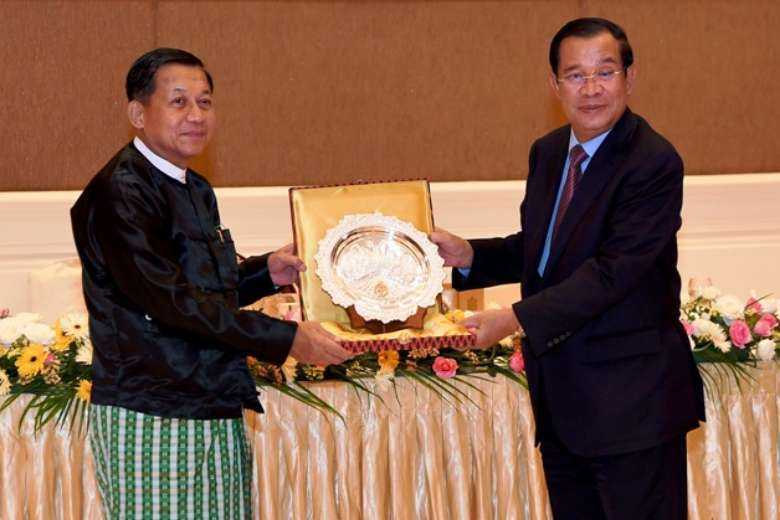 Cambodian Prime Minister and ASEAN chair Hun Sen says he will invite Myanmar’s military ruler to this year’s leaders’ summit despite no significant progress in restoring peace in the Southeast Asian nation.

ASEAN (Association of Southeast Asian Nations) had reached a five-point consensus with junta chief General Min Aung Hlaing in Jakarta in April 2021 calling for an immediate cessation of violence in Myanmar, constructive dialogue and a peaceful solution in the interests of the people.

The violations continue even after Hun Sen’s visit to Naypyidaw this month with the reported massacre of 10 ethnic Chin villagers, prompting more than 1,000 people to flee across the border into India, besides reports of airstrikes in Loikaw, capital of Karenni state, displacing about 40,000 civilians.

Hun Sen is due to hold talks with Min Aung Hlaing on Jan. 26 but told Malaysian Prime Minister Ismail Sabri Yaakob a day earlier that the invitation to the ASEAN summit would be extended.

Cambodian delegate minister Kao Kim Hourn said the invitation was still contingent on Myanmar making “positive progress” on the five-point consensus. If not, then “the senior general shall send a non-political Myanmar representative” to the summit later this year.

The summit includes leaders of all ASEAN countries and dialogue partners including Australia, New Zealand, the United States and Britain.

The ceasefire, the cessation of violence and the humanitarian assistance are important things to be addressed, especially providing humanitarian relief to Myanmar without discrimination

“Myanmar's crisis is complicated and cannot be resolved in a few days. It takes time,” Kao Kim Hourn said.

“The ceasefire, the cessation of violence and the humanitarian assistance are important things to be addressed, especially providing humanitarian relief to Myanmar without discrimination.”

The February 2021 coup resulted in Myanmar’s military administration being banned from attending ASEAN conferences and summits held in Myanmar in 2021, which Hun Sen — an authoritarian in charge of a one-party state — has sought to lift as this year’s chair of the bloc.

On Jan. 7, Hun Sen become the first national leader to visit Myanmar since the coup and announced an extension of a ceasefire with ethnic groups, as agreed by all 10 members of the bloc as a basis for negotiating with Min Aung Hlaing.

But he has since faced strong international criticism, including from ASEAN members, for attempting to bring Myanmar back into the ASEAN fold, with human rights groups claiming he was simply trying to legitimize a regime blamed for the deaths of more than 1,400 people over the last year.

“ASEAN’s response to the attempted coup in Myanmar has been far from perfect,” said Charles Santiago, chair of the ASEAN Parliamentarians for Human Rights.

“Hun Sen’s visit to Myanmar — and the ensuing joint statement he signed with junta leader Min Aung Hlaing — risked completely undermining that progress,” he said, adding there were 7,686 armed clashes and attacks on civilians across Myanmar since the coup.

Meanwhile, ethnic Chin from the Myanmar diaspora have urged the United Nations to launch a humanitarian relief operation to help those fleeing Myanmar into India.