Amid the burning pyres of pandemic victims in New Delhi, oxygen and medicines are sold at inflated prices on the black market 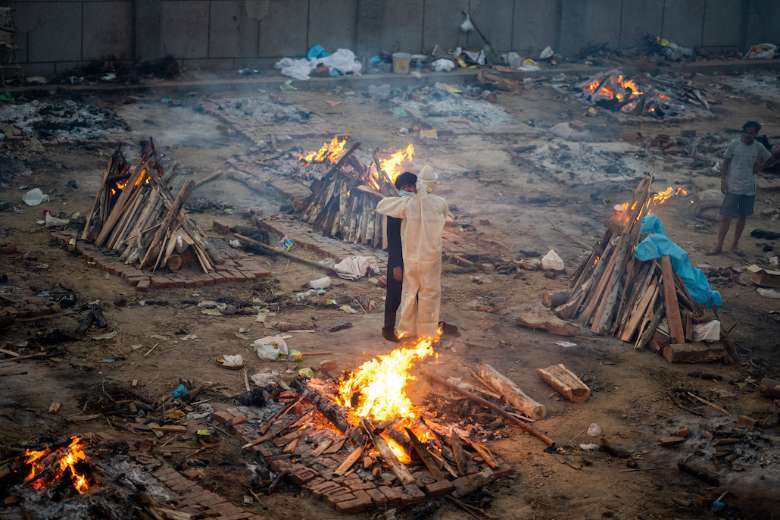 Family members embrace amid the burning pyres of Covid-19 victims at a cremation ground in New Delhi on April 26. (Photo: Jewel Samad/AFP)

The bodies of Covid-19 victims are piling up in mortuaries and abandoned bodies are left near crematoriums amid a thriving black market for medical oxygen as coronavirus cases spiral in India’s capital.

Fear of infection, a lack of medical facilities and days of waiting for cremations are said to be the reasons for the dozens of bodies seen abandoned at crematoriums in New Delhi.

"We Indians talk big about humanitarian aspects and religious ideologies, but people display their baser instincts when faced with life’s realities,” says Pongsing, a Christian resident of Delhi who lost a family member to Covid-19.

“There is rampant black marketing of oxygen and some medicines. A cylinder of oxygen is sold at 30,000 to 40,000 rupees (US$400-500) on the black market. As we suffer, some people are focused on minting money."

The black market price of an oxygen cylinder is up to 10 times more than the actual of cost of 4,000 rupees.

Pongsing’s cousin lost his wife in the second Covid wave that hit India in April.

“There was no one to help. I think the entire atmosphere around Delhi hospitals is of utter frustration now,” he says.

“Those who bring their near and dear ones to hospital look almost reconciled that they will not get back their relatives."

Some 300 people are dying daily in New Delhi. The death toll has been increasing rapidly in the past week. India has been reporting more than 3,000 deaths each day, up from 2,000 in the previous week.

Crematoriums in the capital are burning multiple bodies and in most of them bodies are lined up in the open because of the backlog. In most cases, no relative comes to receive the ashes or perform the rituals that Hinduism demands are necessary for the repose of the departed soul.

"Faith has become secondary in a country where we make a big fuss about rituals and religiosity. Now, everyone is busy saving their own life. It is a sense of reconciling to faith," says Delhi resident Mohini Sachdeva.

The mass burning of bodies and the utter confusion over who is taking the ashes of whose bodies has sparked a discussion on the concept of last rites and Moksha.

Hindus believe that a deceased’s ashes need to be immersed in the River Ganga at Varanasi or in other temple cities for the soul to attain Moksha, the union with the supreme God ending the cycle of rebirth.

But a temple priest in Delhi explains that all rituals are linked to faith and liberal Hinduism can be practiced in any situation.

“Hinduism is very liberal and flexible. Our ancestral sacred books say that all rituals should be pragmatic and realistic. If you cannot find the Ganga in your neighborhood, other water bodies are allowed for the immersion of ashes,” he says.

In today's circumstances, survival would get precedence even over prayers and rituals

Similarly, if a body cannot be cremated, it may be disposed of in other ways.

“The Antyeshti, or last rite, is linked to the faith that the soul or Atman is immortal. So, it is not a sin to not cremate the body or not to collect the ashes. If one cannot collect the ashes, the son of the deceased or a close relative can make a formal request to the priests to hold the last rite without ashes,” says the priest, who requested anonymity.

"In today's circumstances, survival would get precedence even over prayers and rituals. All these have been made and followed for human beings; the human beings are not made for rituals.”

Delhi is building cremation platforms in parks to ease the pressure on its crematoriums.

But amid the helplessness and utter frustration, the roles of administrative authorities have been found wanting.

Delhi High Court has criticized the city government's handling of the pandemic. The court threatened to dismiss the government led by Chief Minister Arvind Kejriwal and hand it over it over to the federal government.

On the other hand, opposition parties say the chief failure for the present mess must be attributed to the federal government led by Prime Minister Narendra Modi.

It would be unfair to blame one party or the other. This is crisis time on the global stage

But local leaders of Modi’s pro-Hindu Bharatiya Janata Party (BJP) say it is not the time for a political blame game.

"It would be unfair to blame one party or the other. This is crisis time on the global stage. We do not want politics. India has suffered, it is true,” says Pankaj Chaturvedi, BJP spokesman for Madhya Pradesh state.

However, he said, as India is a federation of states, “the role of the state governments cannot be ignored either.”

The second Covid wave has resulted in the emergence of the virulent Indian variant of the virus, and the World Health Organization says it has already affected 17 countries.

Some 38 percent of global cases have been reported from India in the past week.

The pandemic has infected more than 19 million people and claimed 211,853 lives so far in India.