Calls acts of graft from within church 'more disastrous than leprosy' Pope Francis celebrates the Corpus Domini after a procession from the Archbasilica of St. John Lateran to the Basilica of St. Mary Major to mark the feast of the Body and Blood of Christ, on June 18 in Rome. (Photo by Vincenzo Pinto/AFP)

Christians and non-Christians must join the fight against corruption, which tears apart the bonds that unite humanity, Pope Francis said.

Corruption "reveals such strong anti-social conduct" that it "dissolves the pillars upon which society is founded: coexistence among people and the vocation to develop it," the pope wrote in the preface to a new book.

"Corruption breaks all of this by replacing the common good with a particular interest that contaminates every general outlook," he wrote. "It is born of a corrupt heart and is the worst social plague because it generates serious problems and crimes involving everyone."

The meeting looked at corruption as a global problem and at its connections to organized crime.

Writing the book's preface, Pope Francis said the etymology of the word "corruption" conjures images of a heart that is broken and ruined "like a body that in nature enters into a process of decay and stench."

The scourge of corruption, he said, is behind the exploitation of people and the environment, the trafficking of humans, arms and drugs, as well as the violation of human rights.

However, he said, even the church isn't immune to the dangers of corruption, which manifests itself in a way "that is more disastrous than leprosy."

"Our corruption is spiritual worldliness, being lukewarm, hypocrisy, triumphalism, making the spirit of the world dominant in our lives, the feeling of indifference," he said. Reforming the church: Inside the mind of the pope 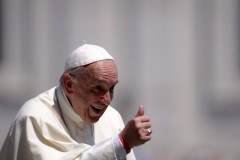 To fight this, Pope Francis said the church must listen and console those who are suffering and should do so "assiduously seeking the way to improve itself."

Full Story: Humanity must unite in fight against corruption