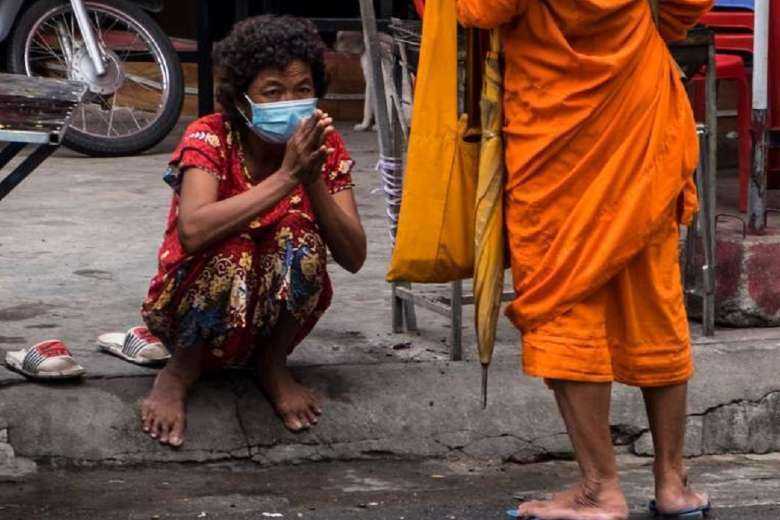 A woman prays before a monk in a Phnom Penh street. Rights groups say the economic crunch caused by Covid-19 has forced many Cambodians to chance their luck with human traffickers. (Photo: Luke Hunt/UCA News)

Cardinal Charles Bo of Yangon has decried the scourge of modern-day slavery as it happens all over the world including in war zones where millions are fleeing.

Spiraling conflicts in places like Ukraine and Myanmar have infused “a new and desperate urgency into this issue,” said Cardinal Bo, also president of the Federation of Asian Bishops' Conferences.

“The moral holocaust of the commodification of human fragility rages. It is compounded by unscrupulous monetizing of human tears and vulnerability,” Cardinal Bo said in a keynote address of the Santa Marta Group’s meeting at the Pontifical Academy of Sciences in the Vatican on May 18.

“While thousands are exhibiting poignant shows of generosity to the war-affected, the heartless march of trafficking wolves masquerading as benign helpers rolls on,” Bo said.

He said every Christian is mandated with the mission to fight this. To be a Christian today is “to wage a war against human trafficking.”

He cited Pope Francis’ remarks about human trafficking being a “crime against humanity” because it denies the human dignity of the victim, seeing him or her only as a piece of merchandise to be used to enrich or give pleasure to another.

The outspoken cardinal warned of an emerging “new type of cannibalism” as its impending dangers are never to be minimized in our urge for caution despite it being a controversial term.

“The gravity of human trafficking threatens the very existence of communities in many countries. A new threat has emerged from a surprisingly new sector: the medical sectors,” he said.

He added that the most unscrupulous channels of exploitation target the most vulnerable people, especially in the poor countries of Asia and Africa.

The 73-year-old cardinal said the Church has been at the forefront of the campaign against human trafficking as Pope Francis has emphasized prevention, victim protection and the legal prosecution of perpetrators.

“The Church and its partners are confronted with a new unsettling reality impacting thousands of the most vulnerable, especially women and children,” Bo said.

He also outlined four areas that need attention and awareness building of local churches to help those in vulnerable social contexts such as society, polity, economy and rule of law.

“Human trafficking is the modern burning bush,” said Bo, adding that “we are called to participate, share and be in mission with the victims and survivors of human trafficking, commodification and cannibalism.”