In the search for a better life, refugees pay large amounts of money to reach Malaysia or Indonesia 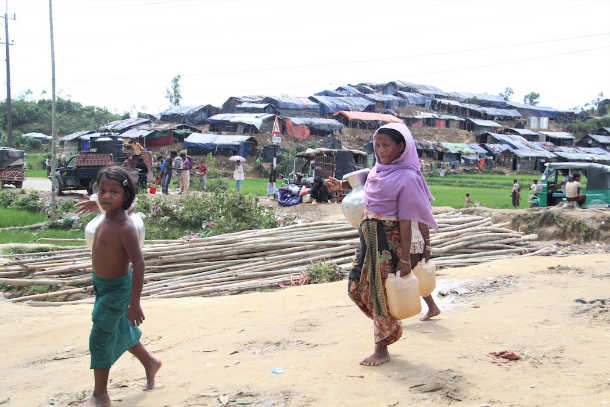 Rohingya refugees on their way to collect drinking water at Kutupalong camp in Cox's Bazar on Sept. 29. (Photo by Stephan Uttom/ucanews.com)

Bangladeshi authorities are cracking down on human traffickers preying on Rohingya refugees desperate to find a better life elsewhere in Southeast Asia.

In the past two months, Bangladeshi authorities have stopped 80 Rohingya refugees from boarding trafficking boats in the Cox's Bazar district.

The boats were to take the refugees to Malaysia.

Nahid Adnan, assistant police superintendent of Ukhiya circle in Cox's Bazar, told ucanews.com they have systems in place to deal with traffickers during the 'sailing season' that follows the monsoon's end.

"We have a comprehensive surveillance system in place at 32 refugee camps with police, border guards and military to thwart any criminal activity including trafficking," said Adnan.

"However, traffickers have been trying to evade our monitoring and lure Rohingya to get into their boats," he said.

Some traffickers have been arrested, he said.

Cox's Bazar has over 30 refugee camps that shelter more than one million Rohingya Muslims from Myanmar's Rakhine State. Most of them fled to the camps to avoid deadly crackdowns carried out by the Myanmar military and local militia in 2016 and 2017.

Despite the relative peace and security Rohingya have in Bangladeshi camps, many look for better prospects elsewhere, namely in more wealthy Southeast Asian countries such as Malaysia and Indonesia.

"Rohingya are landless and stateless people, but they yearn for better lives. They have an uncertain future," Abu Morshed Chowdhury, an anti-trafficking campaigner in Cox's Bazar told ucanews.com. "So, traffickers lure them with good jobs and marriage prospects for women," Chowdhury said.

"We have been keeping in touch with Rohingya mazis (block leaders)," Gomes told ucanews.com. "We know of some unidentified people making various offers to Rohingya to entice them out of the camps," he said.

Upcoming national elections in Bangladesh could put more pressure on law enforcers by diverting their attention from combating trafficking gangs, he said.

Rohingya refugees say they are aware about the risks that human trafficking poses.

"Some of my friends are interested to move to Malaysia by boat, and I know they have to pay 50,000 Taka (US $600) to traffickers to make that happen," Muhammad Ali, 25, a father of two from Kutupalong refugee camp told ucanews.com.

Alim Hossain, 20, from Balukhali refugee camp said he is considering going to Malaysia.

"My elder brother and two maternal uncles are in Malaysia and they told me they would help get there," Hossain told ucanews.com.

"I am interested because there is no guarantee that any Rohingya will be able to return to Myanmar and there is no chance for a better life for refugees here," he said.

Meanwhile in Myanmar, displaced Rohingya have also been risking their lives to head to Malaysia on trafficking boats since October.

In 2015, Malaysia and Thailand launched crackdown on traffickers following the discovery of mass graves of trafficking victims on the Thai-Malay border.

The crackdown forced a collapse of regional trafficking networks, resulting in dozens of boats full of desperate Rohingya and Bangladeshis being left adrift on the Andaman Sea.