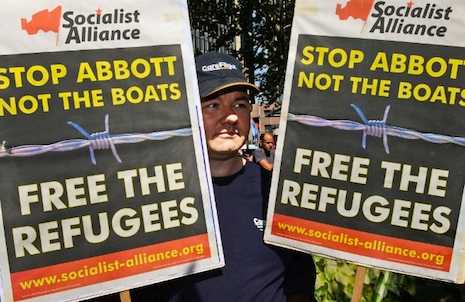 Human Rights watch on Wednesday castigated Australia for undermining its leadership role on human rights in the Asia-Pacific region by failing to maintain international standards for the protection of asylum seekers.

The criticism came a day after the release of HRW’s annual World Report, the first to include a distinct chapter on Australia, where the New York-based group opened a new office in August last year.

The World Report noted the introduction of mandatory offshore detention of asylum seekers, fast-track deportations and the denial of government-provided legal assistance.

HRW’s criticism also coincided with a growing war of words between Australia and Indonesia.

Djoko Suyanto, Indonesia’s coordinating minister for political, legal and security affairs, fired back in an email to reporters.

“The Australian government, under the leadership of PM Tony Abbott, must also understand the meaning of the Republic of Indonesia’s sovereignty, which has been easily violated by the Australian navy,” he wrote in the email, as reported by the Jakarta Globe.

Suyanto added that Indonesia would step up maritime patrols to ensure the integrity of its territorial waters.

Father Frank Brennan SJ, professor of law at Australian Catholic University, acknowledged Australia’s early commitment to international protections for refugees, noting that Wednesday marked 60 years to the day that the country signed the UN convention relating to the status of refugees.

“There was a time when we Australians, in a bipartisan way, would have rejoiced at our increasing commitment to such international instruments to help us keep a true course,” Fr Brennan said.

“The [HRW] report is rightly critical of the new Abbott government as well as the previous Labor governments led by Julia Gillard and Kevin Rudd,” he said.

“We stand guilty as charged and meanwhile our relationship with Indonesia is strained, it being a key country with which we need to negotiate if we are to ensure more orderly dealing with asylum seekers in this part of the world.”