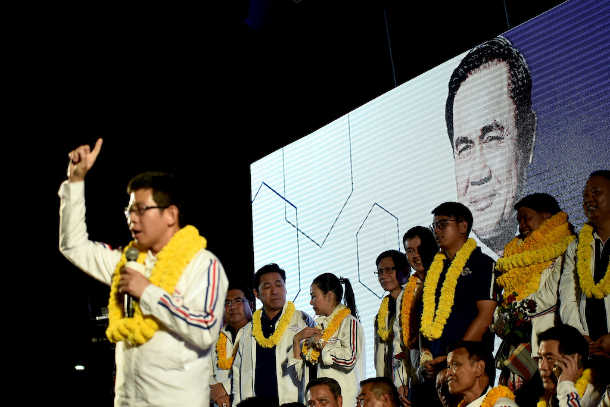 Candidates for the pro-regime Palang Pracharath Party stand on stage in front of an image of current Thai Prime Minister Prayut Chan-o-cha during a rally in the northeastern province of Nakhon Ratchasima on March 10. After nearly five years of military rule, Thailand will hold a general election on March 24. (Photo by Lillian Suwanrumpha/AFP)

None of the Thai political parties vying for votes in the March 24 general election seem strongly committed to bolstering human rights despite an absence of basic rights in the country, according to the International Federation for Human Rights (FIDH).

After five years of military rule that have seen basic rights denied to most Thais, the election is seen as a bellwether of the road Thailand, once one of Southeast Asia’s most democratic countries, will take in coming years.

The signs aren’t encouraging, according to Debbie Stothard, FIDH’s secretary-general.

“It’s disappointing that most of Thailand’s political parties have failed to make bold human rights commitments,” Stothard said. “Their tepid commitments towards human rights are an alarming indication that Thailand’s challenges will continue beyond [the election].”

The rights group conducted a survey with 32 parties in Thailand across the entire political spectrum in an effort to gauge their commitments to the restoration of such essential rights as freedom of speech. The FIDH also quizzed the parties about their political stance on other issues such as the death penalty, the rights of refugees and democratic principles in general.

Notably, 88 percent of the 32 parties surveyed professed support for Thailand’s draconian lese-majeste laws, which have in recent years seen numerous people convicted and sentenced to long prison terms for expressing negative views of the royal family, including monarchs in bygone eras.

“We understand that [the lese-majeste law] is a very sensitive issue, but we are nonetheless disappointed” by the lack of a stronger commitment among political parties to abolish it, said Andrea Giorgetta, director of FIDH’s Asia Desk.

Similarly, only 16 percent of the parties surveyed expressed a desire to abolish criminal defamation laws, which have frequently been used by powerful figures to silence critics by suing them for defamation.

“The defamation provisions in criminal laws have been used against journalists and human rights defenders,” Giorgetta noted.

A member of a left-leaning Thai political party with widespread popular support who spoke on condition of anonymity told ucanews.com that politicians with more progressive views had to tread carefully in the current climate of repression.

Expressing overt support for issues such as the abolition of the lese-majeste law could get a party branded as an enemy of the monarchy, which could invite judicial retribution, the politician said.

Yet it isn’t just on the issue of freedom of speech that Thailand’s political parties seem either highly conformist or else exceedingly guarded.

The FIDH survey found that only 6 percent of Thai political parties said they would consider undertaking a reform of the country’s security sector, including its military, to reduce military interference in politics.

Over the decades the Royal Thai Army has routinely overthrown elected governments in coups, doing so twice this century alone, in 2006 and 2014.  The generals who have been in charge of the country for the past five years have stifled dissent and rewritten the country’s constitution to further entrench the power of officials appointed by the regime.

“Such a low level of support [among political parties] for the reform of the security apparatus is not encouraging, to say the least,” Giorgetta said.

Somewhat more encouragingly, however, 41 percent of the 32 parties surveyed did agree that the military’s budget should be reduced.

Yet even the mere suggestion has drawn ire from the country’s top brass. Last month army chief Gen. Apirat Kongsompong lashed out at the Pheu Thai and Future Forward parties, two of the country’s most electorally viable political parties, for their stated ambition to cut the defense budget significantly.

In an aside, while briefly commenting on the matter, Apirat obliquely labeled politicians expressing such views as unpatriotic and potentially treasonous.

Rights activists stress, however, that the military’s inordinately high budget serves to perpetuate deep-seated inequalities in Thailand, which was rated the world’s most financially unequal country in a Credit Suisse report released last December.

“There is a need to reform the role of the military in the political life of the country,” Stothard stressed. “You can’t have a very high budget for the military without affecting the day-to-day lives of ordinary people.”

Ultimately, Thailand’s culture of impunity, whereby laws are employed punitively by the powerful even as they themselves refuse to be bound by them, is likely to continue unchanged after the election.

“Several political parties are focusing on what they call reconciliation rather than on rights and justice,” said Angkhana Neelaphaijit, a prominent Thai human rights activist whose husband, a lawyer and rights activist, was seized in 2004 by a group of men in Bangkok and has not been seen since. He was likely murdered for his rights activism, but no one has been charged over his disappearance.

“Thailand has a long history of impunity,” Angkhana said, “and I haven’t seen any sign that any of the political parties have clear policies to end this culture of impunity.”

Yingcheep Atchanont, a member of iLaw, which seeks to boost the rule of law in Thailand, agrees. “The election is not a magic amulet,” he said. “These elections aren’t free and fair.”

He is referring to widely shared concerns that owing to legislative sleight of hand the military has rigged the elections to such an extent that it will be able to retain power regardless of the outcome at the ballot box.

“The human rights challenges that Thailand faced before the coup [in 2014] have only got worse since,” Yingcheep said. “Thailand has a very long way to go.”