Human rights off the table as Trump visits China

Despite past rhetoric about China, US president fell into line with Communist Party rules during his trip President Donald Trump speaks to President Xi Jinping in front of First Lady Melania Trump and Xi's wife Peng Liyuan in the Great Hall of the People in Beijing on Nov. 9. (Photo by Jim Watson/AFP)

During U.S. President Donald Trump's official two-day visit to China, the often-unpredictable leader refused questions from the pool of American reporters and screened a video of his granddaughter Arabella Kushner singing a patriotic Chinese song.

Trump's overt capitulation to China could be considered unusual, given he continually vilified the world's second-largest economy as part of his "Make American Great Again" campaign — stigmatizing China as America's arch-enemy.

Despite Trump's rhetoric, his trip to China was centered on inking business deals. While he reportedly signed $250 billion, most deals are non-binding and may take years to materialize, if they ever. Economists have criticized the deals as being just for show.

"[This] is obviously a phenomenal amount of money. This could be, in part, a way to placate Trump… But it also could be a way for China to send a signal to other countries, essentially saying, 'If you show us deference and don't talk about human rights, you'll be handsomely rewarded'," said William Nee, China Researcher at Amnesty International.

This could be a classic example of what Chinese President Xi Jinping's administration has dubbed "win-win" cooperation. While there is little commitment on either side, both parties come out looking good to the outside — especially amid such grand political theatre. This type of cooperation can send a powerful message to those who engage with China.

And during Trump's visit to China, the country's human rights record was indeed not an issue of contention. It perhaps could have come up during questions from reporters, but Trump — unlike previous presidents Barack Obama and George W. Bush — followed the Chinese government's cue to ban the media's questions.

"Any foreign leaders visiting China at this time — during a severe human rights crackdown — should for a start press for the release of political prisoners, such as Liu Xia, wife of late Nobel Peace Prize winner," said Maya Wang, Senior Researcher, Asia Division at Human Rights Watch. "They should also raise concerns about the Chinese government's crackdown on human rights lawyers, NGO workers and ethnic minorities. There's no shortage of topics."

Liu Xia reportedly remains in detention after her husband Liu Xiaobo died in a northeastern Chinese hospital in July, when authorities refused to let him seek medical treatment abroad. Ahead of Trump's visit, literary heavyweights, including Margaret Atwood and Philip Roth to name a few, called for her release. China has also dismissed a call from the United Nations' human rights chief for her freedom.

In the western Xinjiang Uyghur Autonomous Region, thousands of ethnic Muslim minorities are detained in camps to streamline their ideology with the Communist Party's, which is often done by systematically stripping their religious beliefs and exposing them to propaganda. Reports of hard labor and abuse have surfaced over the past months, along with families being separated from their children — who are sent to orphanages throughout China's inner provinces with reportedly abject conditions.

"Human rights, such as a free flow of information and an independent judiciary, are central to healthy bilateral trade relationships," Wang said. "Can foreign consumers be sure of the safety of the products made in China, when the latter does not allow a free press to expose the use of toxic chemicals?" she asked. 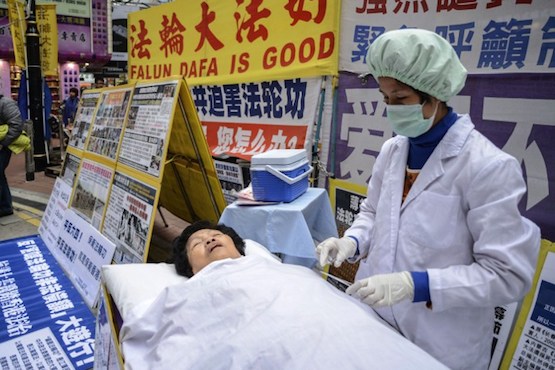 Nee further explained that China's stifling atmosphere for the freedom of expression — which includes censorship of the press, movies, and television — affects American films and Hollywood, media companies, and even academic publishers.

Leading academic publisher Springer Nature — which publishes Nature and Scientific American — recently blocked access to some 1,000 academic articles in China with subjects that touch a sore spot in Beijing. Such topics include Tibet, Taiwan, and Hong Kong, which could potentially raise the issue of a China that is not perceived as unified. Springer Nature is the world's largest publisher of academic books.

Trump heading to Vietnam after China on Nov. 10, where he will first take part in an economic summit meeting in Danang. Trump enjoys widespread popularity in Vietnam, where he is mostly seen as a successful businessman.

A recent Pew Survey found that Trump is in fact more popular in Vietnam than he is back on his own home soil: 58 percent of the Southeast Asian nation has confidence in his ability to lead international affairs.

Trump will then finish his Asia trip in the Philippines, a former American territory. Populist Philippine President Rodrigo Duterte — known for his bloody drug war and openly silencing his political opponents — has said that if Trump brings up human rights, he will tell him to "lay off."

Duterte, despite engineering death squads that have been responsible for the deaths of nearly 10,000, has won praise from Trump. In May, Trump extolled Duterte for doing an "unbelievable job" in the country's war against drugs.

"With Trump, you never know what to expect. He prides himself on being unpredictable. But since he has shown little interest in human rights thus far, and since he has praised Duterte's bloody drug war in a phone call, I wouldn't expect Trump to forcefully raise human rights in these countries either," said Nee.