A Bangladeshi official uses a megaphone to urge residents to evacuate to shelters ahead of the expected landfall of Super Cyclone Amphan in Khulna on May 19. (Photo: Kazi Shanto/AFP)

Millions of people are being evacuated to shelters as an extremely powerful super cyclone heads toward coastal regions of Bangladesh and India.

Super Cyclone Amphan, which formed in the Bay of Bengal on May 16, is moving at a gusting wind speed of 220-230kph and is forecast to make landfall early on May 20.

It became the strongest storm ever recorded in the Bay of Bengal on May 18 after intensifying with sustained wind speeds of up to 270kph, according to data from the US Joint Typhoon Warning Center.

It is the equivalent of a Category 5 hurricane and more powerful than Cyclone Sidr, which left a trail of devastation in Bangladesh’s southern coastal zone and killed more than 3,500 people in 2007.

The storm is expected to be the worst since a 1999 super cyclone that hit eastern India’s state of Odisha and killed about 10,000 people, Bloomberg reported, referring to Indian weather officials.

In Bangladesh, authorities have initiated a massive disaster preparedness plan to face the storm. Danger signal 7 has been advised in all the country’s ports and 14 coastal districts and their adjoining offshore islands, meteorological officials said.

Enamur Rahman, state minister for disaster management and relief, told journalists on May 18 that the government has started evacuating more than five million people in the coastal region.

In addition to about 4,000 cyclone shelters, another 12,780 shelters have been readied to evacuate people, he said. 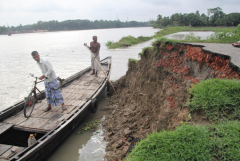 “We have more than 100 staff and over 1,000 volunteers on the ground to assist people to get to cyclone shelters. We have fully prepared 40 shelters and another 30 shelters are being readied by cleaning and sanitizing,” Das told UCA News.

Emergency food grains as well as dried food have been stocked, while separate rooms for pregnant women and possible Covid-19 patients have been prepared in shelters, he said.

“We are collaborating with the local administration, police and other voluntary groups, so that we can reduce the impact of this powerful cyclone on poor and vulnerable coastal communities,” Das added.

In India, Catholic volunteers have joined governmental efforts to evacuate 2.5 million people as the cyclone threatens to sweep Odisha and West Bengal states.

“Our Catholic volunteers have joined the government agencies and other social workers in this massive evacuation mission,” said Father Franklin Menezes, social work director of the Archdiocese of Calcutta in West Bengal.

Church-run schools and community halls are among relief camps for those evacuated to safety, Father Menezes told UCA News on May 19.

West Bengal state has begun to evacuate close to 1.5 million people living in coastal areas, while Odisha has started the evacuation of more than one million people.

“We are working with the government agencies and a network of other social organizations and non-government agencies because of the enormity of the situation,” said Father Menezes, based in Kolkata, the capital of West Bengal state. “The top priority is to protect the lives of people.”

Father Lijo George, social work director of Balasore Diocese in Odisha, told UCA News that they are waiting for governmental permission to join the evacuation process.

The government is making efforts to follow the norms of social distancing to avoid the spread of Covid-19 infections.

People living within three kilometers of the coast are being moved, Father George said.

“In most cases, village people are not willing to move out of their homes because they are not convinced of the severity of the situation,” he said.

Officials of both states told media that they are struggling to find relief camps for the massive number of evacuees.

Several public buildings have been converted into Covid-19 quarantine centers for migrant workers returning to their home states.

“The cyclone will burden the government further and add misery to millions,” Father George said.

Bangladesh is a low-lying country located at the world’s largest river-delta system that empties into the Bay of Bengal. Its unique geography makes the country of more than 160 million people vulnerable to frequent natural disasters including cyclones, flooding and river erosion.

However, in recent decades Bangladesh has developed an effective disaster preparedness system including early warning and evacuation facilities, reducing casualties.