How was the view from the balcony?

Cardinal Tauran, who announced Pope Francis to the world, talks about that night and his work for interreligious dialogue 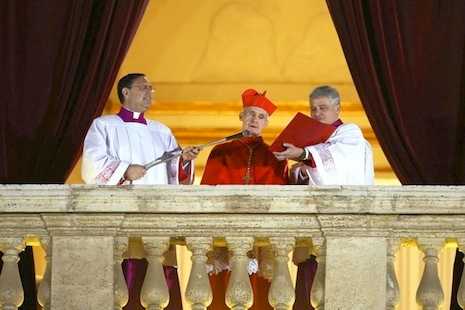 By Manya A. Brachear for the Chicago Tribune

French Cardinal Jean-Louis Tauran has given many lectures, speeches and homilies during his years of Vatican diplomatic service. But most of the world knows him for the two words he declared on the balcony of St. Peter's Basilica on March 13: "Habemus papam!"

As president of the Pontifical Council for Interreligious Dialogue, Tauran visited Chicago last week to mark the 50th anniversary of Pope John XXIII's encyclical "Pacem in terris." Tribune religion reporter Manya A. Brachear sat down with him to reflect on his day job and the historic moment he told the world about the election of Pope Francis.

Q: Every time I watch the footage of you making that announcement from the balcony, I think "What was going through his head?" You had a mischievous twinkle in your eye when the crowd cheered.

A: What an experience. I must say I was thinking about the surprise of all of the people to hear the name. Because it was not one among the papabile, I knew they would be surprised. When he arrived and started with 'Buonasera,' people heard the words they wanted to hear.

Q: Knowing you would be the one on the balcony, did you practice in a mirror? Did you dream about it?

A: No. People asked 'How do you prepare yourself for the Habemus Papam?' I'd say 'No, I'm preparing myself for the conclave.' The conclave is not like the parliament with a campaign. It's a spiritual meeting. You have to remember the conclave is a liturgical celebration particularly from the morning to the evening. It's a spiritual experience. It was very deep for me. It's the manifestation of the singularity of the Catholic Church. You can feel the richness of the life of the church and how the positive aspects are greater than the negative ones.

Q: Was that moment on the balcony a continuation of that spiritual experience for you?

A: It was like a plane takeoff, the beginning of an adventure.

Q: You serve as president of the Pontifical Council for Interreligious Dialogue. What is interreligious dialogue?

A: First of all, you have to remember that interreligious dialogue is not dialogue between religions. It's dialogue between believers. It's not a theological, philosophical exercise. First you have to accept that we live in a world that's plural: culture, religion, education, scientific research. Every human being has a religious dimension. Between believers we try first of all to know each other. And the first thing you have to do is to proclaim your faith because you can not build that dialogue on ambiguity. When we are understood, we have to see what separates us and what unites us and to put those commonalities at the service of society. Dialogue is not for the consumption of the community. It's at the service of society. And remember that man doesn't live only on bread. There are spiritual dimensions. Believers have a special role to play in the public dialogue.

Q: Since Buddhism is a philosophy, not a religion, can Buddhists play a role in interreligious dialogue?

A: Oh, yes. Buddhism, Islam, African religions. In Europe, Islam is problem No. 1.

A: There is a lot of ignorance. People are afraid because they don't know each other. And of course, terrorism. Some radical Islamists don't give a good image of Islam, so people are afraid. So it's very important to dialogue, to know each other. What does the Quran say? What does the Muslim say? You see, you have four modalities. First of all: the dialogue of life, which is when, for instance, you are living in an apartment building and you have a Muslim family living next to you. They invite you for Ramadan. You invite them for Christmas, and you discover everyday life.

Then you have the dialogue of action. You are the member of a sacred union. You take part in some charitable organization.

Then you have, when possible, theological dialogue. You try to understand one religious concept or another.

Then you have the exchange of spiritual experience between monks. It's a technique of dialogue: meditation. It's important to see there is a part of humanity that can see the root of reality, which is God for us. What is lacking in today's world is interior life.

A: "Oh, yes. Of course. First, we try to see the reason why if it's not possible to overcome. Interreligious dialogue creates a climate of friendship for someone to gain trust of the people in front of you. When you have a human friendship you can build something."

Q: Did seminary prepare you for interreligious dialogue?

A: No. This is a new programmatic after the Second Vatican Council. It was the first time for the Catholic Magisterium to say there can be a ray of truth in other religions.

Q: How does the conversation now about religious freedom factor into the interreligious dialogue?

A: If there is not religious freedom, you cannot dialogue. It's difficult sometimes for people to understand what freedom of religion is because there is freedom of worship, the right of a believer to belong to a community and this community to have a place to worship. Then there is a social dimension of religious practice. That means you take part in public dialogue, schools, hospitals, mass media. There is a social dimension, which is where the problem is.

Q: Is freedom to worship secure in most countries?

Q: Are all religions equal?

Q: Do you see interreligious dialogue taking a new direction in the papacy of Pope Francis?