How to reform the Church? Let us count the ways 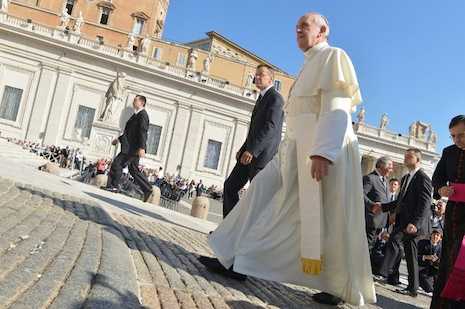 When addressing the cardinal conclave, Cardinal Jorge Mario Bergoglio from Buenos Aires warned of “self-preferentiality” and “theological narcissism,” which he said would lead to a “sick” Church. He particularly criticized the “mundane Church that lives within itself, of itself and for itself.”

Six months into his papacy, it is crystal clear that this Argentine cardinal, now Pope Francis, was very serious about what he said.

In his words and his deeds, in what he has done and what he is laying out to do, there is no doubt that the Catholic Church under Pope Francis is facing a game change.

The first and foremost task, of course, is to sweep clean the Roman Curia, which was a mess by the time of Benedict XVI’s resignation. However, imposing change in a decrepit yet conceited governance system is no easy task.

“Things have gone downhill recently, but the Vatican is too big to function without procedures,” one veteran Vatican official said.

The financial shenanigans and corruption have already been made public, but beneath that there have been the equally corrosive effects of careerism and palace intrigue, which have entrenched the governing apparatus of the papal state for centuries.

Yet Pope Francis is tactfully circumventing the old guard by forming his own secretariat, composed of a handful of Argentines and Italians, who work on the second floor of the Santa Marta hostel, the residence of choice ever since his elevation to the papacy in March.

As governed by this papal “mini-curia,” Francis has not only established the eight-cardinal papal council to study the ways and means of curia reform, but he has also set up a group of mainly lay experts to streamline financial and administration procedures. The significance of the latter decision has already been borne out in the murmurings heard among many observers: is this an omen of declericalizing the headquarters of the Catholic Church?

Fifty years after Vatican II, the Church hierarchy is still full of clericalism, thanks to the disproportionate presence of liturgical traditionalists who populated the upper echelons of the Church during the pontificates of John Paul II and Benedict XVI.

Aspirant clergy, who possess the pseudo-vanity mentality of diocesan chancery officials, often post themselves above, rather than among, the people who they purport to represent.

However, Francis made it clear that his ideal bishops are “close to the people…. and also by outward simplicity and austerity of life.” Further, servants of God “should not have the psychology of princes.”

What is absent from Francis’ list of episcopal attributes were “loyalty and orthodoxy,” the two criteria much emphasized by John Paul and Benedict.

It appears that Francis is doing his due diligence in order to pre-empt the tenacious clericalism, and all its bells and whistles, by severing the mythical umbilical cord tied to the divine lineage, which is habitually invoked for the self-serving purposes of many clerics.

In particular, the phrase “should not have the psychology of princes” may be aimed at the cardinals who form the Church’s most elite members, some believe. One of them will one day become the “crown prince” and inherit the throne of the Bishop of Rome but that is no excuse for elitism.

Pope Francis is much more lenient towards many social subjects deemed contentious under his two predecessors. Among the highlights:

Francis raised a lot of eyebrows in May after saying all people who do good works, including atheists, are going to heaven.

He also made headlines with his call for the Church to develop a new theology of women, saying women must have a greater role; that Mary is more important than any of the apostles.

Recently, Francis was praised for saying he would not judge a gay person. Contrast that with Pope Benedict XVI, who as Cardinal Ratzinger was thought to  be the driving force behind crackdowns on homosexuality and women’s ordination.

On divorce and remarriage: Francis said "this is a time for mercy."  He wanted the Church's judicial system of annulling marriages to be "looked at again.”

On celibacy of priests: In a 2012 interview, as Cardinal Jorge Bergoglio, he said celibacy "is a matter of discipline, not of faith. It can change. " And now, the  Vatican position is: “the practice of celibacy by priests is open for discussion. “

For the traditionalist Catholics who oppose the modernizing reforms of the Vatican II, Pope Francis unsparingly called them the "restoratist groups," which he accuses of being navel-gazing retrogrades, out of touch with the Church’s evangelizing mission in the 21st century.

In summary: “It doesn’t mean the pope is changing any of the essentials — he is still focused on Jesus Christ and proclaiming the gospel,” as articulated by Fr James Martin, a contributing editor at America magazine. The general consensus of many Vatican observers, however, is that Francis’ papacy will be nothing short of “a revolutionary one,” which will bring the Church in line with "the democratic spirit of our times.”

Four: Developing a theology of the people, for the people

For Benedict XVI, the Church is engaged in the search for absolute divine truth. He identified relativism as one of the most significant problems for faith and morals.

In a book called On Heaven and Earth that he co-wrote, Francis said: “Religious truth does not change, but it does develop and grow. Without the joy of beauty, truth becomes cold and even ruthless and proud, as we see happening in the discourse of many bitter fundamentalists.”

He criticized the way that religious fundamentalism warps and weakens the faithful: "The teacher who is so arrogant as to make decisions for the disciple is not a good priest; he's a good dictator, an eraser of the religious personalities of others.” He continued: “This kind of religiosity, so rigid, wraps itself in doctrines that pretend to provide justifications, but in reality they deny liberty and don't allow people to grow."

For decades, millions have left the Church. Among those who have stayed, many have ignored the Church’s teachings on moral issues. A large number end up living a double life.

The world shouts, the culture is loud and the time has come to ponder and to reflect. The consensus of the faithful is the voice of the infallible Church.

Francis is shrewd, energetic and down to earth. There are signs that substantive changes are taking place. As mentioned above, Francis’ reforms amount to a de facto Francis revolution, which is opening a new chapter in the epic of universal Catholicism.