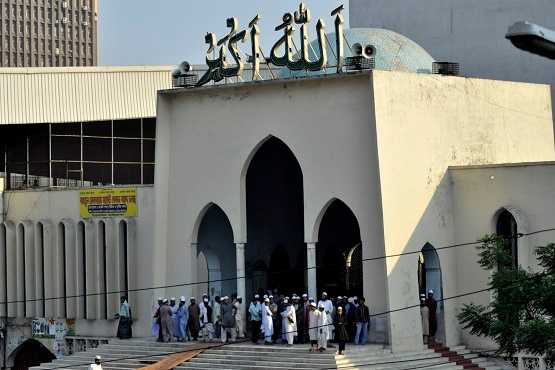 Worshippers at the Baitul Mukarram National Mosque in Dhaka in this 2013 file photo. Bangladesh has seen sharp rise in radicalism in recent times and many believe it is an outcome of Saudi Arabia's effort to promote radical Islam in the country. (ucanews.com photo)

Recent news about Saudi Arabia funneling US$1.07 billion into Bangladesh to build 560 mosques has sparked fears that they will be used to spread radicalism.

Bangladesh, a Sunni Muslim-majority nation, has been known for its secular culture and religious pluralism. Most Muslims in the South Asian nation follow Hanafism and Sufism, two moderate branches of Islam.

The Bangladesh Constitution includes secularism as one of its four founding principles but also recognizes Islam as the state religion, a legacy of illicit amendments to the charter during the military regimes of 1975-90. Even so, the constitution guarantees equal status to all religions.

However, religious fundamentalism has slowly crept into the country over the decades. Since 2013 militants have murdered 46 people including atheist writers, publishers, liberal academics, foreigners, and members of religious and ethnic minorities.

Besides the deadly ideology of the so-called Islamic State (IS), many believe the militants have been influenced by radical Islam as promoted by Saudi Arabia, a country infamous for practicing extreme Wahhabi and Salafist form of Islam.

Over time, Saudi influence and money built up an Islamist movement in Bangladesh. The relationship between the two goes back to the 1971 war of independence.

After the war, Bangladesh was desperate to gain recognition from major Islamic countries like Saudi Arabia to revive their economy and gain access to overseas labor markets.

Today, Saudi Arabia has about two million Bangladeshi migrant workers who send billions of dollars home annually, making a vital contribution to the economy of the country where one-third of people live in poverty.

In exchange for opening the labor market, Saudi Arabia has been allowed to export and promote radicalism in Bangladesh.

"It is nothing new for Saudi Arabia to promote Wahhabi Islam but Bangladesh's economic conditions have changed. People need to question why the government should accept Saudi funds for mosques? Do we really need it?" said retired Major General A.N.M. Muniruzzaman, president of the Bangladesh Institute of Peace and Security Studies.

"Military rulers abused religion to consolidate their power in Bangladesh and Saudi Arabia used this opportunity to fund radical mosques and madrasas," he said.

Saudi Arabia has also patronized Islamist parties including Jamaat-e-Islami in Bangladesh whose sole objective is to establish sharia and implement Quranic punishments. Saudi influence is also thought to be behind rising trend among Bangladeshi women to wear black burqas.

Bangladeshi's have mixed views on Saudi Arabia despite its connection to radicalism.

Considered the guardian of Mecca and Medina, two of Islam's holiest shrines, Saudi Arabia is sometimes called the "protector of Islam."

"People have favorable views towards Saudi Arabia so, even if a secular government is in power, it is difficult to turn down any offer from Saudi Arabia, be it a donation, grant or investment," Muniruzzaman said.

However, some educated and liberal Muslims, as well as intellectuals and religious minorities, think the Saudi influence is a threat to Bangladesh's secular culture and national identity.

"Saudi influence has done enough damage to the soul of Bangladesh and now we need to think about taking Saudi funds if it means bidding farewell to our religious tolerance, harmony and secular culture," he said.

Recent visits by top Saudi Arabian officials have fueled speculation that the wealthy nation is increasingly interested in Bangladesh.

In March 2016, Saudi Foreign Minister Adel Al Jubeir visited Bangladesh, making it the first ever visit by a Saudi foreign minister to the country. During the visit Jubeir said Saudi king Salman bin Abdul Aziz Al Saud was interested in visiting in 2017.

During the trip, Hasina would have been likely to invite the Saudi king to visit Bangladesh this year, reported Bangladeshi English daily The Independent.

The Saudi king is expected bring in huge opportunities for investment and grants worth US$5-10 billion during his trip, the report said.

Observers said "investments and grants" would come as reward for Bangladesh joining the Saudi-led anti-terrorism alliance and promising to send troops to protect shrines in Mecca and Medina. The Saudis are worried about an attack from archrival Shia-majority Iran, a country that has amicable relations with Bangladesh.

"It is difficult to comment on the Saudi-led military alliance as it is still in its primary stage, or whether Bangladesh would gain or lose by joining it but Bangladesh has no option, largely due to the presence of millions of Bangladeshi workers in Saudi Arabia," said Muniruzzaman.

Undoubtedly, Bangladesh is keen to tap into large-scale Saudi investments as it is likely to attract investment from other members of the Saudi-led Gulf Cooperation Council, the retired general added.