Consultant describes his strategy as "masterly" 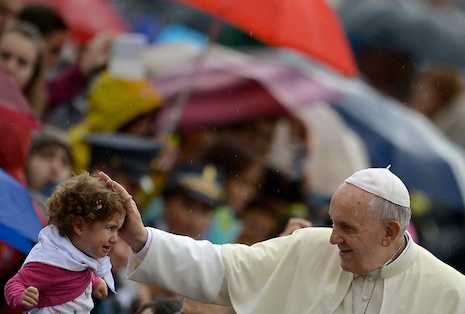 Everybody is telling us what Pope Francis means in what he does and says, particularly in what the media refer to as his "blockbuster" interview published recently in Jesuit magazines throughout the world. He followed that up with an even more provocative conversation with the Italian newspaper La Repubblica.

His Jesuit-oriented interview has been analyzed more than evidence at a crime scene. Each of these interpretations, like Versailles' hall of mirrors, reflects one way of appraising the new pope. The Jesuits are naturally interested in exploring how his training and commitment to the exercises of St. Ignatius affect his outlook and mode of operation. Those interested in his foreign policy look for clues about that while Catholics of the Second Vatican Council speculate on whether he is another John XXIII or not. Others, remembering that a race course once stood where the open arms of the colonnade of St. Peter's Square now close in on new popes, wonder whether he will win the race against old curial racehorses or fade in the stretch.

Bishops, including Chicago's Cardinal Francis George, are quick to reassure us that no matter what you think or wish for, Francis cannot and will not change basic church teachings. The secular media press every new pope on whether he will change such church teachings as those on abortion, birth control or gay marriage. Although the answer is always no, this adds to the angles of our vision of Francis. However you appraise his recent interviews, one cannot miss his big-hearted, inclusive pastoral approach to a world in which he sees the church as a field hospital for the wounded rather than a holding cell for sinners.

The interviews may best be seen as illustrations of how Francis seems to be following the mantra of the turn-of-the-20th-century baseball Hall of Famer Willie Keeler: "I keep my eyes clear and I hit 'em where they ain't."

Through these interviews, Francis is following a clear if unreported strategy of avoiding direct and noisy fights with a Curia anxious to get him, as they have previous popes, under its control. As John XXIII observed to a friend, "The Curia, they think they have me in a bag here."

The interviews provide another example of how Francis refuses to fight directly with the Curia. Instead, he keeps his eyes clear and, much to the Curia's frustration, moves forward in areas "where they ain't."

As a former student, management consultant Michael Burkhart, told me, Francis is "masterly" in "moving things by taking actions that are easy. He's not wasting energy by getting into power struggles with those that will resist the changes. He is using movement in areas that they don't control."