Muhammad Ali Jinnah made a historic speech on Aug. 11, 1947, in which he gave his vision of a country in which religion or belief was a personal matter and no basis for differences of citizenship. (Photo: Wikimedia Commons)

Christians’ unquestionable allegiance and commitment to Pakistan needs to be flagged again in the frame of historical reference after the country celebrated its 74th Independence Day on Aug. 14.

The historical account of Christians’ services to the Indian subcontinent, especially in the field of education, highlights their spirit to serve humanity which brought forward celebrated leaders to demand an independent Pakistan.

Christian missionaries in the region realized that the subcontinent was in dire need of educational institutions that impart quality education. Keeping in view the well-crafted future of this land, they began to materialize their vision in order to transform the stereotypical sociopolitical, sociocultural and socioreligious ideologies.

The first Christian missionary school on the northern part of the subcontinent was established in 1849 at Rang Mehal in Lahore by Dr. Charles W. Forman. This school is still serving the nation but not as effectively as it had been under Christian administration. Forman was a celebrated scholar of his time who also established Forman Christian College in Lahore in 1864. This college has always been regarded as a prestigious institution producing eminent scholars, politicians, bureaucrats, army officers and industrialists.

The other esteemed institutions established by Christian missionaries are CMS School in Karachi, Gordon College in Rawalpindi, Edwards College in Peshawar, Murrey College in Sialkot and Kinnaird College in Lahore. These institutions proved to be an emblem of excellence producing many Christian and Muslim supporters of the Pakistan Movement.

These institutions enlightened the minds of all living in the land including Hindus, Muslims, Christians, Parsis, Buddhists and scheduled castes by imparting modern education based on Western concepts of nationalism, democracy, liberty and equality. However, the most prominent outcome of this education was seen in the most ardent Muslim leaders of the Pakistan Movement such as Quaid-e-Azam Muhammad Ali Jinnah (regarded as Pakistan's founding father), Dr. Allama Muhammad Iqbal and Choudhry Rahmat Ali.

Along with others, Christians also learned in these institutions to stand by the truth and support fairness and justice. So, they set their faces against Hindus’ biased attitudes and actions against non-Hindus. When Jinnah rejected Jawaharlal Nehru’s report and presented his 14 points, Christians also rejected the report at the All India Christian Conference. Interestingly, they offered unconditional support to Jinnah and the All India Muslim League even when Jinnah was being called a British agent by some Muslim religious groups who opposed them and their ideology.

Furthermore, Christians voted in favor of Pakistan before the Boundary Commission chaired by Sir Cyril Radcliffe proved to be decisive in the creation of Pakistan. Christians were also seen and heard chanting “Long live Pakistan” during elections in 1945-46. In acknowledgment and appreciation of these gestures, Christians were promised by the All India Muslim League that they would be offered more privileges than other minorities in Pakistan.

As Jinnah cherished cordial relationships with eminent intellectuals, well-positioned Christians like Joseph Burr (a member of the viceroy’s council and an adviser to the nawab of Bhopal), Sir Samuel Rangandhar (high commissioner in London), K.L. Kundan Lal (president of the All India National Congress), Rev. Andrews and John Bright all favored and supported Jinnah in one way or another in the pursuit of his dreamland.

When Jinnah founded Dawn newspaper in 1941 as a mouthpiece of the Muslim League to promote the Pakistan Movement, he appointed Pathan Joseph, a reputed journalist, its first editor. F.E. Chaudhry, father of squadron leader Cecil Chaudhry, was a photojournalist who promoted the movement by capturing historical moments. Subsequently, his decision to make his two sons join the Pakistan Air Force speaks volumes of his love for Pakistan. Squadron leader Cecil Chaudhry proved to be the pride of his father and the nation as a hero of the 1965 war. 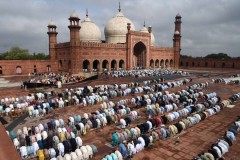 Joshua Fazaldin was another Christian intellectual and proponent of the Pakistan Movement who wrote newspaper articles to promote Jinnah's vision. His passionate support of a separate homeland in his articles won the heart of Choudhry Rahmat Ali when many Muslim leaders were thinking that it was an impractical notion.

Dewan Bahadur S.P. Singha, another Christian intellectual, served as registrar of Punjab University and pushed for educational reforms in the region. Apart from his services in the field of education, he was also a good politician and became speaker of Punjab Legislative Assembly.

Singha was dismayed by Christians' predicament caused by Hindus’ discriminatory attitude towards them. He preferred to support Muslims in their demand for a separate land. He believed their social values were comparatively secular and accommodating in nature. He traveled from city to city to seek Christian support and to convince them that they should claim to be part of Pakistan.

Under the leadership of Singha, Christians began to visualize Pakistan as their land where their social, religious and political rights would be protected. History witnesses that Singha stood before Tara Singh and had a scuffle with him at the gates of the United Punjab Assembly when Singh defied the proponents of Pakistan by waving his kirpan in the air and saying that if someone demanded Pakistan, he would be killed.

Despite other developments, the day had come when it was to be decided by vote whether West Punjab would be included in Pakistan. It proved to be a very stressful situation even for Jinnah when the Muslim League and supporters of Hindustan were on the same number of 88 votes. At that moment S.P. Singha, who had the casting vote as speaker of the assembly, stood up to change the game and cast his vote in favor of Pakistan. The other Christian members of the assembly, Fazzal Ellahi and C.E. Gibbon, followed him. Pakistan won by three votes and West Punjab was included in Pakistan.

Keeping in view the contribution and support of Christians in the Pakistan Movement, Christians in Pakistan still take pride in retaining the spirit of their forefathers which made Jinnah's dream a reality. Their loyalty to the country and efforts in their capacity to make Pakistan livable and lovable are their pride and joy.

Azeem Alphonce teaches English literature at Forman Christian College based in Lahore, Pakistan. The views expressed in this article are those of the author and do not necessarily reflect the official editorial position of UCA News.