How Irish missionaries made their mark across the world 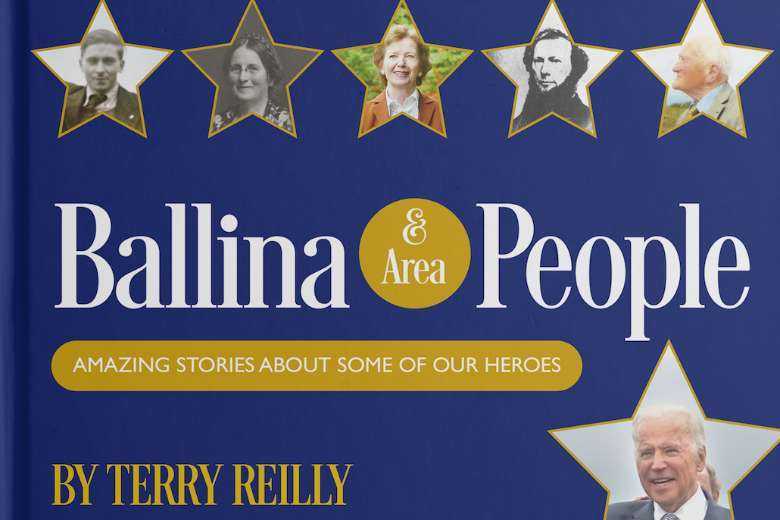 Ballina is a lively town in picturesque County Mayo in the west of Ireland. It lies at the mouth of the River Moy, famous for salmon fishing, near Killala Bay with the Ox Mountains to the east and Nephin Mountain to the west. Situated in the Catholic Diocese of Killala, its population is just over 10,000 people.

One of the most fascinating parts of an area’s history is its people whose stories make up the fabric of the place. The footprints of many people from Ballina and its hinterland have landed all over the world, and their influence is wide. Well-known local historian and author Terry Reilly shines a light on many of these in his new book, Ballina & Area People. He was well placed to write such a social history of his native area having been editor of the local newspaper, The Western People, for almost 30 years.

The footprints and legacy of Irish missionaries are to be found in most countries in the global south, where they have provided services in education, health, special needs, agriculture, income generation, human rights, social justice, peacebuilding and other areas that impact the dignity of the human person and the protection of the environment. Almost every town or parish in Ireland provided men and women who joined that army of missionary ambassadors who devoted their talents and their lives to supporting the poor and the marginalized in developing countries.

Ballina was no different in that regard, and it is wonderful to see Terry Reilly devoting a chapter of his book to missionaries from the area. He introduces the chapter with a very personal account of the high esteem in which Irish missionaries are held in Africa.

He writes: “The role of our Irish missionaries was brought home in a most dramatic way to me when visiting Robben Island, a bumpy 30-minute ferry ride from Cape Town in South Africa, just a few years after Nelson Mandela’s 27 years’ cruel incarceration had been brought to an end.

“Those who have been there will know that you are taken on a bus tour around the island. It was on one such bus that we were welcomed aboard by a lovely black African woman who had herself suffered under draconian apartheid separation laws. After introducing herself, she asked a question she always posed: ‘Where are you all from?’ The answers that came back confidently included ‘England’, ‘America’, ‘Germany’, ‘Malaysia’, ‘Hong Kong’ … Somewhat shyly I offered, ‘Ireland’. ‘IRELAND, IRELAND!’ our guide exclaimed. ‘The one country that came to the aid of our people confined here when it was a leper colony. Your missionaries and what they did here will never be forgotten. You are most welcome. Do you know there is a place here called the Irish Village?”

Reilly uses the story of Sister Mary McNulty from Rathowen near Killala who joined the Pallottine Sisters to illustrate the innovative work that missionaries undertook in developing countries and how that work is now being continued by local sisters who were recruited by the Irish.

Her brother, Kieran McNulty, related the story: “Sister Mary’s dream of being a foreign missionary was fulfilled in 1990, when she was sent to open a mission in Tanzania with two other Pallottine Sisters, at the invitation of the bishop of Singida. Tanzania was then one of the most underdeveloped and poorest countries in the world. They set up their mission in Siuyu, a remote village 20 kilometers from the nearest town, Singida in central Tanzania.

“The Singida region is classified as semi-desert and has a population of over one million. Here the sisters struggled with the ordinary challenges of missionary life — the heat, a very different culture, illnesses, poverty, communications problems, no electricity, shortages of water, and of course money … as well as lots of mosquitoes in the rainy season. Undeterred, they soon learned the national language of Kiswahili and identified secondary education for girls, health care and clean water as the most urgent needs.

“Sister Mary was put in charge of the mission with its many responsibilities. Placing their trust in God, they worked hard to develop the mission. Drilling for water was successful and the building project began. Progress was slow as the bricks and furniture were all made on-site by hand. In 1995, Pallotti Secondary School for girls was opened with one class of 45 girls; today it is a successful institution with nearly 500 students. For 15 years, Sister Mary was headmistress of the school and superior of the Pallottine Sisters in Tanzania. In 1998, the Sisters built a health center in the village, which was upgraded to a dispensary in 2007. It is run by the Pallottine Sisters and provides essential medical services in the area.

“The Sisters celebrated the silver jubilee of their mission in Tanzania with a joyful celebration in 2015. Today they have a flourishing mission with over 50 Tanzanian sisters working mainly in education and health care in four different dioceses in Tanzania.”

Author Reilly points out that Sister Mary is but one of the many great people from the Ballina area who have served on the missions over the past century and more, the majority nuns.

Sister Bernadette Cawley, also from Rathowen, Killala, a Franciscan minoress, served in South Africa. Sister Celsus Nealon from Knoxbarrett, Ballina, a Franciscan missionary of the Divine Motherhood, worked in Nigeria. Sister Gemma Breslin, from Curroy, Ballina, a Medical Missionary of Mary, missioned in Tanzania, Uganda, and Malawi, and her sister, Sister Breege, also joined the Medical Missionaries of Mary and worked in Kenya.

Sister Conchita McDonnell, of Lord Edward Street, Ballina, joined the Missionary Sisters of the Holy Rosary and served in Nigeria, Cameroon, the USA, Brazil and Kenya. Her neighbor, Sister Miriam Treacy, also joined the same congregation and worked in Sierra Leone and in Kenya.

Sister Mary Heffernan of the Mercy Order in Ballina ministered in Africa, while four other Mercy Sisters went to teach in San Diego, California, in July 1969 and were followed by many colleagues over the years. Sister Aquinas McNulty of the same congregation built and managed the ground-breaking Emmanuel Cheshire Invalid Care House in Ballina. She was awarded a national People of the Year Award in 1990 and later served in Romania and Brazil, where she died and was laid to rest in Colinas.

The Religious of Jesus and Mary sisters established a secondary school at Gortnor Abbey near Crossmolina. Several members served in Pakistan including Sister de Salles Timlin, Sister Nancy Doyle, Sister Mercedes O’Boyle, Sister Veronica Barrins, Sister Gráinne Hanley, and Sister Penel Hanley. Sister Freddie O’Connor taught Pakistan’s then prime minister, Benazir Bhutto. On her visit to Ireland in 1994, Bhutto requested that members of the congregation be invited to a state dinner hosted by president Mary Robinson, a native of Ballina, at Dublin Castle. In 2013, Sister Mary Langan was awarded the Tamgha-e-Quaide-Azam Award by the government of Pakistan, a Muslim country, for her services to education.

One of their members, Sister Regina Diamond from Ballina town, was taken seriously ill in Edo State in Nigeria and was brought home where she died just aged 58 years. Shortly before she died, she appealed for help from home and her brother, Pat, and others rallied round. A container sent from Ballina included an old Massey Ferguson tractor renovated by a group of enthusiasts, as well as bicycles, footwear, educational items, etc. The parish of Kilfian raised over €10,000 to cover shipment and insurance costs. This was typical of the support that missionaries received from their families and friends at home in Ireland. Many of them would say that that was part of what sustained them in very poor mission stations.

Father Michael Nallon from Knockmore, also a Columban, served in Korea. Another Columban, Father Paddy Smyth, ministered in Japan. Today, two of my classmates of 1968 in St. Muredach’s College in Ballina, Father Tony Cavanagh from Garden Street in the town — a Columban — and Father Michael Foody from Castleconnor — a Spiritan — minister in Pakistan and Brazil respectively. Father Enda Kelly from Crossmolina — a member of St. Patrick’s Missionary Society — ministered in Zambia and in Nigeria and is now serving in his home Diocese of Killala.

Reilly says: “In 1993, Bishop Thomas Finnegan established the Killala Diocesan Mission to Miracema in Brazil and since then the diocese, in conjunction with other agencies, has resourced a team of missionaries, priests and laypeople. Father Martin Keaveny and his colleagues are exceedingly active there. Father Keaveny worked in Southwark, New York, and, for the past 25 years, in Brazil. The late Father Michael Cawley also served in Brazil, where he was something of a trailblazer and retired reluctantly because of ill health.”

Another Mayo author and historian, Father Brendan Hoban, in his book Kilmoremoy Parish published in 2009, lists many other religious from the area who ministered overseas, with many of them in the UK and the USA as countries to which Mayo people emigrated in bygone decades to make a living.

Terry Reilly has done a marvelous job in recognizing and recording summary details of the lives and work of these missionaries in a book that will be treasured by people not just from the Ballina and North Mayo area but further afield.

I have long advocated for the capturing of the histories of our missionaries in print or digital formats so that this important part of Irish history will be preserved for future generations. The stories of missionaries written from the historical perspective of their place of birth, as Reilly has done so well in this book, are part of the patchwork of our nation’s history on the international stage where these unpaid ambassadors made Ireland known and respected through their diverse ministries and social care. They should be remembered at home.

Matt Moran is a writer who lives in Cork in the Republic of Ireland and is a native of Ballina. Author of ‘The Legacy of Irish Missionaries Lives On’, his forthcoming book is ‘The Theology of Integral Human Development: The Role of Faith in International Development and Public Affairs’. ‘Ballina & Area People’ can be obtained online from www.terry-reilly.com. It costs €20 plus postage.