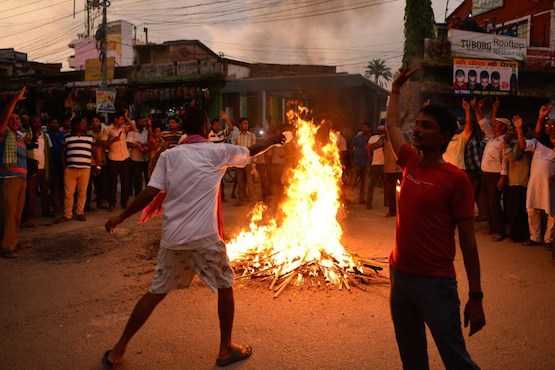 Nepalese Madhesi protesters, a marginalised group in the southern plains, chant slogans during a protest in Janakpur, some 300km south of Kathmandu, in this June 12, 2017 file photo. Nepal held its first local elections in two decades last year, a key stage in the country's post-war transformation from a feudal monarchy to democracy. (Photo by Prakash Mathema/AFP)

By By Prakash Khadka, Nepal

In 2007, I endured a five-day bus trip on a highway in Nepal that required a police escort. During the trip, my fellow passengers and I were pelted with stones and petrol bombs by two separate groups of angry locals calling for their own version of an ethnic state. I came through unscathed but at the time was reminded of the violent ethnic clashes in Rwanda.

Although the situation in this Himalayan nation pales in comparison to the widespread killings during the Rwandan genocide of 1994, a surge in demands made by several ethnic groups are slowly tearing the country apart.

During my visit to the Terai region of southern Nepal I likewise witnessed locals — who had lost access to food and water — resort to looting. It was obvious that surmountable challenges and opportunities face my country.

Not only beset by natural disasters and devastating earthquakes, Nepal has endured extreme poverty, a decade-long Maoist insurgency that ended in 2006 and much more political and social strife.

Nepal's 240-year-old Shah Dynasty came to an end in 2007, leaving most of the power and authority centralized in the capital.

This happened despite the government naming five development regions in its apparent pursuit of greater decentralization.

Effectively a smorgasbord of over 125 ethic groups, Nepal had declared itself a federal republic — one of only 26 countries globally to adopt such a system of governance.

It then proceeded to institutionalize this shift with a new charter in 2015 that created seven provinces and left many groups, including the predominantly Hindu Madhesis, railing for better political and economic representation.

Federalism means an autonomous ethnic state, but what does that imply for ethnic groups in Nepal?

Certainly the government acted prudently in deciding not to name those seven provinces on the basis of their prevailing ethnic identities, which would have triggered even greater outbreaks of ethnic conflict.

A Hindu sadhu (holy man) performs rituals at the Pashupatinath temple during the Hindu festival Maha Shivaratri in Kathmandu on Feb. 13. Nepal is made up of more than 125 different ethnic groups. (Photo by Prakash Methema/AFP)

One problem Nepal faces is that resources and manpower are not evenly distributed across the different states, a sore point as federalism is a union that is only possible among equals.

Yet this is hardly the case in Nepal, where earlier calls for an ethnic state diverted into conflicts over future provincial boundaries. Now public attention is focusing on which cities should be named provincial capitals.

Meanwhile, critics argue that in many regions of the country, federalism is no better replacement than the decentralization that came before it due to their geographically remote location.

In fact, provincial boundaries were drawn in such a way that enforced segregation, for example by dividing the Madhesis in the southern plains and the ethnic hill people in the north.

The situation becomes even more complex as ethnic divides and federalism prove to be uneasy bedfellows.

National statistics show the Brahmin and Chhetris comprise the largest of Nepal's more than 125 ethnic groups by making up over 28 percent of the population.

They occupy half of the country's geography but do not rank as a majority, despite Muslims and other smaller groups such as the Magar, Tamang, Newar, Yadav and Limbus claiming this advantage in other districts.

Each ethnic group has its own distinct identity, language and culture. So can a form of federalism based on a single identity hope to succeed when framed against such a divergent cultural makeup?

Consider that this web becomes even harder to untangle in light of Nepal's socio-political situation and the low level of tolerance shown for many ethnic groups.

The Madhesi, Tharu and other tribal people living in Terai are often treated as outsiders simply because they have darker skin and a more "Indian-looking" face.

Similarly, Buddhist monks and those who live in remote mountain regions tend to be seen as Tibetan due to their physiognomy, which some claim shows traces of Mongol blood; and people well-versed in the Indo-Aryan Khas language are considered pure Nepali.

The Madhesi community wants the entire Terai belt declared as falling under Madhesh State. Other ethnic groups have made comparable claims based on their ethnic identity in other parts of the country.

But if the population divides among ethic lines this could spell doom for whatever success is hoped for as a result of federalism.

A major challenge for any nation is the allocation and distribution of adequate financial resources to all levels of government. Without this, the states under a federal system would not be able to operate independently.

But trying to impose this system in a country like Nepal, where resources are extremely limited, is challenging to say the least.

Revenue collection is another thorn in the government's side as each of the states has their own rules for this, meaning the more backward states are likely to remain mired in their own misery.

What concerns me is that all of the expenses yoked to federalism will not be borne by the government or wealthy elites but by the poor Nepalis, while the rich and powerful keep on manipulating the weak state mechanism.

In other words: we can expect to see graft increase exponentially in the coming years.

A federal government can only work successfully when the public is better educated and politically savvy.

However, we could argue that Nepal's social motto of "unity in diversity'' still has the power to harness this heterogeneous community and unite it in a common culture that could facilitate the federal system.

If we look at the strengths of federal system — and there are a number — it creates an opportunity for everyone to ensure the public participates in local, regional and central government.

To make it work better in the context of Nepal, however, we should consider the following points:

As such, we can hardly posit federalism as a panacea to cure all forms of political chaos.

Yet we should learn from failed attempts at ethnic federalism in African countries like Ethiopia, Sudan, Nigeria and Congo.

Federalism does not mean a country has to be divided along ethnic or caste lines.

Moreover, to run a federal state in a financially sustainable way requires cooperation to ensure policies are imposed in a fair manner across the board.

All of Nepal's states must be considered equal.

People also need to be better educated about the proper use of their rights and responsibilities.