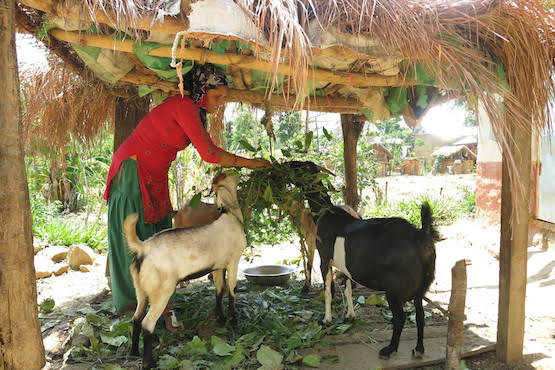 A Nepalese woman feeds goats that she bought with Caritas' help, to supplement her income from farming. (Photo supplied)

Caritas Nepal has developed programs to assist poor farmers with small land holdings maximize their output while at the same time educate and train them to use organic alternatives that they were unaware of.

Farmers are limited in their scale of production due to small land holdings, inadequate sources of irrigation, lack of training, low yields in main marketable crops, and limited access to markets.

Various private companies have also taken advantage of the situation by persuading farmers to use chemical fertilizers and pesticides. Detrimentally, this practice produces food that harms the health of farmers' families and consumers.

A lack of education and training has meant farmers are largely unaware of organic alternatives that can be made into fertilizers and used on their farms. Hence, Caritas Nepal has developed an Integrated Pest Management (IPM) program to assist poor farmers with small amounts of land.

Working in 35 districts, Father Bogati said the IPM program "has reached the grassroots directly" and uplifted the lives of at least 15,000 smallholder farmers and their families across the country in the past 15 years.

Caritas has strived to improve the lives of 25,000 people through 120 community-based cooperatives. Caritas' cooperative development and micro-enterprise promotion projects support them in at least 142 community locations where over 70 percent of households live below the poverty line.

Karamkashi Chaudhari, a mother of three from the Dang Valley in western Nepal is one example. For 10 months, the family of five could barely afford enough food. Chaudhari's earnings from casual labor work at a brick factory in a nearby town were inadequate.

Caritas provided her short-term training in sustainable agriculture practices and vegetable gardening. Over the longer term, she enrolled in a season-long farmer field school.

Head of programs, Manindra Malla, said Caritas has so far conducted more than 1,000 such field schools for smallholder farmers across the country.

Based on a successful pilot project in 2004, Caritas Nepal expanded the initial IPM program across the country. A Caritas report says, since the program began, it has observed an increase in rice and vegetable yields from 30 percent to 100 percent, depending on the location.

Through its technical programs and support grants, Caritas has motivated people to continue farming even though they may possess just a small piece of land.

When Chaudhari began implementing IPM practices on her 0.1 hectare of land she immediately saw improvements in production. With the money she made from selling her produce, she incrementally leased greater areas of land for farming.

"At first I didn't have enough land. Now I am successfully doing commercial farming on one hectare. I earned at least half a million rupees (about US$ 5,000) in a season," she said.

The lives of Chaudhari and her family have been transformed. Her eldest son works while the other two are studying. Finally, Chaudhari's husband has stopped working at the brick factory and toils away in the fields with his wife. A demonstration on how nets are used to capture insects by farmer groups in Kavre. (Photo supplied)

Kalicharan Tharu, a 31-year-old fisherman in Bardiya is one of the most successful and prominent members of his village's cooperative. Through the Kalpabrikchya Fish Farmer Cooperative, Kalicharan has increased the productivity of his small fish farm, expanding every year.

In the last three years, he earned more than a million Nepalese rupees and is on target to earn half a million this year.

At the core of the Caritas programs is a legal provision that recognizes cooperatives as 100 percent people-owned organizations that can develop initiatives to bring about social and economic changes in rural areas.

A cooperative raises finances from its members and provides economic interactions such as easy loans, savings, revolving funds and shares. The finances and projects are managed with the aim of addressing the "common good" of the community.

"The support of Caritas Nepal has changed my life in an amazing way, I am planning to expand my fish farm on an even larger scale," said Tharu.

Caritas' cooperatives support the work of social justice and advocacy for community groups. They provide a platform for improving the rights of women, children and small farmers at district, regional and national levels.

Dilli Ram Sharma, director of the Ministry of Agriculture, understood it would be difficult for the government of Nepal to work alone. He decided to involve non-government organizations in the programs.

Caritas is a member of the government's IPM national coordination committee which conducts monitoring and planning of IPM programs in the country. "Caritas Nepal has been operating under our guiding principles which have ensured we achieve high standards," he said.

"Caritas is the only organization that has maintained regularity and achieved continued success since the beginning," he added.