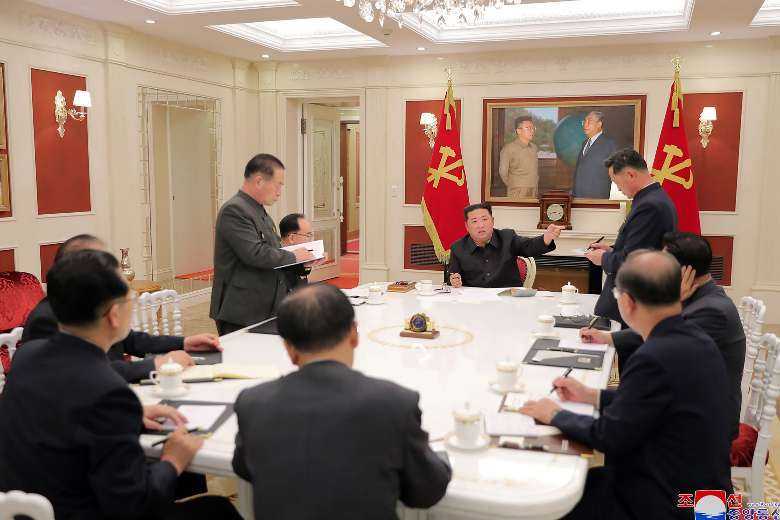 North Korean leader Kim Jong-un (center) at a meeting of the Presidium of the Political Bureau of the Central Committee of the Workers' Party of Korea (WPK) in Pyongyang in this picture released by the official Korean Central News Agency (KCNA) on May 18. (Photo: KCNA/ AFP)

A belligerent North Korea and its recalcitrant leader swear by isolation, so much so that Pyongyang always prefers to engage with the outside world on its own terms and has full control over what goes on within its own borders.

Even the Covid-19 pandemic is no exception to this unwritten rule in the communist country. So we thought.

The sudden surge in the coronavirus pandemic and equally swift cure of a million people in the hermit nation are shrouded in the mystery of its geopolitical isolation, and this time it happened ahead of US President Joe Biden’s maiden South Korean visit, starting May 21.

Just a week after disclosing the outbreak, the East Asian nation announced on May 18 that a million of the 1.7 million cases were fully cured. The anti-virus unit announced that 232,880 new infections and another six deaths occurred in the country. Those figures add up to 62 deaths.

The world is at its wit’s end to understand how more than a million people recovered so quickly in a country known for its limited medicines, medical equipment and health facilities. Above all, the country of 26 million has not vaccinated its population as yet, nor has it developed any drugs to treat the virus.

According to medical experts, the real case numbers may be far higher than what has been reported because of insufficient testing capabilities in the country.

Countries that faced outbreaks of a similar size to North Korea have confirmed thousands of deaths. Is it that the North is simply releasing people from quarantine after their fever subsides?

Before acknowledging it for the first time last week, North Korea had all along boasted that it had managed to keep out the virus. It also shunned millions of vaccine shots doled out by the UN-backed COVAX program.

After denying the existence of Covid-19 for nearly three years, North Korea has reportedly asked China and Russia for help.

The North also turned down aid offers from the World Health Organization (WHO) and South Korea simply because of the international monitoring attached to the emergency aid packages.

As far as the country’s leadership is concerned, isolation befits North Korea, a false notion indeed in a globalized economy. No wonder, North Koreans are accused of production of narcotics and counterfeit dollars, cryptocurrency manipulations and hacking to extort money.

At a May 17 meeting of the ruling politburo, the apex decision-making body of the Communist Party, it was stated that the country, which is facing US-led sanctions, could overcome the crisis on its own, reported the official Korean Central News Agency (KCNA).

While raising alarm over the outbreak at the politburo meeting, President Kim Jong-un criticized officials for their immaturity in coping with the crisis, KCNA said while adding that North Korea has mobilized its military to distribute medicine in the capital Pyongyang and other areas.

“The crisis facing us offered a test board to distinguish between the merits and demerits of all working systems of our state,” the 38-year-old president told the politburo.

According to South Korean broadcaster YTN, China is planning to provide doctors, nurses and medical supplies in large numbers to North Korea.

Russia’s foreign ministry said in a media release on May 17 that its Deputy Foreign Minister, Igor Morgulov, held a meeting with the North Korean envoy to Moscow to discuss various issues for cooperation, "including a response to the spread of Covid-19."

This means after denying the existence of Covid-19 for nearly three years, North Korea has reportedly asked China and Russia for help.

The country does not want to expose itself to what it calls political and economic viruses that come with medical aid packages.

The threat of new variants is looming large over the country due to unchecked transmission. On its recent outbreak, Mike Ryan, head of the WHO Health Emergencies Program, said it was worrying if countries fail to use “tools that are now available.”

WHO Director-General Tedros Adhanom Ghebreyesus said North Korea failed to respond to its request for more data on the pandemic in the country. The country does not want to expose itself to what it calls political and economic viruses that come with medical aid packages.

The outbreak in North Korea may be linked to a massive military parade conducted by Pyongyang in late April, featuring new weapons. The parade was attended by tens of thousands of soldiers and residents from around the country.

During the event, Kim spent days taking dozens of commemorative group photos with the participants, all of whom were without masks.

The outbreak came even as the White House confirmed Biden was considering a trip to the demilitarized zone on the North Korean border. The North Korean nuclear program is high on the agenda during Biden’s visit.

Dumping its neighbor and largest trade partner China, new South Korean President Yoon Suk-yeol has decided to participate in the Indo-Pacific Economic Framework (IPEF), promoted by the United States to counter China's influence in the region. During his poll campaign, Yoon vowed to take a harder line against North Korean provocations.

The IPEF initiative, which was started by the US during the East Asia Summit last October, is expected to be launched during the Yoon-Biden summit beginning May 21. Biden then leaves for Japan, which often crosses swords with North Korea over missile testing.

If North Korea and Kim have embarked on another ‘arduous march,’ no one can help the hermit nation.

North Korea is expected to conduct its seventh nuclear test this month as was hinted at by Kim at the military parade in late April.

The Korean Times quoted Kim Tae-hyo, the first deputy director of the National Security Office, saying at a press briefing that North Korea probably won’t conduct a nuclear test this week but may opt for another intercontinental ballistic missile (ICBM) test.

Besides, a weapons test could overshadow Biden's focus on China and other regional issues. It can also underscore the lack of progress in denuclearization talks despite the efforts of the US administration and international bodies,’ including the Holy See and the Bishops’ Council of South Korea.

The Vatican has hosted many international conferences aimed at Korean unification and the bishops’ council undertakes many humanitarian initiatives to bring the two Koreas closer.

A major Covid-19 outbreak could unleash a humanitarian crisis and the chances of North Korea ending up with the worst death and infection rates in the world are high without international aid. As of now, North Korea is not part of any regional organization because the country simply prefers isolation over cooperation.

But if North Korea and Kim have embarked on another ‘arduous march,’ a euphemism for a devastating famine in the 1990s that claimed the lives of hundreds of thousands of people, no one can help the hermit nation.