The devil is always against humanity because of envy, the pope says at a Mass to celebrate St. Michael the archangel 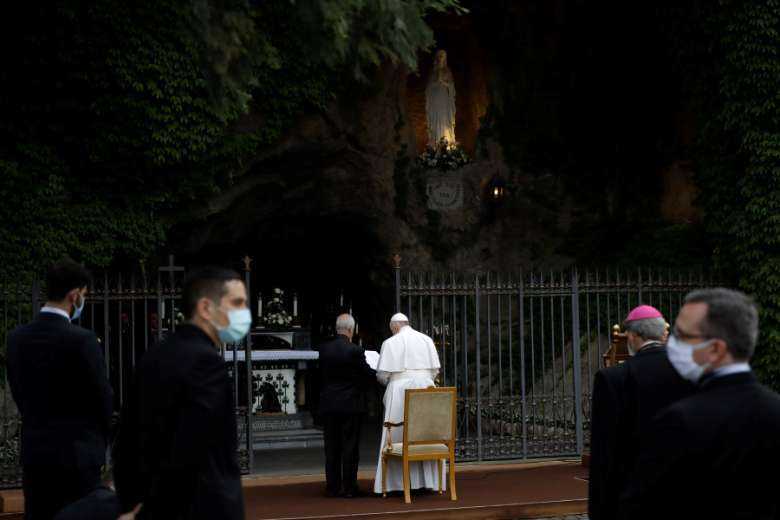 Pope Francis prays during a rosary in front of the replica of the Lourdes Grotto in the Vatican Gardens on May 30, 2020. (Photo: AFP)

The devil's mission is to destroy any peace and harmony in people's lives and relationships, Pope Francis said in a homily at Mass with members of the Vatican police force.

"The devil is always against humanity because of envy," and he is the one causing hostility and conflict, the pope said at the Mass to celebrate St. Michael the archangel, the patron saint of the police force, known as the gendarme.

While the feast of the archangels Michael, Gabriel and Raphael is Sept. 29, the pope celebrated the Mass Oct. 2 in the Vatican Gardens at a replica of the grotto at Lourdes, France. The Vatican published the complete text of the pope's homily on Oct. 4.

The devil's existence and his power are real, the pope said, and look at how often people yell at each other or how often there is a loss of composure, tranquility and "harmony."

"Who's planting this? The devil," he said. "Wars are fruit of the devil, I am not afraid to say so."

"This is the 'mission' of the devil: to destroy harmony, destroy the beauty that God made for us," the pope said. "That is why Jesus has come, to give his own life to resolve this problem and defeat the devil on the cross."

The final and victorious battle of St. Michael with the devil, as described in the Book of Revelation, is a reminder of one's own daily struggle in life

But even after the fall of original sin, the pope said, God "did not leave us alone. He gave us the angels who accompany us" throughout one's entire life like a travel companion "to defend us" from the devil's "policy" of destruction.

People need to remember to pray to their guardian angel, he said, and they should thank God for this gift and for the brave leader of this army of angels -- St. Michael.

The final and victorious battle of St. Michael with the devil, as described in the Book of Revelation, is a reminder of one's own daily struggle in life and the need to fight, he said.

Living a Christian life is not easy, he said. "There are always difficulties" -- in the family, with relatives or at work -- that are there to divide people "and sow evil."

In those times, he said, "let us pray to St. Michael, who always defeats the devil," to one's guardian angel for protection and to God for "the grace to clearly understand that life is a battle; when there is no struggle," there is no life because "the dead don't fight. The living always struggle."

Alongside the more famous Swiss Guards, the gendarme corps, consisting of about 130 men, is responsible for papal security, crowd control in St. Peter's Square and safety, law and order within the Vatican.