Hope of a unified Korea remains a long shot 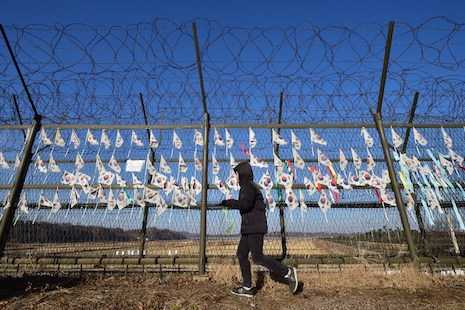 Rarely have North and South Korea appeared so keen to talk up reunification as they have in recent weeks.

At the end of January, South Korea announced proposals for an inter-Korean roadmap towards reunification that starts with the building of economic ties and greater cultural exchange.

With few other avenues for promoting its ideas, an official of North Korea’s Ministry of Foreign Affairs published an editorial in China’s state-run Global Times earlier this month calling for reunification that maintains the political status quo on both sides of the Korean Demilitarized Zone (DMZ).

Seventy years since the peninsula was divided, there’s still one major problem, however: Neither side has gotten close to producing a reunification blueprint that could actually work.

Since President Park Geun-hye announced her “unification as jackpot” policy last year, a new committee comprising 70 academics, government officials and business people chaired by Park herself has started work to prepare for reunification.

Its first major proposals at the end of last month included the creation of cultural centers to bridge the ever-growing gap between the two countries and proposals for a train linking Seoul and Pyongyang. No other details about how the rejoining of the two countries could work have been proposed.

While the South’s ideas so far have shied away from addressing the thorny issue of what the political system might look like after reunification, this key issue is the main focus of the North’s most recent proposal this month.

Written by Kim Ye Jin, a researcher at the Institute for Disarmament and Peace under the Ministry of Foreign Affairs, it calls for the two political systems in the North and South to remain unchanged. This is the greatest failing of the North’s proposal and a reminder of why such a process remains so elusive.

“Two different systems, diverse political activities and various forms of possession can coexist in a state,” writes Kim. “It has been proven in practice in other countries.”

The closest such example is East and West Germany in 1989. But then, the disparity in ideology and wealth on each side of the Berlin Wall was significantly smaller compared with the two opposing sides of the DMZ. It is also difficult to imagine two systems that are more different.

There is no precedent for such a situation for a very good reason. Starkly different political ideologies are the key reason why states split and go to war. Never do they recouple under such circumstances without one ideology defeating the other, especially when those ideologies are so different.

North Korea remains the most isolated and economically left-leaning state in the world and the least democratic, while South Korea has become one of the most consumer-oriented brands of capitalism with its pervasive plastic surgery, super-fast internet and sugary pop culture.

The South ranks among the most democratic nations in Asia in a region where plenty of countries — including the North — hold elections but few actually result in a change of administration, which is the true test of any country’s democratic credentials.

In stark contrast, the North remains among the worst rights violators on the planet — its power not yet permitted to extend beyond one despotic family let alone to another political party.

The impossibility of recoupling the two Koreas as they are configured today becomes all too apparent as soon as the process is considered in practice.

North Korea stops its citizens from traveling freely within the country even now. Would North Koreans be allowed to travel to the south following reunification? And if so, how would the North stop them heading to the South en masse?

Given Pyongyang goes to enormous lengths to stop its citizens finding out about the South, how would there be any true reunification of people on both sides of the DMZ? And how could the North Korean regime survive if it didn’t maintain these highly restrictive policies?

In the past 70 years, the two Koreas have failed in almost every joint scheme they have started. A North-South tourism resort has remained shuttered for more than five years, and the last train station before the DMZ on the South side doesn’t function.

Although both sides continue to run the Kaesong Industrial Complex just inside the North, the facility is routinely closed and the Southern companies that operate there have never profited from the venture. It’s considered the only joint success in 70 years, but by any normal standard of measurement it is a resounding failure.

As indicated in two commentaries by Chinese analysts in response to Pyongyang’s proposal last week in the Global Times, the North’s motivation for proposing reunification based on the political status quo appears to represent little more than the latest effort to preserve the regime.

“Given the current situation in North Korea, we can draw a subtle signal from the article; namely, that the state is trying to seek a pragmatic long-term strategy,” Zhao Lixin, director of the Department of International Political Science at Yanbian University on the Chinese border with North Korea, wrote in the Global Times on February 9.

Indeed, almost everything North Korea says and does is designed to preserve the rule of the Kim dynasty. Pressure on the regime has intensified even more in recent months after the UN Security Council introduced the North’s appalling rights abuses into its permanent agenda amid growing calls to hold Kim Jong-un accountable at the International Criminal Court in Rome. It seems the North is trying to find an exit strategy from its shrinking corner.

Analysts point out that the South’s President Park has become motivated to push reunification in light of her own political realities, chief among them growing discontent over her government’s feeble, rudderless performance.

But while North Korea’s misled population would no doubt relish the chance for reunification, without really appreciating what this would mean given a lack of knowledge over what happens in the South, southerners themselves appear increasingly turned off by the idea.

As the number of Southerners who remember a united Korea rapidly diminishes, young people who have grown up afraid of the North have become increasingly disillusioned with the idea of reunification, according to polls over the past decade.

One such survey at the end of January found that only 5.4 percent of South Koreans in their twenties said that they view North Koreans as sharing the same bloodline.

Park’s choice of the phrase reunification “bonanza”, the teenage slang word “daebak” in Korean, does not appear to be helping to bolster the appeal to the very people that would be responsible for initiating reunification if and when it eventually happens.

The fact that both North and South Korea have placed greater emphasis on reunification in recent weeks is at least positive in terms of the possibility that the North and South might resume talks, which in turn would de-escalate tensions.

Seoul has recently said it is willing to hold talks with no preconditions, even as the North test-fired what it said were new anti-ship rockets off the coast last week. With both sides remembering this year the 70th anniversary of the painful split of the Korean peninsula, hopes are high that dialogue will increase in the coming months.

But given that both sides have largely failed to jointly achieve anything over the same period, the possibility of imminent reunification seems implausible, at least without a sudden collapse of Kim’s regime.

And people have been predicting that since the days Kim’s grandfather ruled the country more than two decades ago.