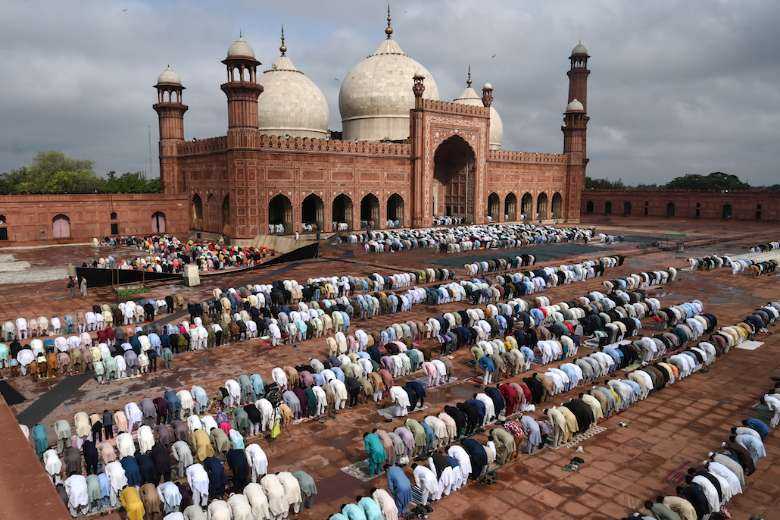 Muslim devotees offer prayers at the historical Badshahi Mosque during Eid al-Adha, or the Festival of Sacrifice, in Lahore, Pakistan, on July 21. (Photo: AFP)

The year was 1997. Bishop John Joseph, Pakistan's first Punjabi bishop, led a rally of about 10,000 people on Aug. 11 to demand implementation of the historic speech of the nation’s founding father Mohammad Ali Jinnah.

The rally, which started at the bishop's house in Faisalabad, was also joined by veteran fighter pilot Cecil Chaudhry and Shahbaz Bhatti, head of Pakistan's Christian Liberation Front party. All three were later charged with high treason.

However, the first information report was sealed after authorities learned that the trio comprised a Catholic bishop, a retired group captain and a popular politician. It was a period of a growing movement against the misuse of blasphemy laws. Then came the fall.

Bishop Joseph killed himself in 1998 in front of a courthouse after a Christian, Ayub Masih, was sentenced to death for blasphemy. Bhatti, who later became Pakistan’s first federal minister for minorities affairs, was gunned down in 2011 for criticizing the harsh blasphemy laws.

A passage about Chaudhry was removed from a chapter titled “Hamare Ghazi aur Shaheed” (Our victors and martyrs) in a grade six Urdu textbook. The trend continues as the state discourages minority leaders to utter the term “forced conversions” but fails to punish the perpetrators.

Even though Pakistan’s constitution guarantees equality of rights, religious minorities have continued to witness violations

Jinnah’s speech was removed from official records under military rule spanning several decades. The speech emphasized equal rights for all citizens, but this vision has been repeatedly ignored in the following years.

The struggle continued and in 2009 the date of Aug. 11 was designated as National Minorities Day. Since then, the sacrifices and roles of religious minorities in Pakistan are honored annually at government-supported programs.

Two days ago, Qibla Ayaz, chairman of the Islamic Council, joined a Church of Pakistan bishop at a ceremony to launch a book titled Gems and Jewels: The Religions of Pakistan at the Christian Study Centre in Rawalpindi. Murree Brewery sponsored a book that explores the long-ignored places, cultures and status of religious minorities.

By the way, Islamic laws prohibit the production, supply and use of wine in the country, except for non-Muslims, who can buy and drink liquor in a limited quantity. The Christian community, with a permit from the government, can buy up to six bottles of wine a month. In the past, it could be purchased on showing a letter from the parish that validates the customer’s Christian identity.

The book, which is being promoted by state officials, is meant to showcase the soft image of Pakistan and tell the world that people of all faiths live peacefully together.

Ejaz Alam Augustine, Punjab’s minister of human rights and minority affairs, claims 22 blasphemy convicts have been released during the tenure of his party.

“We have prepared a draft on the issue of forced conversions in Pakistan. But in addition, we need judicial reform and social awareness about this critical issue. For the first time, interfaith subjects are being introduced including the Bible, Guru Granth and Gita. Hate material has been removed from 188 books,” he claimed at an Aug. 10 convention held by the Center for Social Justice in Lahore.

Despite his claims, Augustine admitted that he was “asked by his friends to go into hiding” in April when he notified the Punjab Curriculum and Textbook Board to shift all Islamic content — including naat (a devotional hymn to the Prophet Muhammad) and topics on his life — to the textbooks of Islamic Studies/Islamiyat, a subject compulsory only for Muslim students. The move resulted in fierce opposition from Islamic clerics.

We celebrate the role of Christians in creating and protecting Pakistan. We have served in the education, health and social sectors

Father Mushtaq Anjum, the first Pakistani Camillian priest, believes Pakistan's minorities are not yet free in the real sense of the word.

“The 74th independence celebration of Pakistan calls each Pakistani of the majority to think beyond religious discrimination and exploitation done in the name of God. There is a huge backlog. A lot needs to be done for the revival of spiritual formation of both the community and leaders,” he told me.

Despite all the darkness, there is hope. According to a Catholic professor who is part of the single national curriculum drafting committee, the role of minorities and Jinnah’s famous speech are explained in upcoming textbooks.

In a St. Anthony's Mass at the bishop’s house on Aug. 10, Archbishop Sebastian Shaw of Lahore recommended that National Minorities Day should be called the Day of Msaawat (equality).

“We celebrate the role of Christians in creating and protecting Pakistan. We have served in the education, health and social sectors. Excel in your fields. Let us stay sincere and love our country,” he said, reading out Jinnah’s speech.

Let us observe this day as a celebration of religious diversity in our homeland. Pakistan Zindabad!