Young protesters are seen as fighting for democracy, liberty and the rule of law Activists Ivan Lam (left) and Joshua Wong (center) prepare to board a police van at Lai Chi Kok Reception Centre on Dec. 2 before being transported to court to hear their sentences. (Photo: AFP)

A court under Hong Kong's Beijing-controlled administration has sentenced three young activists to jail for their role in a pro-democracy protest last year.

West Kowloon magistrates' court in the former British colony on Dec. 2 handed out jail terms to Joshua Wong, 24, Agnes Chow, 23, and Ivan Lam, 26.They were convicted of organizing an unlawful assembly outside the territory's police headquarters in June 2019.
Donate to UCA News with a small contribution of your choice
Wong was sentenced to 13 months and 15 days in jail, Chow to 10 months and Lam to seven months.Judge Wong Sze-lai said the "offending period of the three" lasted for around 15 minutes and the court had considered "all the facts of the case, including that they committed the offense in a joint enterprise under the prevailing circumstances of increasing incidents of social unrest and large-scale public protests, which in the court's view made the case more serious."Wong, a Protestant Christian, rose to prominence a decade ago as a bespectacled teenager who exhorted students to oppose the Chinese Communist Party's indoctrination in schools. His persistent activism has made him one of the most high-profile leaders of Hong Kong's pro-democracy movement.Chow, 23, is a Catholic university student who set up a pro-democracy party along with Wong.Lam and Wong established a Hong Kong student activist group called Scholarism.The student group stopped functioning in 2016 when they, along with other young people, started pro-democracy political party Demosisto. The party was dissolved in June 2020 as China tightened measures against the pro-democracy movement.Christian groups have been conducting prayer campaigns ever since the three were arrested last month after the Beijing-controlled administration crushed the city's pro-democracy movement.
Related News 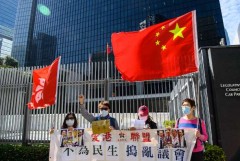 Thank you. You are now signed up to Daily newsletter
"Please pray for Agnes Chow, Ivan Lam and Joshua Wong, brave, beautiful young people who peacefully fought for the freedom of all people in Hong Kong and China," said a posting of Catholic USA and World Today.Their sentencing is part of China's aggressive crackdown on political opposition in Hong Kong, which was roiled by months of pro-democracy protests last year.They pleaded guilty to a charge of unlawful assembly during a June 2019 protest when thousands of people gathered outside police headquarters. Many Catholics and other Christians took part in the democracy protests last year.

In June, China imposed a sweeping national security law on Hong Kong to limit dissent. More than two dozen people have been held under it, including Chow and Jimmy Lai, the Catholic founder of the city's biggest pro-democracy newspaper.

Wong, released from jail only a few days before the demonstration, had not organized the protest as he had done in previous campaigns. But his use of a loudspeaker in leading the crowd was cited as evidence of "incitement to take part in an unauthorized assembly knowingly."

"No riots, only tyranny," he chanted with the protesters.Claudia Mo, a former lawmaker in Hong Kong, called the verdict "very saddening but not unexpected."The three activists are touted as the first generation in Hong Kong to champion democracy under the rule of the Chinese Communist Party.Their group spearheaded the protests against a move to start a national education curriculum in Hong Kong schools.Leaders in the United States and Britain criticized the sentencing of the activists."The sentencing of Joshua, Agnes and Ivan reminds us of the courage and perseverance of Hong Kongers as well as the failure of Hong Kong's government to uphold its commitments to its citizens," said US Senator Marco Rubio, co-chair of the Congressional Executive Commission on China."Hong Kong's authorities should be proud to have young people like Joshua, who champion democracy, liberty and the rule of law. Instead, on the orders of the Chinese Communist Party, they lock them up and persecute them," stated the website of Lord Alton of Liverpool, a Catholic who sits as an independent crossbench peer in the UK House of Lords, reported Catholic News Agency on Dec. 2.The bishop emeritus of Hong Kong, Cardinal Joseph Zen, had flayed the crackdown in Hong Kong by Beijing in an interview on Nov. 22."Even people outside of the Church, they say, 'Why isn't your pope saying anything against what China is doing?" Zen said in a video clip. "It's very sad."Britain controlled Hong Kong until 1997 when it was transferred to China under an agreement that stressed its independent economy and "one country, two systems" framework.
SHARE YOUR COMMENTS
×
SHARE YOUR COMMENTS